Review #2 of 2: The Duchess of Malfi by Hidden Room Theatre
by David Glen Robinson

The Hidden Room and Artistic Director Beth Burns have scored another spectacular success with their production of The Duchess of Malfi. The tragedy is a Jacobean drama written by Englishman John Webster in 1612 and 1613. As with many Jacobean (English Renaissance) dramas, the play is based on actual events in the lives of historical figures. The Duchess of Malfi, real name Giovanna d’Aragona, Duchess of Amalfi, was a tragic figure caught up in the dynastic struggles of the Italian nobility in the 16th century.

The Hidden Room’s production captures the tragedy, horror, and violence of the play, and also its tender love story and the nuanced relationships among the characters. Naturally, with all the skills of The Hidden Room, the production avoids presenting any cardboard cutout characters or stereotypes of Italian nobles. It does this largely by adherence to playwright Webster’s poetic language throughout (which makes the play a great read as well) and a four-star cast of Austin’s best actors. 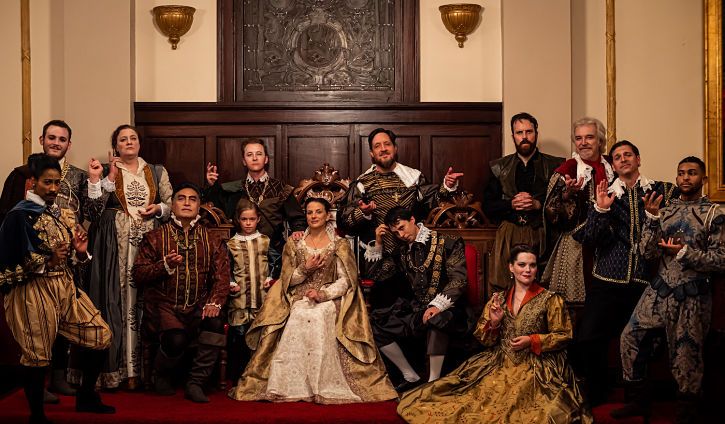 The protagonist is the title character, played by Liz Beckham, and the play follows the events of her life in a direct, fast-paced, and dynamic plot. Issues of class, corruption in the church, decay of the upper classes, currents of religious skepticism, treachery in high places, and faithfulness in low all crowd into the story like feeding kittens jostling one another on their queen’s belly. 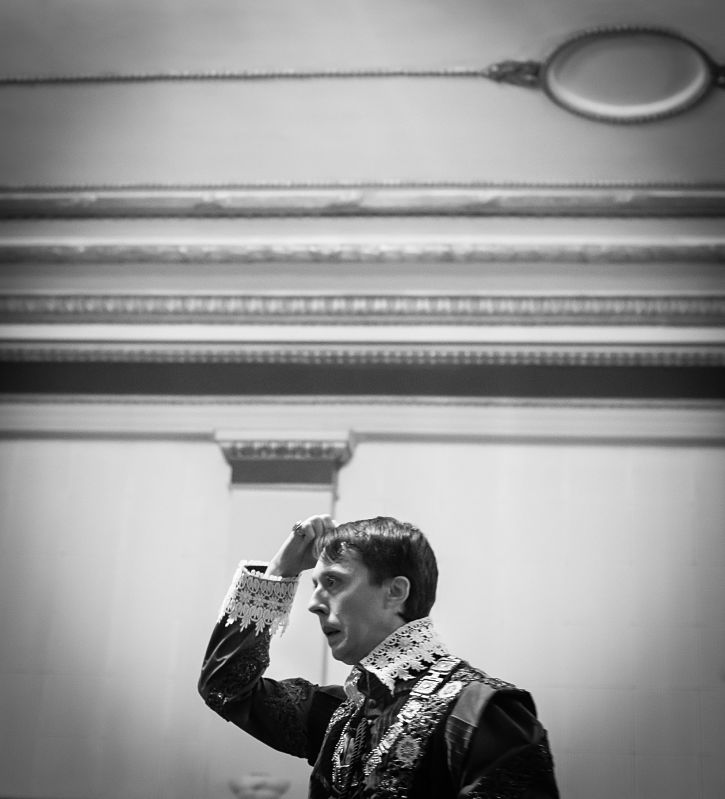 It all starts with the shock (for the 17th century) of the duchess’s secret marriage-for-love to a commoner, the steward of her court (Antonio, played by Brock England). Separately, the duchess’s twin brother Ferdinand, Duke of Calabria (Ryan Crowder) had hired a murderer and malcontent, Bosola (Judd Farris), to spy on all the duchess’s activities, the intent being to keep her from marriage so Ferdinand could control her uterine assets in the furtherance of his political designs. Bosola had served five years in the galleys for murder and was thought the perfect instrument for his profession. The flaw in all his plans was a keen and biting conscience. Ferdinand’s careful deviousness was undone by choleric rages. This may have been an early 17th century portrait by Webster of bipolar disorder. It was undiagnosed as such at the time; daggers and poniards heightened its severity. Ryan Crowder as Ferdinand never lacked the energy and skill required to enact the emotional extremes.

The Cardinal (Robert Matney), brother of Ferdinand and the duchess, was the acme of clerical corruption and murder. He employed his married mistress Julia (Amber Quick) in his schemes, coldly putting her at risk. He was a poisoner. 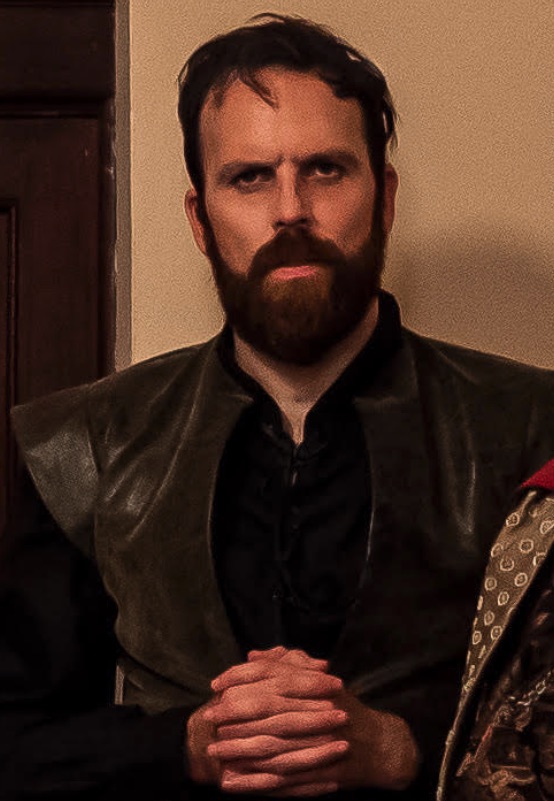 The designs, hopes, and aspirations of all the characters came undone in the second act, leaving only a minute thread of lineality to return Nature to its proper courses. Webster seems to insist on an ending of stern morality, punishment for all, perhaps to deflect charges of impiety against him. The example of kissing a poisoned Bible and dying is a blatant nod to skepticism. The incident gives us a set of symbols, a set that believers and nonbelievers alike can easily interpret.

Nothing illuminates an involved story like excellent performances, and The Duchess of Malfi is full of them. The heart, soul, and agony of the play reside in Judd Farris’s character of Bosola, the murderer and spy. Farris’s delivery is crystal clear to the entire audience in the in-the-round play presentation. Bosola repents some of his acts in an unusual plot twist, but then gives in to his frustrated rage and goes on to win the play’s trophy for high body count. In Bosola, the play pivots and pivots again. Farris’s efforts to bring that all about are strong but nuanced and as adroit as his daggerwork. His enactment of Bosola seems partially to reprise his character of Hotspur in “Henry IV”, a powerful figure, yet one languishing in moral quandary.

Liz Beckham cuts a petite figure but her character is very strong, and she never seems engulfed by her brocades and crown; she commands her raiment. Her voicework is flowing and smooth and often comes to a sharp edge for emphasis at the ends of utterances. She is mindful to move scenes forward. One could listen to Beckham’s speeches for hours. When she is reduced to a white nightdress in prison, the costume choice gives yet another dimension to the duchess: nightdress—bedrooms—sleep—dreams—the duchess becomes a universalized figure descending from the realm of dreams directly to us, advising us to review our lives and memories against the end. Her musings before Bosola shortly before her death give additional bite to the play at that point. 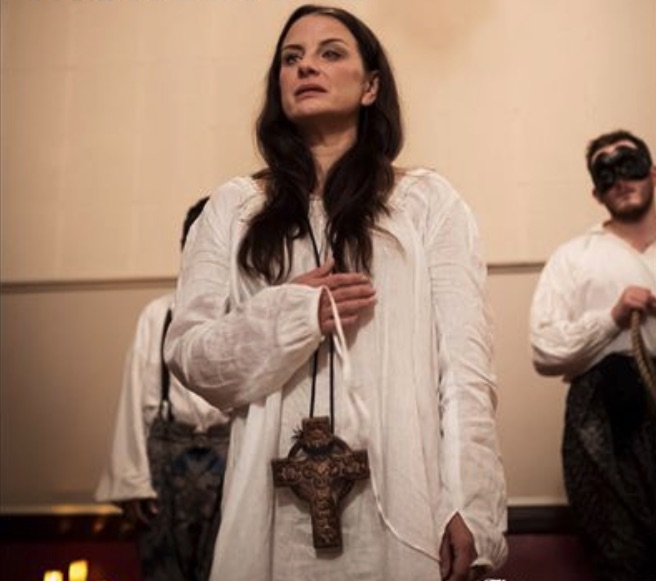 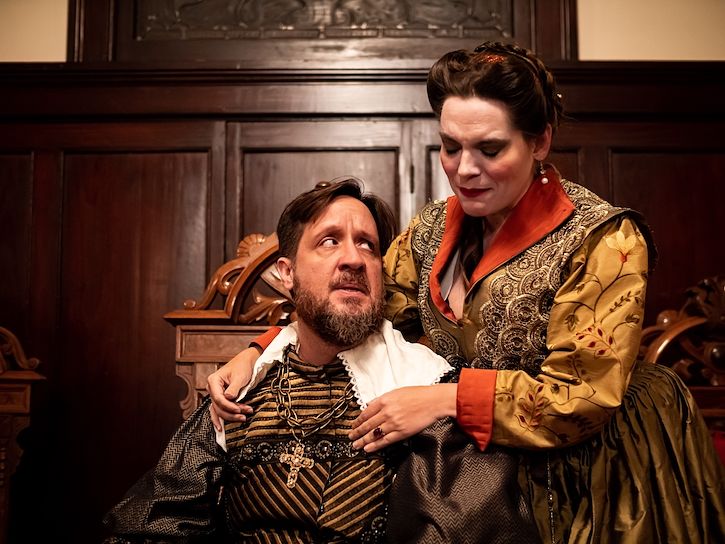 Robert Matney as the Cardinal enacts his evil with perfect diction and highly skilled application of the vocabulary of Renaissance theatrical gestures. His whispered asides are heard throughout the room; this is no mean rhetorical skill. Matney always supports the other actors on stage, even as his character poisons them.

Amber Quick has a commanding feminine presence on stage, with a measure of vulnerability. The combination of qualities creates an indefinable and therefore intriguing vibe about her. As Julia, Quick presents as tragic a figure as the duchess, but for different reasons. Julia was responsible for her own bad, perhaps evil, choices, including becoming the Cardinal’s mistress while married to the aged noble Castruchio, played by Todd Kassens. Boredom with the Cardinal set in, relieved by the spice of intrigue, beautifully portrayed by Quick.

As the doctor, Kennah Benefield found exactly the right tone. At the time, doctors were as much conjurers and mendicants as they were herbalists. Benefield gets it just right, and conveys the rarity with witchy mendacity.

Jill Swanson as Cariola and Nathan Jerkins as Delio both performed a very important service to the play. They played, skillfully, the servant and friend of the Duchess and Antonio, respectively. Unlike several other characters blown before the winds of fate, these never wavered in their loyalty and devotion to mistress and friend. Cariola entered prison with the duchess, faithful to the end. The theme of faithfulness served to heighten by contrast the other themes of treachery and murder so dominant in the play.

The period costume design is spectacular. The costume ensemble was internally harmonious, with many design schemes executed in brown, burgundy, purple, and black. The costume leaders were Jenny McNee, Liz Schneider, and Kaylee Silcocks, supported by eight stitchers.

And now for the lagniappe. At the beginning and end of the show the entire cast in costume took the space and conducted a Renaissance style court dance to the musical accompaniment of the Burkett ensemble. The colorful, toney, tasty, whimsical touch was the perfect set of bookends to this Jacobean drama. Choreographer Kelly Hasandras receives credit as Master of Dance. Well done.

The Duchess of Malfi is recommended to everyone with even the slightest interest in theatre. But be aware: preparations should be made for full enjoyment of John Webster’s literary and theatrical masterwork as viewed through the Hidden Room’s lens. Wikipedia offers a longish synopsis of the play. Reading it beforehand will ease one’s circuitous course through the plot. And here’s a pro tip: the theatre space is a long, relatively narrow room. Sit near the center to avoid back-and-forth tennis match neck, hear the actors and music better, and minimize the unavoidable distraction of the entrance/exit doors slamming throughout the play. Make a few preparations and the riches of this play are all yours.

The Duchess of Malfi
by John Webster
Hidden Room Theatre 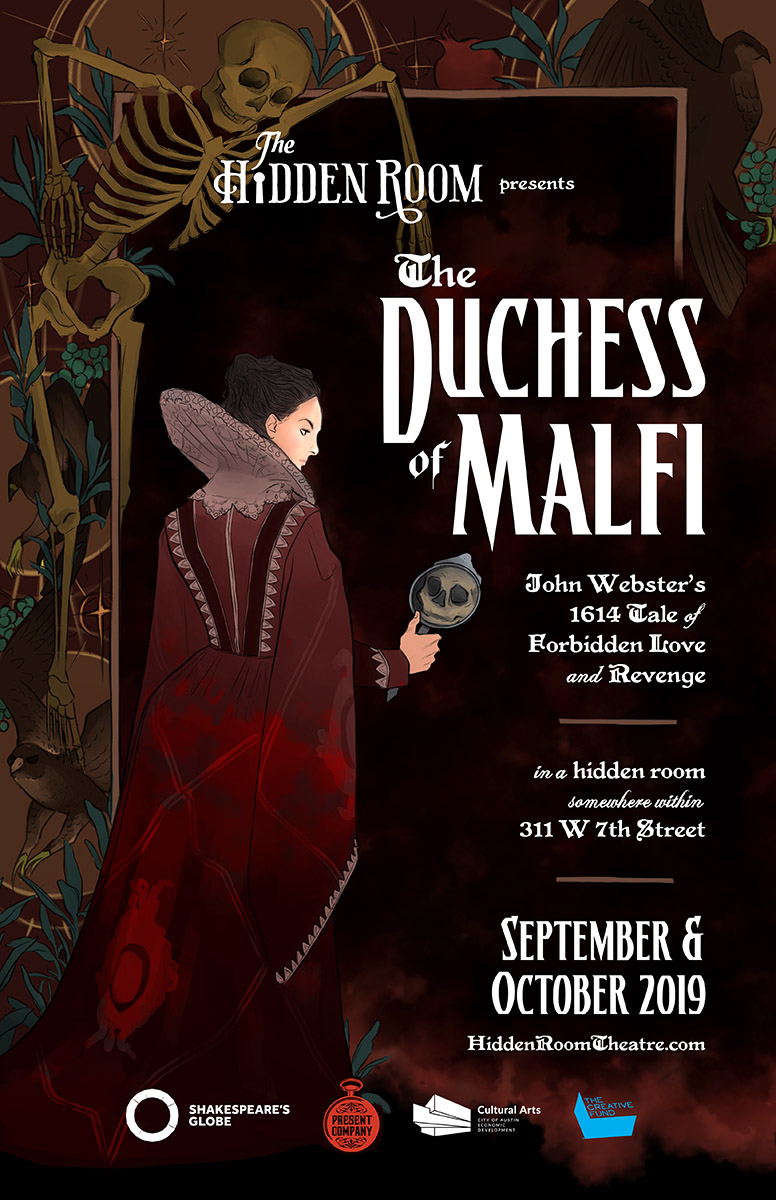