Review: We Are Proud to Present a Presentation About the Herero of Namibia. . . by Street Corner Arts
by Michael Meigs

To what extent may good and decent people like ourselves be held responsible today for the vast evils of racism and genocide committed in modern history against the innocent and defenseless?

Put this way, it's an abstract and chilling theme statement.

We Are Proud to Present  a Presentation about the Herero of Namibia, Formerly Known as Southwest Africa, from the German SudwestAfrika, between the Years 1884-1915 -- the title's more than a mouthful and it's intentionally awkward and semi-literate. "To present a presentation"? What is this, junior high school? Or a troupe of the earnest and naïve?

Well, yes. At least that's what we're encouraged to believe. Last Friday's performance at the Hyde Park Theatre got rolling amidst celebration, as the six participants, all well known to the theatre in-crowd, were enthusiastically greeted and hugged by audience members. Many were theatre-makers themselves, pleased to find that the actors were doing their warm-ups on and around the intimate stage space. There was a rousing we're-all-in-this-together feeling. The proceedings began a few minutes late, but Valoneecia Tolbert's boisterous, breathless no-curtain speech further spurred the excitement about what looked to be a merry, participatory 90 minutes of fun. 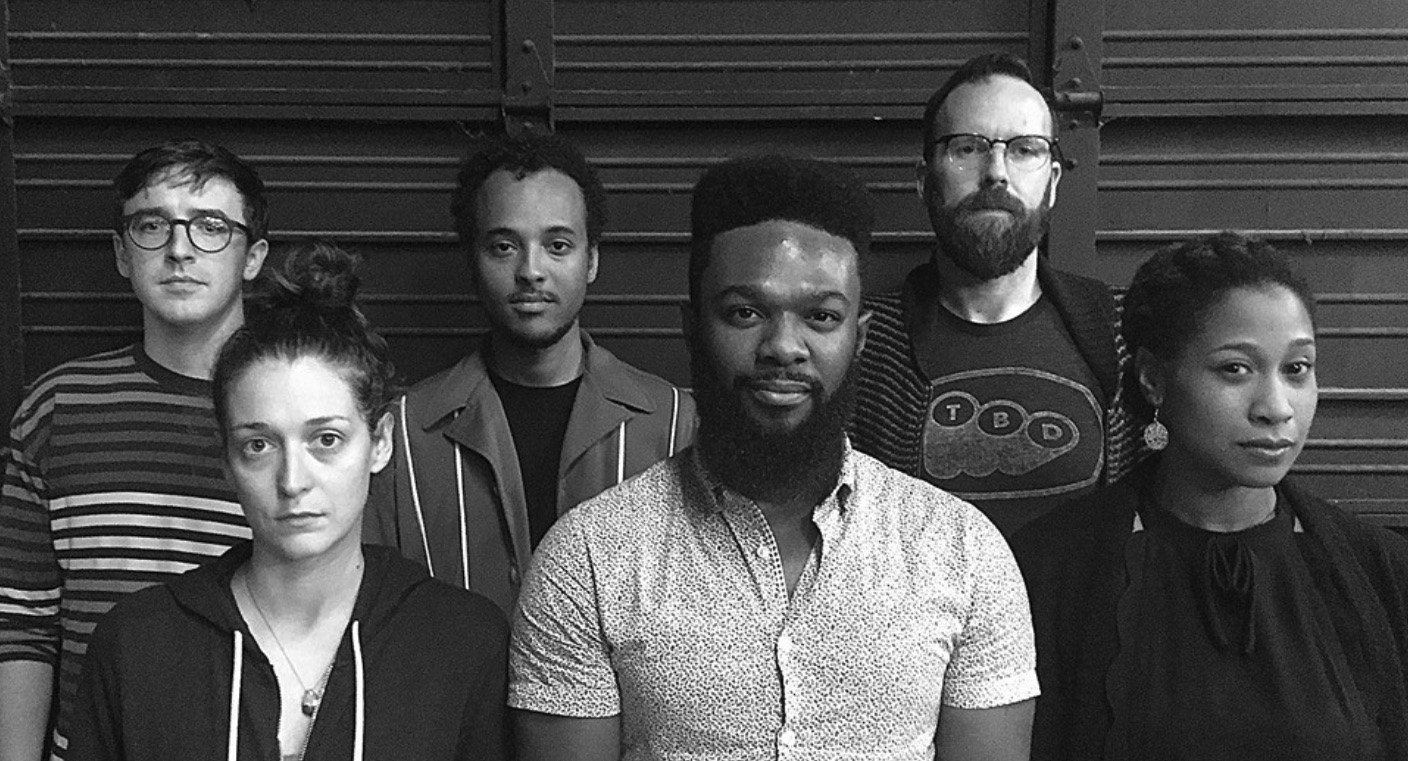 There's an arc to We Are Proud to Present, carefully crafted by director Liz Fisher and her co-conspiring thespians. The fiction is that these six players -- two women, four men, who can also be sorted into three people of color and three who're white-bread Caucasians -- are an ensemble seeking to improvise a framework and story to bring alive the thirty years of history recounted mockingly and at breakneck speed in the second scene of the action. How can they reach back more than a century and infuse with meaning events that are little known and almost undocumented? Again and again they seek to improvise action and stories, always running into the frustration that correspondence preserved from the era is fragmentary, one-sided and deliberately vague.

Your audience barks with laughter early in these efforts, amused by stereotypes both of historical characters and of clueless actors in search of meaning. There's plenty to amuse. Tolbert is the central member of the ensemble, the kt shorb or Katherine Wilkinson of the expedition to discovery. Each actor is vivid in his or her own persona: who doesn't recognize the earnest demeanor of Judd Farris or the intensity of Amelia Turner? The choirboy Zac Carr, whose eyes scan fiercely and whose mind works a mile a minute? Matrex Kilgore and Jeremy Rashad Brown, quicksilver young heavyweights of Austin stages?

This is a profoundly disquieting and personal answer to that thematic question. It's a seduction of the audience, followed by a violent mugging of the spectators' emotions. It ends with a pitch of emotion so shocking that one sits transfixed as if on an electric chair, despite one's violent desire to reject the answer and walk out. Then there follows a long, stunned, mostly silent coda in which words -- any words -- have been stripped of import. Brown, the last actor standing, almost totters. Three times he tries to speak, getting no further than a hoarse initial burst of air, a "Wh. . . ." that can't articulate a thought, let alone a question or God forbid a conclusion.

This production and these performances shook me so deeply that I woke up suddenly after only two hours of sleep that same night, realizing that my mind and emotions had been in struggle in my subconscious , trying to formalize the very opening paragraphs written above.  I left words scrawled and almost illegible in a notebook on my desk, where I've been avoiding them now for the last five days.

The hurt hasn't yet healed, but We Are Proud to Present is initially so entertaining and then such a conflagration of our unconscious assumptions that it is vital, necessary and ultimately inescapable theatre.

Click to view the Street Corner Arts program for We Are Proud to Present  a Presentation about the Herero of Namibia, Formerly Known as Southwest Africa, from the German SudwestAfrika, between the Years 1884-1915

We Are Proud to Present a Presentation About the Herero of Namibia. . .
by Jackie Sibblies Drury
Street Corner Arts 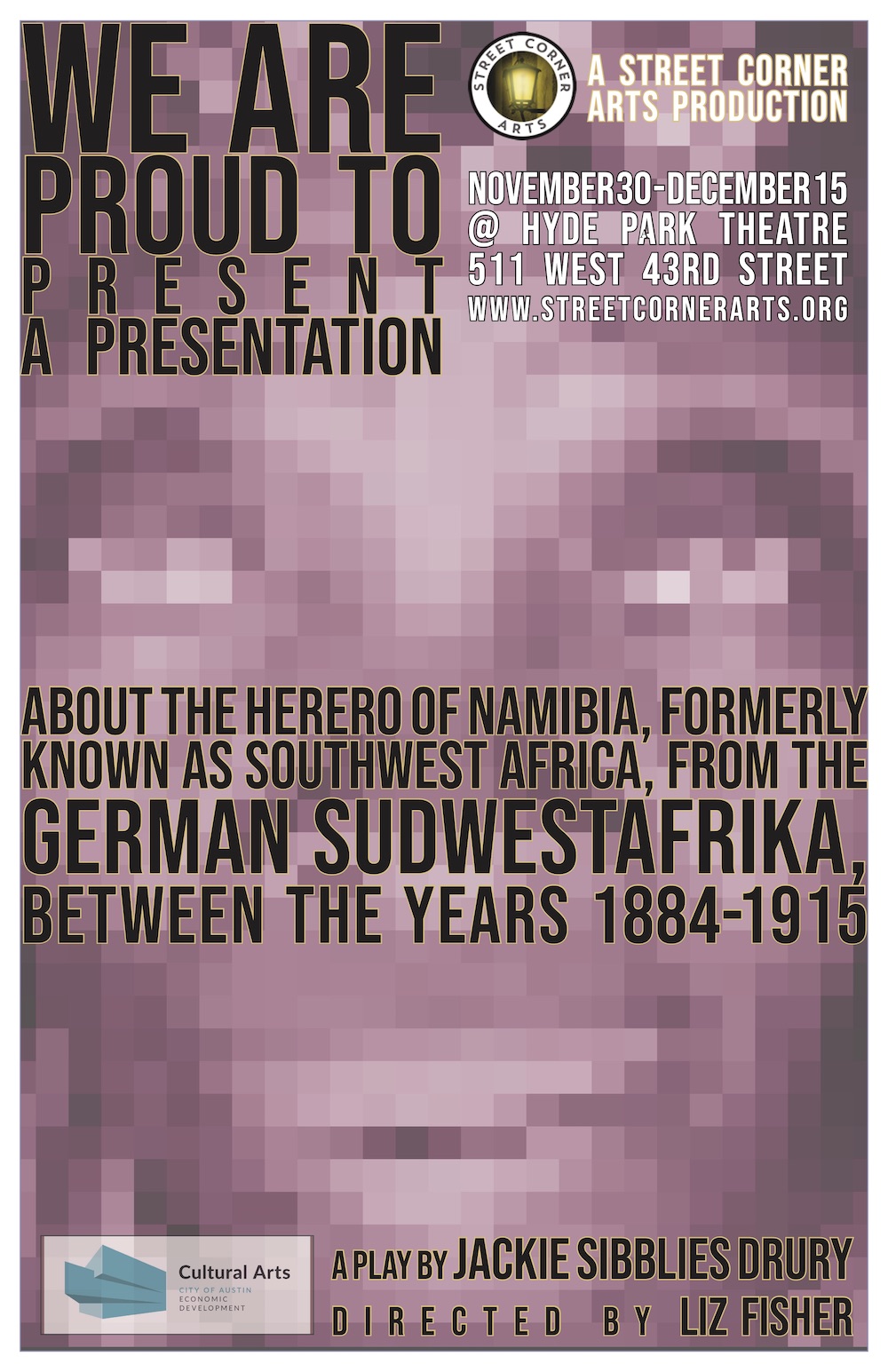