Venus in Fur
by Austin Playhouse

All he needs is the perfect leading lady-a goddess of desire-to bring his vision to life. Thomas, a talented but demanding young writer, has meticulously adapted Leopold von Sacher-Masoch’s 19th century erotic novel, Venus in Fur, into a brilliant new play, but he can’t find the right woman for the role. When Vanda, a scattered young actress, arrives several hours late to her audition, Thomas is unimpressed. However, Vanda soon wins over the unwitting director with her strange mastery of the material and her alarming insights into his deepest desires. Suddenly the simple audition becomes a titillating game of cat and mouse. Who leads in the dance between fantasy and reality, love and lust, seduction and submission? Venus in Fur is a sharp, hysterical romp through the treacherous politics of sex and power. 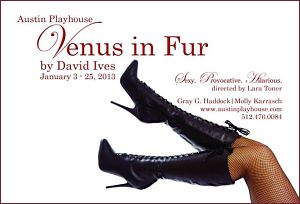