When the ghosts of their past are unleashed, the residents of an exclusive retirement community must come to terms with lost love, triumphs, fears, and the choices that haunt and connect us all. This moving new play by award-winning local playwright Cyndi Williams, reminds us that the most important moments of our lives are often the ones that defy explanation.

In 2008, Austin Playhouse produced the world premiere of another Cyndi Williams play, Dug Up, also directed by Lara Toner, which won the Austin Critics’ Table David Mark Cohen New Play Award. Other plays by Ms. Williams include A Name For a Ghost to Mutter (Harvest Festival of New American Plays, Larry L. King Award), Where Are They Now? (Austin Critics Table, Best Production of a Drama), Fish, andAmerican Arcana.  Roaring is the recipient of a ScriptWorks Finer Point award.

THURSDAYS Limited Pick-Your-Price Rush tickets will be available at the box office one hour prior to show-time for eachThursday performance. 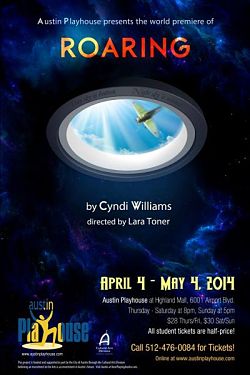