Memphis, the musical
by Woodlawn Theatre

Memphis is set in the places where rock and roll was born in the 1950s: the seedy nightclubs, radio stations and recording studios of the musically-rich Tennessee city. With an original score, it tells the fictional story of DJ Huey Calhoun, a good ole’ local boy with a passion for R&B music and Felicia Farrell, an up-and-coming black singer that he meets one fateful night on Beale Street. Despite the objections of their loved ones (Huey’s close-minded mama and Felicia’s cautious brother, a club owner), they embark on a dangerous affair. As their careers rise, the relationship is challenged by personal ambition and the pressures of an outside world unable to accept their love.

Wikipedia: Memphis is a musical by David Bryan (music and lyrics) and Joe DiPietro (lyrics and book). It is loosely based on Memphis disc jockey Dewey Phillips,[1] one of the first white DJs to play black music in the 1950s. It played on Broadway from October 19, 2009 to August 5, 2012. This production won four 2010 Tony Awards, including Best Musical.

To purchase tickets visit www.woodlawntheatre.org/tickets or call 210-267-8388. Box Office is open Tuesday - Friday 10 AM - 5 PM and an hour before showtimes. 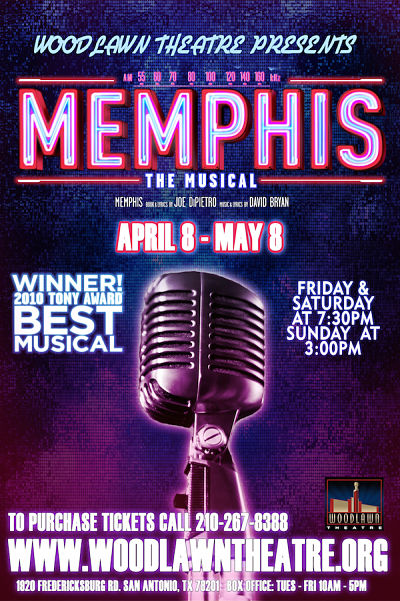