The Butcher of Baraboo
by Street Corner Arts

CTX Live Theatre Review
In Baraboo, Wisconsin, the ground is white with snow and the air is black with laughs. Valerie is the town butcher with an axe to grind. Her daughter Midge is a pharmacist whose clientele extends beyond the drug store. Over one cold February week, the town cop – who just happens to be Valerie’s sister-in-law – will try to sniff out this family’s secrets and lies.

THE BUTCHER OF BARABOO by Marisa Wegrzyn held its world premiere at the acclaimed A Red Orchid Theatre in Chicago some years ago. This December, Street Corner Arts is excited to bring this gem of a dark comedy to our home at Hyde Park Theatre in its Austin Premiere!

Ms. Wegrzyn’s work has been described as a cross between Martin McDonagh and the Coen brothers, unabashedly blending the spectres of violence and absurdist comedy with ridiculous unselfconscious characters that populate your local neighborhoods. Yep, this one’s right up Street Corner’s alley and yours.

About the Playwright: Marisa Wegrzyn has had plays produced in Chicago at Steppenwolf Theatre, A Red Orchid Theatre, Theatre Seven of Chicago, Rivendell, and Chicago Dramatists; in New York Off-Broadway at Second Stage and Kef Theatre; regionally at CenterStage Baltimore, Moxie Theatre San Diego, Victory Theatre Center Los Angeles, and Hot City Theatre St Louis. She has been commissioned by Steppenwolf (twice), Yale Repertory Theatre, and Theatre Seven. She is a founding member of Theatre Seven in Chicago and is currently writing for TV (Goliath, Amazon) while continuing her work in theater around the country.

About the Director: Carlo Lorenzo Garcia is an actor/director who previously performed with Street Corner Arts in POCATELLO and JUNK. In Chicago, he served as Producing Director for Mary-Arrchie Theatre from 2008-2016. Carlo directed the highly acclaimed RED LIGHT WINTER (4 Jeff Award Nominations & 1 Jeff Award Win), OUR BAD MAGNET (2 Jeff Award Nominations), and AMERICAN BUFFALO (1 Jeff Award Nomination), and more. Other directing credits include RICHARD III with Wayward Productions and most recently, THE CHILDREN for Jarrott Productions. | www.carlogarcia.com

“Marisa Wegrzyn's amusing black comedy is a kitchen-sink play in which the sink seems constantly on the verge of being drenched with blood. This Gothic yarn of family dysfunction in overdrive plays out as a sort of Americanized variation on Martin McDonagh's THE BEAUTY QUEEN OF LEENANE crossed with a Coen brothers sensibility.”

“Dancing all over the fine line between sitcom and grand political drama, Baraboo explores the dramatic and comedic potential of the theater without losing the key ingredient that makes live theater so compelling: The actors on stage are real people, and this could easily be real life.”

“The play will also appeal to viewers who enjoy their dramas flavored with both tension and laughs, building to a shocker finish … I was delightfully uncomfortable for most of the play and ready to look away from the stage when the violence threatened to fling some major nastiness at us. But in the final reckoning this is one of the most entertaining shows of the season.”

The Butcher of Baraboo
by Marisa Wegrzyn
Street Corner Arts 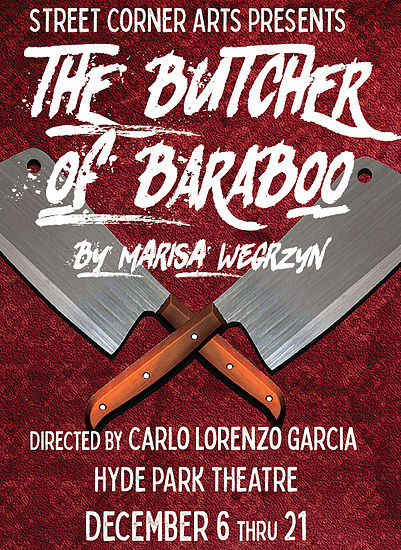