What does the word “rally” mean to you? My ideas run heavily to baseball teams who go on scoring frenzies when trailing on the scoreboard, as teammates in the dugout wear their ball caps inside out. I thought I was solid with the concept when I attended a show of the same name at the Emma S. Barrientos Mexican American Cultural Center off Rainey Street.

Four powerful, athletic dancers entered the stage one by one and offered a single gesture to each other, then started to move, developing the gesture into phrases and sequences of movement. They paused and offered new gestures and began new sequences again. It seemed as though they were creating the sequences as they proceeded. 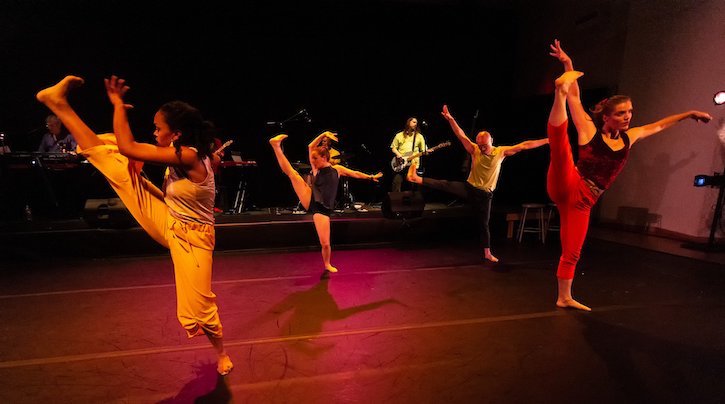 Another pause, and the lights faded up on a musical ensemble playing upstage. The dancers began moving in concert with the music, starting and stopping with invisible cues. A compact figure (Andrea Ariel) standing at a downstage corner observed the action and from time to time made sequences of small and rapid hand, body, and foot gestures. At times her movements were more compelling than those of the dancers, but, most mysteriously, she changed the progress of the performance, without the musicians and dancers seeming to notice.

Was it gimmickry? Not likely, since the artistic harmony between music and movement was exquisite. Some of the facts behind the mystery make much of it plain without removing all of its intriguing glamour. 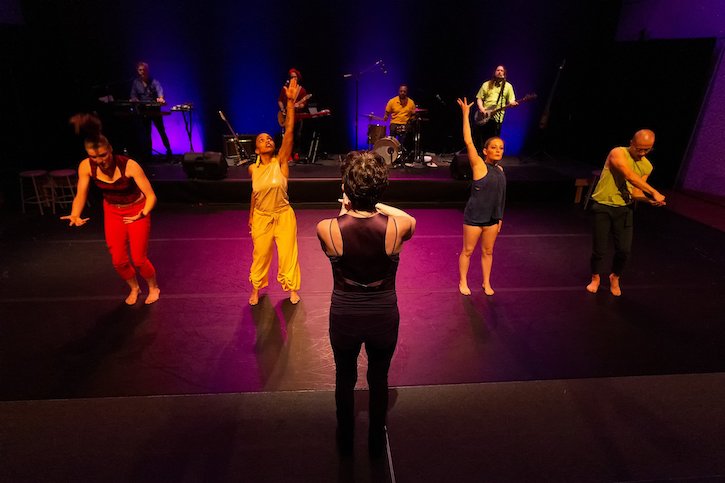 Rally is another take on the Walter Thompson performing arts innovation known as Soundpainting. At its base, the form is a series of shapes shown by a conductor to a group of performers, who then perform the observed shapes as instructions in their particular mode of performance. The instructions are performed in any artistic mode—music, dance, and acting are the commonest forms. Visual art and storytelling have also been explored in Soundpainting. The thousands of shapes currently in the repertory create a rough grammar telling who, what, when and sometimes how. For those who love puzzles, the conductor is fascinating to watch. What is she instructing them now? For those interested in music and dance, the performances are never alike, but they are all powerful. The improvisational effects of Soundpainting are very strong. 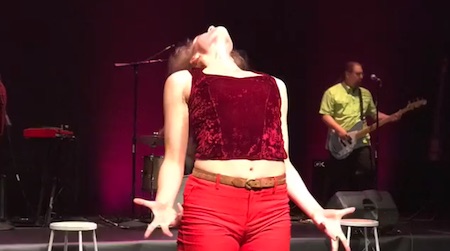 Andrea Ariel Dance Theatre has made something of a speciality out of Soundpainting, with three productions of The Bowie Project in recent years. Locked-in in 2018 was also a Soundpainting, and the company put on at least two other Soundpainting productions in the late 90s. Rally was a departure from the structures of previous shows. Dance and music were the great emphasis, opening with improvisational but well rehearsed dance, and the highly skilled combination of dance and music improvisation. Andrea Ariel took on all the conducting responsibilities in Rally; she did not share them with other Soundpainting adepts as she had in The Bowie Projects.

Setting it all off as a surprise was a spoken-word section, with the dancers walking to a microphone, speaking of what they wanted to see in the world today, and explaining why they were willing to rally to pursue those ideals. That said it all for me. The final touch was the spoken word section being given in three languages, English (Rebecca McLindon and Cicely Fullylove), Mandarin (Jun Shen (Sunny)), and French (Sandie Donzica). The world needs to come together as a whole to address its problems. That requires a vast, multipurpose solution, one monumentally hard to approach. At the end of the performance, Ariel led the audience in a brief Soundpainting phrase she taught us before the lights faded up. The fourth wall melted, and the community became one.

Rally was developed over a long period with open community workshops, and material for the stage was gained from them. Musical composition by Andrew Nolte drew on material from the workshops. Nolte performed all songs live under Ariel’s conducting, with first-rank musicians Claude McCan, Garry Franklin, and Jason DeCuir. The conversion of movement and music  into material for Soundpainting was an immensely generous community approach to performing art. Other performance companies who talk about community involvement have much to learn from Andrea Ariel Dance Theatre. Ultimately she teaches us that what we do here in community, rallying, can influence the world.

As in most dance productions, the show ran for only one weekend. Thus it has ended before this report can be posted.  Track media to follow Andrea Ariel Dance Theatre.