Andrea Ariel Dance Theatre (AADT) will proudly present the live premiere of REIMAGINE: Celebrating 30 Years in the The Long Center - Rollins Theatre. In celebration of its 30th Anniversary, AADT’s critically-acclaimed Founding Artistic and Producing Director Andrea Ariel reunites with long-time collaborator and composer Graham Reynolds for an evening of dance and live music that fuses past repertoire with new work.

During REIMAGINE, audiences will experience the dynamic expanse of Ariel’s more than 32 years of choreography that "manifests a personae of poignant stillness, razor-edged frenzy, flowing grace, and of downright absurdity in expressing the dimensions of humanness,”(Austin Chronicle).  The celebratory performance brings together acclaimed works from past repertoire with new works that are all choreographed to scores for piano and strings composed and performed by Graham Reynolds with Alexis Buffum on violin and Ilia De la Rosa on cello. REIMAGINE will be performed by the AADT’s ensemble members Luis Ordaz Gutierrez, Sade Jones, Clay Moore, Whitney O’Baugh, Ceci Proeger and Jun (Sunny) Shen.

Called “Evocative & enigmatic" (The Seattle Times) and his music “Beautiful and raucous...” (Vogue Magazine), Graham Reynolds began working with AADT in 1999 and over the span of 14 years, he has collaborated on 12 productions. The music for REIMAGINE includes pieces from Reynolds’ albums The Difference Engine: A Triple Concert, a collaboration with Tosca String Quartet and an early piece from Golden Arm Trio’s Tick-Tock Club. New works have been created to music originally composed by Reynolds for AADT’s shows Five Two Ten (2008) and The Geometry of Proximity (2011).

“Over all these years we were both developing our own work, and there are many threads of Graham’s compositions that had been part of my work during that time,” said Andrea Ariel. “I thought it would be interesting to reimagine older works while creating new ones to a selection of scores that resonated with these connections.”

Andrea Ariel is the Artistic and Producing Director of Andrea Ariel Dance Theatre, based in Austin, TX where she produces, choreographs, and performs works that are created in collaboration with artists working in dance, music, theater, poetry, film, media and visual art. Ariel has created over 50 original works since first forming the company in 1990.  Recent productions include “Rally” and “Locked-In” following the highly-acclaimed “The Bowie Project”. Her work has been presented in Texas, California, Illinois, Arizona, New Mexico, Washington, and New York and she has been a recipient of numerous project support grants and commissions including 30 years as a Cultural Arts contractor with the City of Austin. Honors for her work include special citations from the Austin Critics Table, The Sound and Vision Award (2017), for accomplishments in the realm of dance and a commitment to visionary cross-discipline work, and the Site for Sore Eyes and Ears Award (2016) for invigorating collaborations of dance and music in site-specific performance.

She is a member of the 2019 Creative Ambassadors Program, ten artists and art groups selected by the City of Austin to promote multidisciplinary art forms internationally to enhance Austin’s global profile as center of creativity, and facilitate dialogue between other regional, national and international arts agencies and their communities. Andrea Ariel Dance Theatre is a recipient of the City of Austin’s Artist Access Program for 2022 and is in residence this season at The George Washington Carver Museum and Cultural Center.

General admission $29 plus fee; discounted rate $19 plus fee for seniors, physically disabled, others, plus fee.

Click HERE to go to the Long Center for tickets to REIMAGINE. 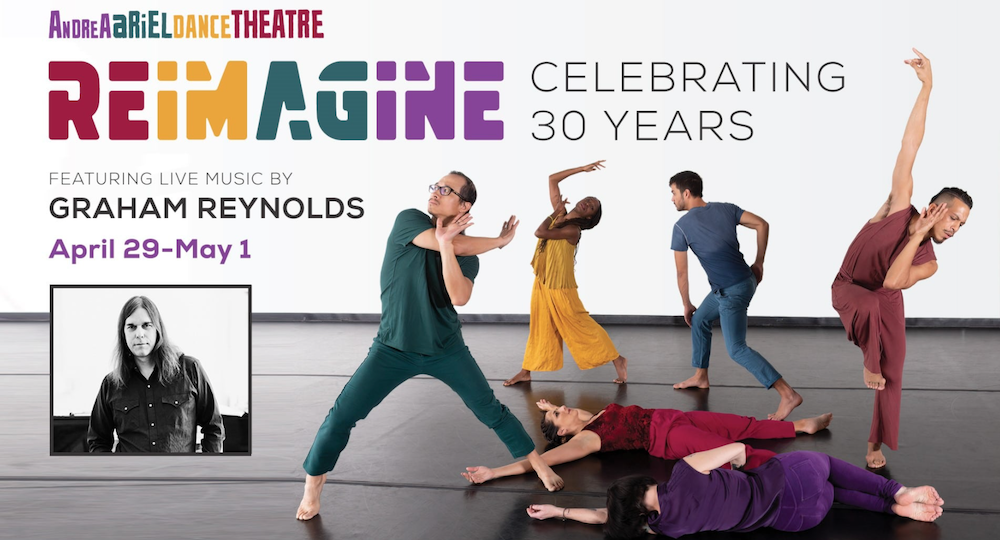