Review: Meetings of the Mind by Chaddick Dance Theater
by David Glen Robinson

Meetings of the Mind took place in and on the south facing surfaces of Austin City Hall. Dancers performed on the plaza in front of the main entrance, the balcony, the amphitheatre terraces, and in the landscaping all around. City Hall is the heart of Austin civic property, and because of this the performance with Chaddick’s skilled dancers was a gift to the city and the citizens of Austin. The City awards grants to many of the city’s arts organizations, including Chaddick Dance Theater, and this expression of gratitude was highly appropriate. 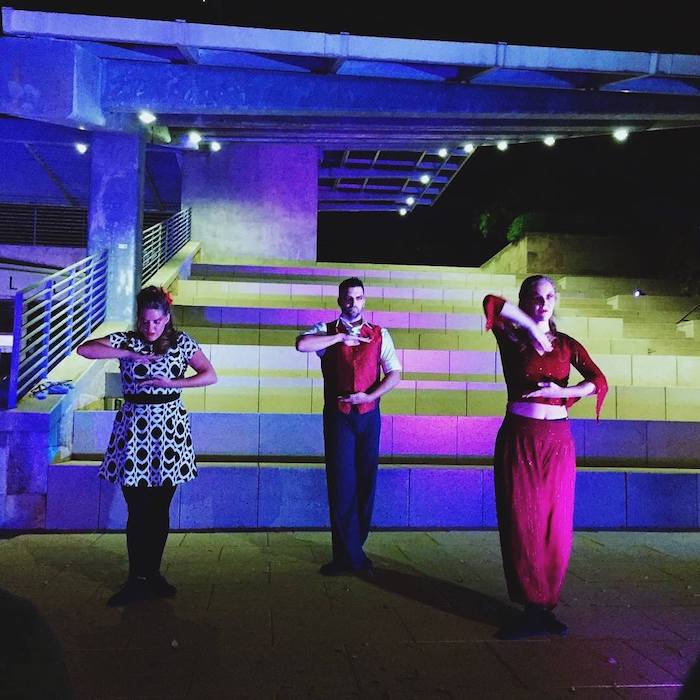 Choreographer Cheryl Chaddick explores modern dance technique to gain artistic expression, in this case the struggle to find interior peace against the clamor of the mind’s other concerns and obsessions, or as she listed them in her program notes—desire, playfulness, self importance, hope, confusion, anger, restlessness, excitement, silliness, apathy, and falsehood. Her dancers conveyed these struggles and concerns in the abstract movement made famous by modern dance.

The dancers’ struggles succeeded for the most part. As in every fine arts performance, the impressions taken away sometimes amounted to tangents from the intentions of the producers. Most satisfying was the “human carillon” dance. The dancers were dispersed sitting on the terraces of the amphitheatre, the audience looking up from below. The dancers’ arms and legs were held wide to evoke the shapes of bells in profile. The dancers performed slight rocking movements to bell-like chords on the soundtrack by Andrew Bayer. This conveyed a brief but memorable impression.

Throughout the program, the dancers rushed at high speed to the widely dispersed points of the playing space in order to exploit every available performance surface, creating significant surprises. It all seemed to lead up to a full-company finale on the expansive plaza in front of the south doors of City Hall, and the finale did seem to provide the best performances and movement of the evening. 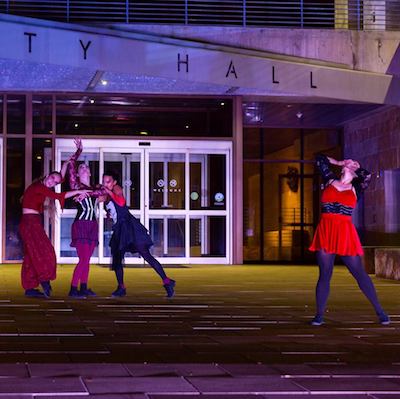 always with site-specific or site dance, the production suffers unusual challenges to make a successful show in spaces not geared for such. Meetings of the Mind was no exception to this, but its struggles at least gained completion of the show. The two solos in the landscaping, essentially in what would be stage wings, by Devon Adams and Christine Wong, played out effectively without lighting on them. The sound design and its levels were generally good. Sight lines were poor, even when one eschewed sitting and stood and moved to favorable vantage for different pieces. Most, perhaps all of the audience saw only the calves of the legs of Cameron Oefinger when he performed part of his solo at the top of the amphitheatre, the rest of him sight-blocked by the ceiling of the amphitheatre.

A few years ago Chaddick Dance Theater performed a highly regarded show in the Austin Ballet Theatre—literally in all the spaces of the building. That show was breathtaking for envisioning the possibilities for performance in all the balconies, walkways, closets, and meeting rooms of a multilevel building. After one night’s showing of Meetings of the Mind, Cheryl Chaddick said she wanted “to try new things,” go in new directions. It may be that the new direction best pursued may be that of going within—as suggested in the program notes—and bringing forward the subtleties and nuanced lessons learned in previously explored territory.

Chaddick Dance Theater mounts a dance show of all-new material about every six months. They invite in guest artists to perform with them, thus giving audiences a sampler of artists in the modern/contemporary dance community.  The company is well worth following.

Meetings of the Mind
by Cheryl Chaddick
Chaddick Dance Theater 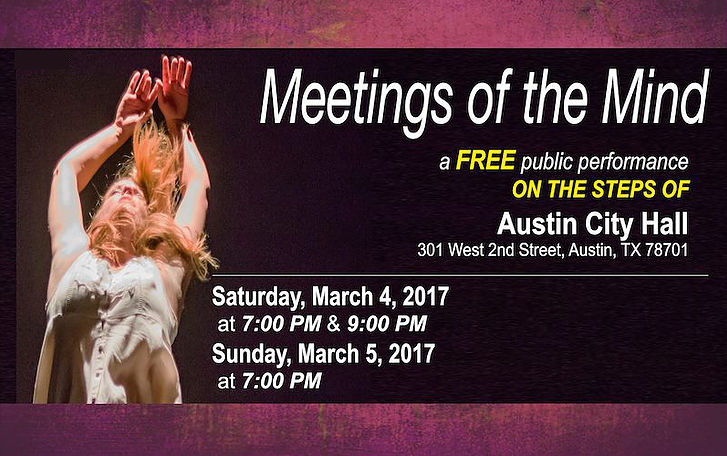