Aladdin speaks only English and Princess Jasmine only Spanish in Aladdin: the Spectacular Dual Language Musical, now playing at San Antonio’s Roxie Theatre. The language barrier between them is the work of the villainous vizier Jafar, who will do anything to make Jasmine his wife.

When street urchin Aladdin meets the beautiful princess, their mutual attraction is immediate, but he is arrested and thrown into prison by Jafar’s henchmen. He finds a lamp, rubs it, and brings forth a genie who grants him three wishes. Naturally, Aladdin wishes to be immediately set free and transformed into a prince so that he can gain access to the palace and win Jasmine’s heart, but there are more challenges to be faced.

This dual-language version is adapted from the original Aladdin Jr., and is even further abbreviated to allow actual children to perform in a sensible running time. It’s a good call. The Roxie Theatre’s 360-degree experience is also effective. It literally surrounds the audience, and you can hear the performers’ voices all around you as they move around the set.

This unorthodox arrangement makes the piece feel more like Aladdin in Concert as it’s impossible to build large, elaborate sets with this arrangement. Rather, it’s up to the actors to provide the atmosphere — and they deliver.

Aiden Castillo is a charismatic Aladdin, who displays a nice chemistry with Jasmine, portrayed by Jaeden Riley Juarez. Jay Salazar registers well as the imperious Sultan, and Dwight D. Robinson brings manic energy to the role of the Genie.

As Jafar, the statuesque Joseph Urick is a true Disney villain come to life, and he inhabits the role with fiendish glee. Jessie Reeves (as Jafar’s parrot sidekick, Iago) and Baker Kyle (as Aladdin’s faithful monkey, Abu) both display amusing precociousness. As the enchanted storyteller, Gina Elyse Morando provides helpful narration and interpretation.

The bilingual approach gives the production a warm feeling of inclusiveness. Directed and choreographed by Jonathan Pennington, it’s also an ideal entertainment for kids, especially with so many youngsters in the cast. 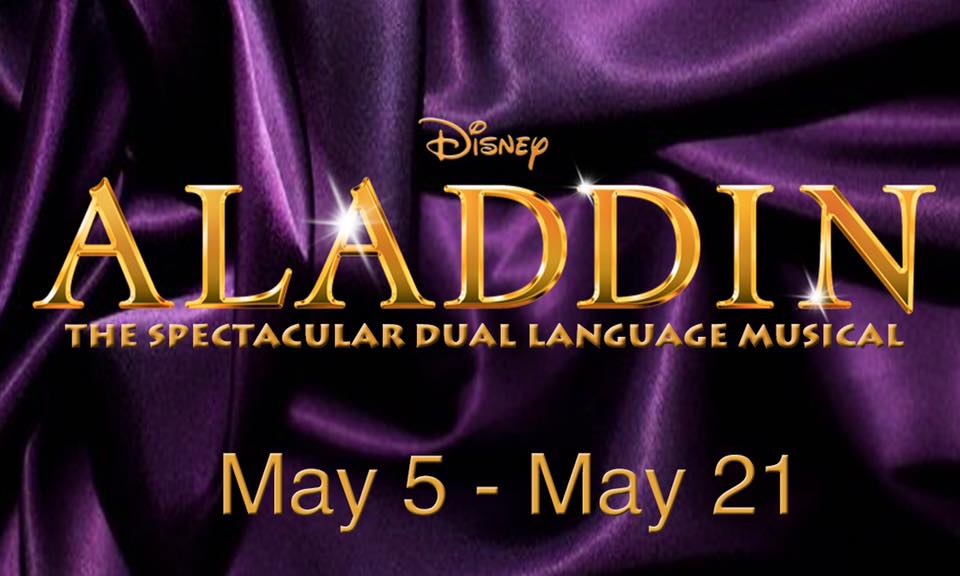