Review: The Mousetrap by Austin Playhouse
by Michael Meigs

Theatre journalism has a half-life of perhaps two weeks, a fact that prompts me to strive to see a production as soon as possible. After all, a theatre review published only 48 hours before closing has not much more than archival interest.

One would prefer to deliver the report and comments hot off the first-night griddle, particularly when the show's an interesting or engaging one. Perhaps, just perhaps, the review might contribute to increasing the turnout for deserving productions.

Unfortunately, I didn't get to The Mousetrap until its final weekend, due to family visits, a surging December theatre season, and my own return to the boards in mid-December.

We're subscribers and modest contributors to the Austin Playhouse, in part because it's the first theatre we discovered in Austin after relocating here in 2007. I have an affection and respect for Don Toner and the Playhouse's company of about two dozen actors. Now mid-way through their tenth season behind the Penn Field water tower at 3601 South Congress, they have increased their core season to five plays and they operate an intriguing side space, the Larry L. King Theatre.

The main stage offers well-made, familiar plays, a sort of hearty middlebrow fare that corresponds to the visibly middle class and generally middle aged clientele. It's not as down market as Luby's or Furr's -- it's closer to an in-house restaurant at the Sheraton or Hilton. The rest of the current season includes Misalliance ("Shaw’s delightful comedy of manners takes on the mating game in turn-of-the-century England"), Steve Martin's comedy Picasso at the Lapin Agile (ALT reviewed a production last February at the Sam Bass Community Theatre), and the dependably moving Jacques Brel is Alive and Well and Living in Paris, with the assistance of Austin's polymusicalist Michael McKelvey.

During last year's FronteraFest Long Fringe, a couple of young writers imagined by David Meyers and Patrick Kniseley in their oddball, whimsical play Drywall were striving to come up with plots. Rotund Matthew Butterfield and lanky Phillip Kreyche mercilessly shot down one another's ideas. One throw-away line was, approximately, "Are you kidding? That's something that they would produce at the Austin Playhouse!"

My son attended The Mousetrap with us on the final Saturday of the run. He was pleased to recognize company members Molly Karrash, Benjamin Summers and Michael Stuart, all of whom had amused us last Christmas with the theatrical radio-play version of It's A Wonderful Life, as well as David Gallagher who was in the Larry L. King theatre shortly afterwards in The Last Five Years. 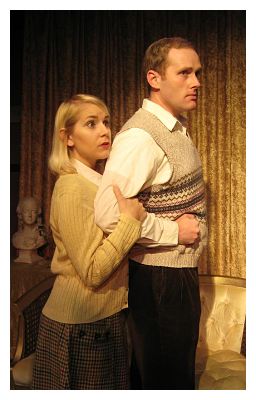 Agatha Christie's The Mousetrap opened in London's West End in 1952 and has played continuously since then -- more than 24,000 performances. No film version exists, because the contract terms specify that none may be made until six months after the West End show closes.

The show possesses the same appealing plot elements as Christie's many whodunnits, so familiar as to have engendered the board game Clue, published in the UK just about the time Christie was writing the short story that became this play. An English country manor, in this case newly transformed into a guest house by an appealing young couple; an assortment of eccentrics and mysterious characters; a murder reported in far-off London and another that occurs in the house; isolation reinforced by an unexpected snowstorm; a back story of crime and child neglect that appears somehow related to one or several of those staying at the house; a wily foreigner (in this case, Italian), a gruff retired British military officer and a detective -- in this case, an investigator so zealous that he arrives through the blizzard on skis.

Misdirection, mutual suspicion, fantastical talk, the sober bourgeois confronted by the reality of violent death, and a puzzle to figure out. Dame Agatha wrote the story with a twist and surprise ending. By tradition, British audiences are solemnly admonished not to reveal the outcome, so as to avoid spoiling the piece for future audiences. The Austin Playhouse doesn't preach against "spoilers" either in the program or in Don Toner's opening greeting, but the play is sufficiently obscure for most U.S. audiences to keep them puzzling right along with the Ralston couple and Detective Sergeant Trotter (the dogged and articulate Brian Coughlin).

We rather enjoy being shut up with these folk out in their imaginary snowbound isolation. 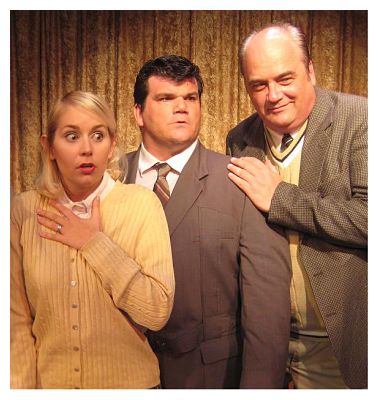 Molly Karrach and Benjamin Summers are the endearingly hopeful novice innkeepers Molly and Giles Ralston, and we do hope that their new marriage will not be torn apart by unrevealed secrets. Their assorted guests inflame our suspicions and we could easily imagine any of them doing in Colonel Mustard in the dining room with the candlestick: Marijane Vandivier as the haughty, hateful matron objecting to her accommodations; Aaron Clay as the strange little Italian Mr. Paravicini, who says that he's seeking refuge because his motorcar has gone into a ditch; Laura Walberg as the intensely private Miss Casewell; and Michael Stuart, who fits into the personage of the distracted Major (ret.) Metcalf as if it were a comfortable tweed suit.

The treat of this production is David Gallagher as the young perhaps-architect Christopher Wren, allegedly given the name by parents who desired the same design success for him. Gallagher is a walking nervous breakdown, a continuously recaptured cloud of italic exclamation points (!!!!!), parentheses and blurted thoughts. His is a fine performance, one of those that sets zinging the cords of this apparently predictable plot. He and director Toner moderate that energy judiciously, assuring that it serves the story rather than running away with the show. Gallagher is compulsively watchable in The Mousetrap and is my favorite for recognition as featured actor.

Click to view program of The Mousetrap at Austin Playhouse 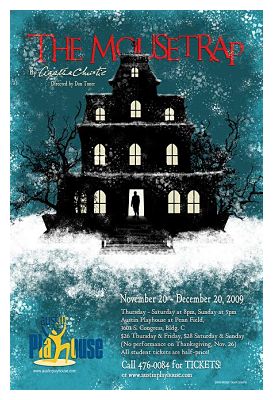