Review: The Interior Landscape of the Emotional Mind by Chaddick Dance Theater
by David Glen Robinson

It was a cold night in Austin, made worse by the biting wind that swirled around its towers and roared down its streets.  Inside Ballet Austin studios, Cheryl Chaddick and company lay in wait for their audiences with a well-prepared dance show that eventually took us to the forefront of Austin and regional contemporary dance.

The Interior Landscape of the Emotional Mind was presented as a site-specific dance, or site dance.  How fitting that an appropriate environment for the performance is within the offices and rehearsal studios of an award-winning dance company, Ballet Austin.  Perhaps this setting turned the corner on the site-specific concept -- with or without tongue in cheek, I don’t know.

Production in unconventional spaces presents exceptional challenges, but the audience got the metaphor from the beginning.  The Chaddick company performed the dances of this integrated show in the hallways, balconies, rehearsal studios and alcoves of Ballet Austin, shifting the setting metaphorically into a many-chambered mind to show us facets of that often perplexing house within us all.  We saw six such meditations on the house.

It all worked because choreographer Chaddick remained true to the basics of choreography and theatrical production.  She crafted dances with attention to shape, gesture, rhythmic steps, floor patterning and overall structure. All the separate performances here were well lit, with clearly audible soundtracks and sightlines. Do these production elements seem too trivial to mention? I assure you thatother  recent site-specific performances in Austin have shown very little consideration for these basics.  They're anything but trivial.

Usher-guides led us to the spacious foyer and directed our attention to the second story balcony for Going In. Two plain white masks wrapped in red robes rose up and peered down at us through the railing. They perched at the head of the stairs, silent, impersonal and persistently ominous, their trailing red robes giving them monstrous size.  Obviously, they had missed the bus when Where the Wild Things Are left town and had pawned their horns and earrings in order to eat.  Soloist Katie Mae Hebert, unmasked and clad in black, danced gymnastically on, around and through the balcony railing.  Her dance established a great contrast to the forbidding forms nearby; she ended it with her feet protruding through the railing bars, slowly relaxing to stillness.  I wasn’t quite sure of the intended takeaway of this piece, and I wondered why such a powerful blast of fantastic imagery exploded on us at the beginning of the evening.  But I was definitely along for the ride.

Four Calls may have been even more spectacular.  It took place in the glassed-in balcony/corridor above the Armstrong Connelly Studio as we watched from below.  Four performers spaced at regular intervals along the corridor danced in place facing the studio.  They wore variously patterned flowing fabrics and two plain masks each, one on the face and one on the top of the head.  They began by moving slowly to John Michael Hunt’s abstract, non-melodic soundtrack.  Their pacing increased only slightly through the piece, but they manipulated their fabric costumes into increasingly non-human grotesque forms.  They presented the head mask to advantage to suggest animal or magical forms.  Eventually, the performers seemed to melt or dissolve below the line of our view or otherwise crawl away.  Odd as this description may sound, the grotesquerie was superb.

Sourcing took place on the floor of the Adlerland Studio. Three human forms lay under translucent, textured fabrics that completely covered the studio floor. The human forms suggested sand dunes in a vast desert. These shapes gradually came to life and performed a trio, employing the fabrics in the choreography. They waved the fabrics and threw them upward to suggest clouds, changing the dominant imagery from earth to air. They finished upright, forms in fabric resembling some massive figurative sculpture of human shapes not fully released from the stone.

In or Out changed the pace and evoked 21st century downtown life. The piece took place on the City View Porch, with the audience observing through the windows of the lounge immediately inside the building.  Three hard-body dancers -- Nathan Brumbaugh, Cameron Oefinger and Erica Stivison -- started in poses on the porch railings, staring outward on the literal nightlife of Austin below them.  They then gave the audience an almost exhaustive survey of the discontents of young condo-dwellers.  They showed every combination of youthful interaction in perfected modern technique—piled in threes to suggest sex, piled in twos to suggest sex, separating by twos and threes to suggest failed relationships, shaped in stillness on the railings to suggest despair—and they went on a while with it.  Here was an interior landscape of chaotic events and emotional tumblings.  Through it all, Chris Donahue provided live accompaniment on piano in the lounge.

In Get Closer, Lindsey Taylor and Stanley Roy Williamson began their performance behind a window concealed by blinds.  When the blinds were raised to reveal them, they sat two heads emerging from one shirt, Siamese twins who bore no resemblance to each other.  There followed their own catalog of emotional states and relationships, all of them hilarious.  The piece was comic relief at its best.

For Holding, danced by Maia McCoy, we were led into the second story Shiflet Studio. The studio has an odd alcove to one side, interior architecture without ornamentation, only three blank walls and a ceiling with no utility closets or doors leading off it. The thing is three-quarters of a box attached to a rehearsal studio. That is where McCoy performed her powerful, athletic and very sensitive dance. To refer to our overarching metaphor, the alcove seemed clearly to be that little box in the mind where we get stuck, the one outside of which we are implored to think but cannot. McCoy danced the agony of being stuck in that box and being held back. She clung like glue to every surface (including the ceiling), searching for an exit but not finding it. The difficulties of the dance were as nothing, because every member of the audience was with her in the box, struggling to help, and absorbed in our own struggles and limitations. And then McCoy danced out of the box onto the studio floor before returning to the box and finishing the performance. What was going on there? By breaking the dynamic and premises of the dance, Chaddick offered us a kernel of insight: so what if we do think outside the box, bust loose, and enter a brave new world?  We risk finding much to fear there and may, all too often, choose to return to the corrosive confines of our box. Success may be dangerous and fearful; failure may be safe and comforting. Before we ambled too far down that pathway, our usher-guide Erin Delperdang sounded her bowl gong and led us to the next dance.

Behind the Curtain was the longish show finale, performed on the floor of the Armstrong Connelly Studio by the assembled company.  The studio was set sparely, with two rows of seating on the mirror side facing the exterior windows.  Ballet barres were grouped to one side, out of the way, next to the row of shelves. In the far corner heavy stage curtains were piled on the shelves.  Here was a typical dance studio on its day off, waiting for the magic.  The set was projected images of watercolor abstracts by Naomi Schlinke, colorful and somehow comforting.

The finale dance began slowly and with great discipline.  The performers walked on stage by ones and twos, all without masks, acknowledging each other in brief passages.  Performers gave gestures and signature steps from their earlier pieces, suggesting that here was a composite summary of the entire show. Then by some invisible cueing (no lame coughs or lamer hand claps here) the ensemble gradually began a formal step. The step was on fours and had a catch-step or kick-step on one and four. Also, the dancer could turn a right angle on four, sometimes one. With this step, the group formed a rectilinear floor pattern all over the studio floor. As the pace increased with the music, the dancers turned more frequently, making the pattern smaller and more detailed. The dancers might have also made their turns optionally on two, but I could not determine this in the event. If the pattern had persisted visually and been viewed in plan from above, it would have appeared as a maze, becoming more intricate and detailed as the dance progressed.

Once this imaginary maze map was fully described, the company broke into a series of solos and combinations, danced at points on the maze until the end of the dance. Apparently in relief of all this seriousness, one dancer proceeded well down stage and for two or three minutes made outrageous comedy faces at the audience. He did this while the rest of the company was engaging in lifts, unison passages, leaps, kicks and other sweat-making tropes of modern dance. These extended phrases and passages created a climax of considerable intensity. Music dropped the pace and slowly brought the dance to its end. The dancers exited as they had entered, by ones and twos. The floor emptied, and from the far corner a monstrous, red-robed mask rose from beneath the pile of curtains to survey the vanishing maze, the space and the audience. The red-wrapped masks from the first piece were phantasmagorical bookends!

Cheryl Chaddick’s bio declares her a graduate of SMU at a time when the dance faculty featured dancers trained by Martha Graham. Chaddick cites fifteen years of studying and teaching Graham technique, twelve years of Limón as well. This background proves her validly an artistic grandchild of Martha, who almost defined Modernism in the fine arts, with its concerns for identity, others and society. Chaddick proves Modernism still to be a field of creative richness. She has skills to teach the dance and theatre communities, particularly in applying the use of the ancient device of masks and the close attention to production values.

The Interior Landscape of the Emotional Mind runs through March 3 at Austin Ventures Studio.

Review by Jonelle Seitz for the Austin Chronicle, February 28 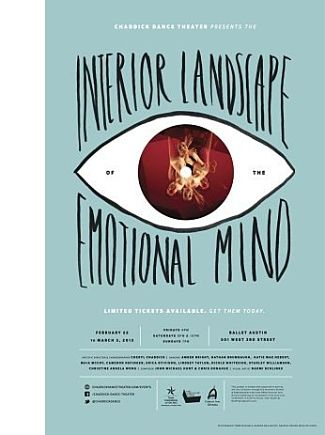