English playwright Michael Frayn climbed down the deep, dark cold well of history in this blistering examination of the wartime visit of German physicist Werner Heisenberg to his mentor Niels Bohr, trapped in German-occupied Denmark. Bohr, a Jew, had been playfully hailed by his students and colleagues as the "pope" of quantum mechanics. It's September, 1941; Heisenberg is working both for the University of Leipzig and for the German government. 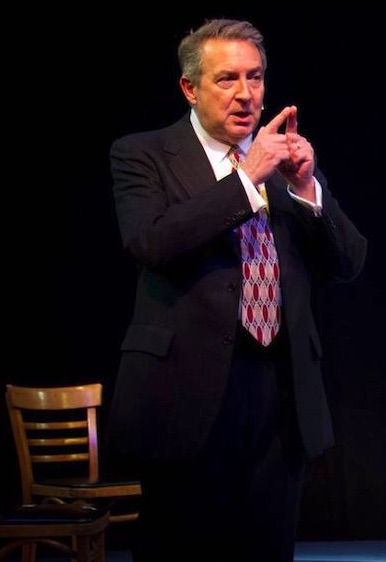 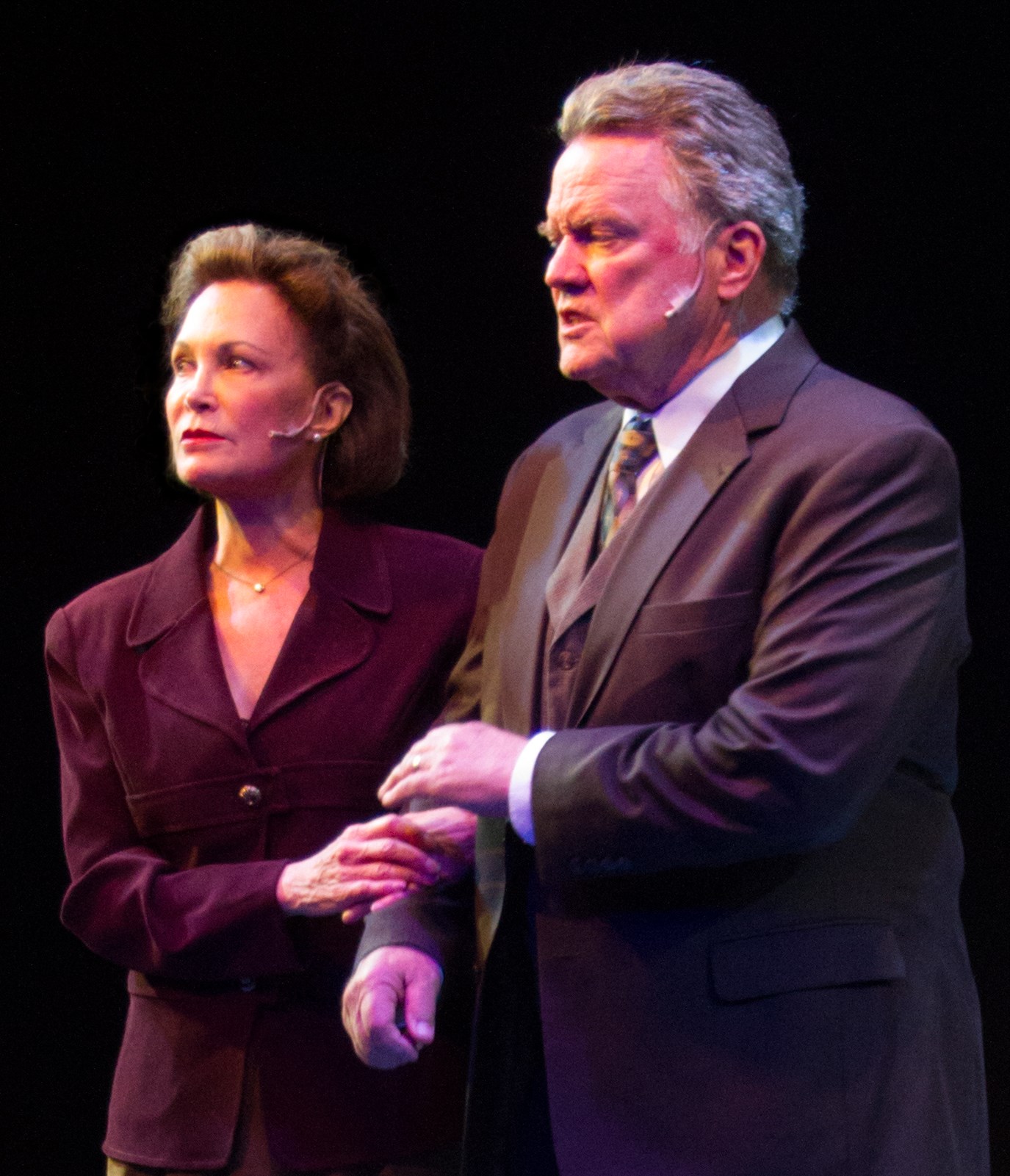 No one alive today knows what the two discussed or how much of it involved Margrethe, Bohr's wife. That is the starting point for these meditations. David Stahl as Heisenberg avows to the audience that they're all long dead. Ev Lunning, Jr., and Babs George as the Bohr couple fret and worry about Heisenberg's motivation in traveling to Copenhagen, where the German Cultural Institute is sponsoring him. A luncheon has been held in his honor; Bohr attended but remained distant and unenthusiastic. But now the former pupil, assistant and protégé intends to call on his former master. Mental alarm bells are ringing, and they continue intermittently throughout the piece as Frayn the playwright tries to depict what might have happened in the encounter. Each sequence of scenes goes awry, and Frayn has his captive characters start again.

This is a brillliant, brilliantly pedagogic and ethically speculative script. You will learn a lot about these individuals and about the scientific history of the first half of the twentieth century. Frayn's erudition passes easily through his characters' mouths -- whenever one of the physicists is tempted to fly off into mathematics, the other admonishes, "In words, in simple words!" Quantum physics, Shrödiger's cat, Heisenberg's uncertainty principle, a gorgeously simple explanation of nuclear fission, agonized contemplation of the destructive possibiilities   and the costs of elaborating nuclear weapons. . . both incipiently, in 1941, and post-war, when Heisenberg was shunned in the West by the very scientists who made it possible for the Allies to obliterate Hiroshima and Nagasaki.

A word of warning: this burning material is presented in a facility where modifications by hosting Austin Community College have turned the the theatre into an icebox. Austin Playhouse has no control over the HVAC and is obliged to warn their patrons to dress extremely warmly. The rushing air of the air conditioning caused director Don Toner to decide to put body mics on the performers, a highly unusual tactic for these pros, working in a 175-seat house. Half of those in the front row disappeared at the intermission, whether because the air was too chill or the intellectual content was too rich for them. 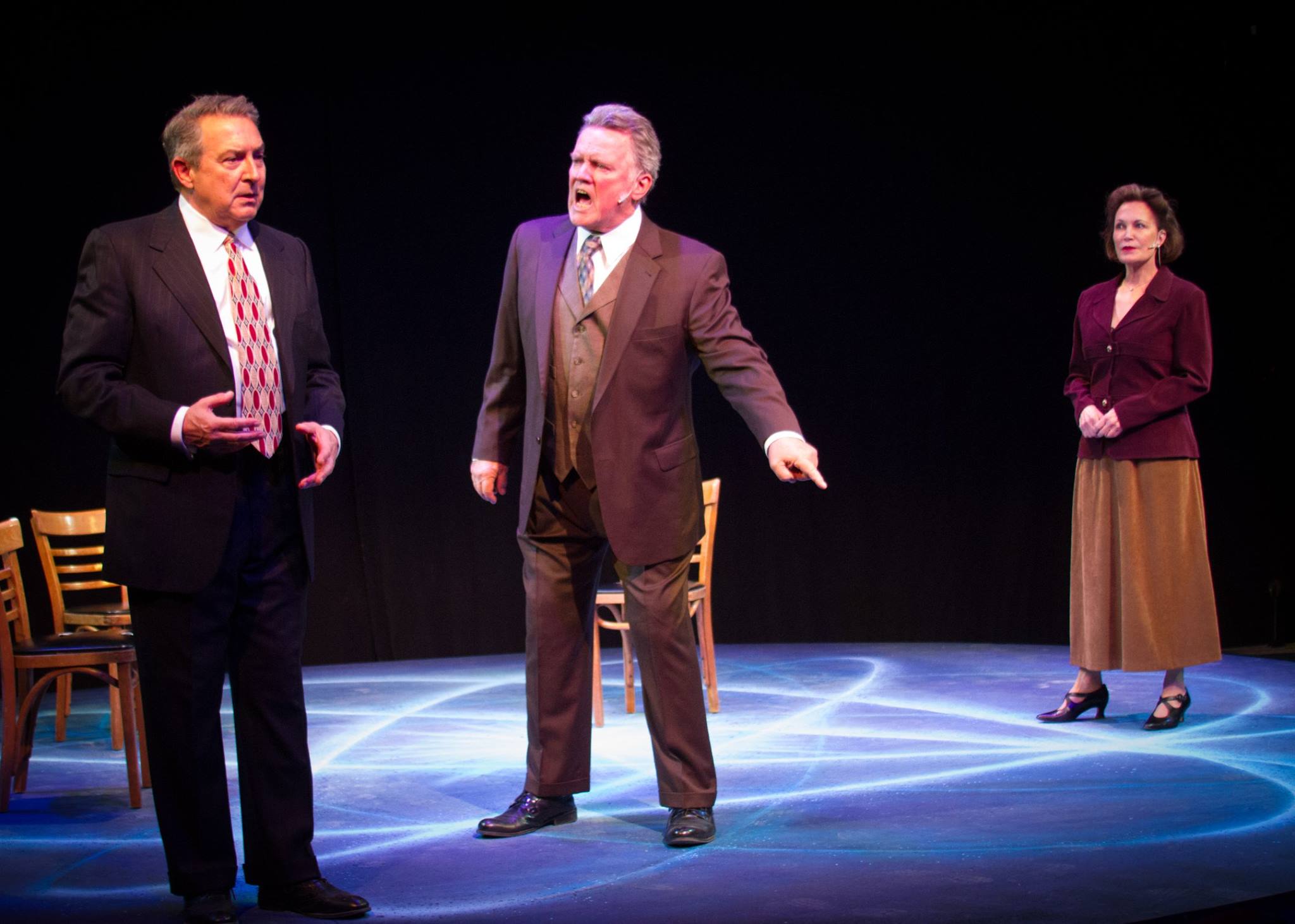 The situation resembled somewhat the notrious season in the circus tent at the Mueller Development, and made that much more welcome the news that Austin Playhouse has acquired land on East Anderson Lane so they can construct and control their own theatres.

The Playhouse performed this 2000 work by Frayn in its third season of operations -- 17 years ago -- with Stahl and Lunning in the same roles. Mary Agen Cox, doyenne of Austin stages, is replaced in this productionby Babs George, whose talent, determination and ubiquity have promoted her pretty much to the same titular respect. I've watched these three in various permutations over the past decade and more, and nowhere has their breadth and intelligence been better placed on display. 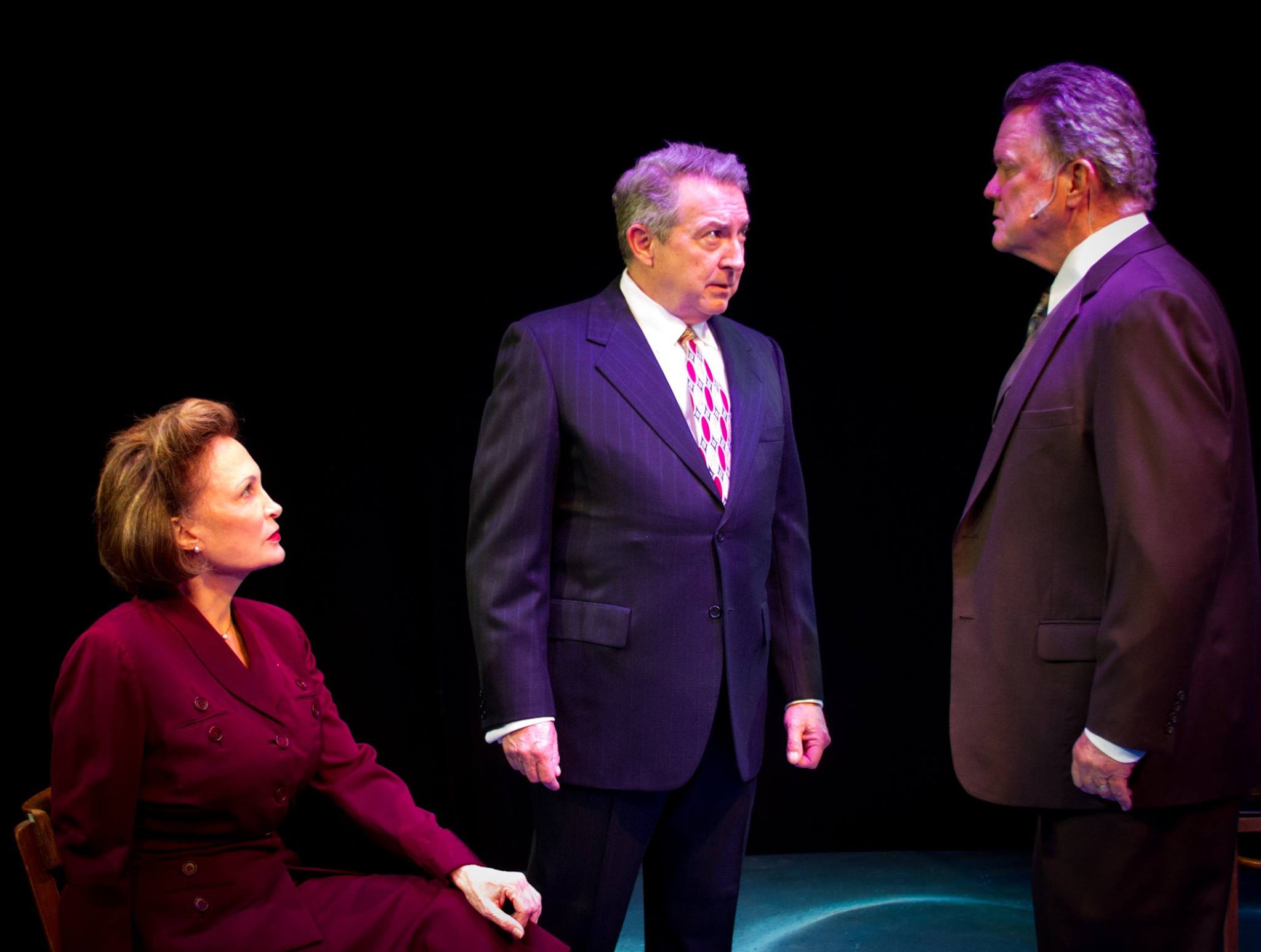 The set concept, design, and constrution are those of Mike Toner is listed for set construction. A broad, low circular platform covers most of the stage. The conventional symbol for nuclear power, a nucleus with elliptical orbits for particles, is chalked onto that surface. Otherwise, except for the trio of actors and three graceful Danish modern chairs in fawn-colored wood, the playing space is bare. No drapes, no curtain; one's gaze probes the usually unseen sides and overhead grid. This seems appropriate, given the vast empty spaces within the atom, and the vast empty spaces that haunt Frayn's version of these events.

The program is curiously lacking in background on the individuals and events that Frayn's script is exploring. I discovered belatedly, returning at intermission from the restroom, that there is a display of biographic info and chronologies set up in the side room to the left of the reception area. I didn't feel particularly shortchanged or ill-prepared for the vividly gripping encounters of Copenhagen, but if you'd like a bit more grounding to help you deal with the relentless flow of ideas and history, perhaps a few minutes ahead of time for contemplating the dramaturgy might help you get oriented.

Click to view the Austin Playhouse program for Copenhagen 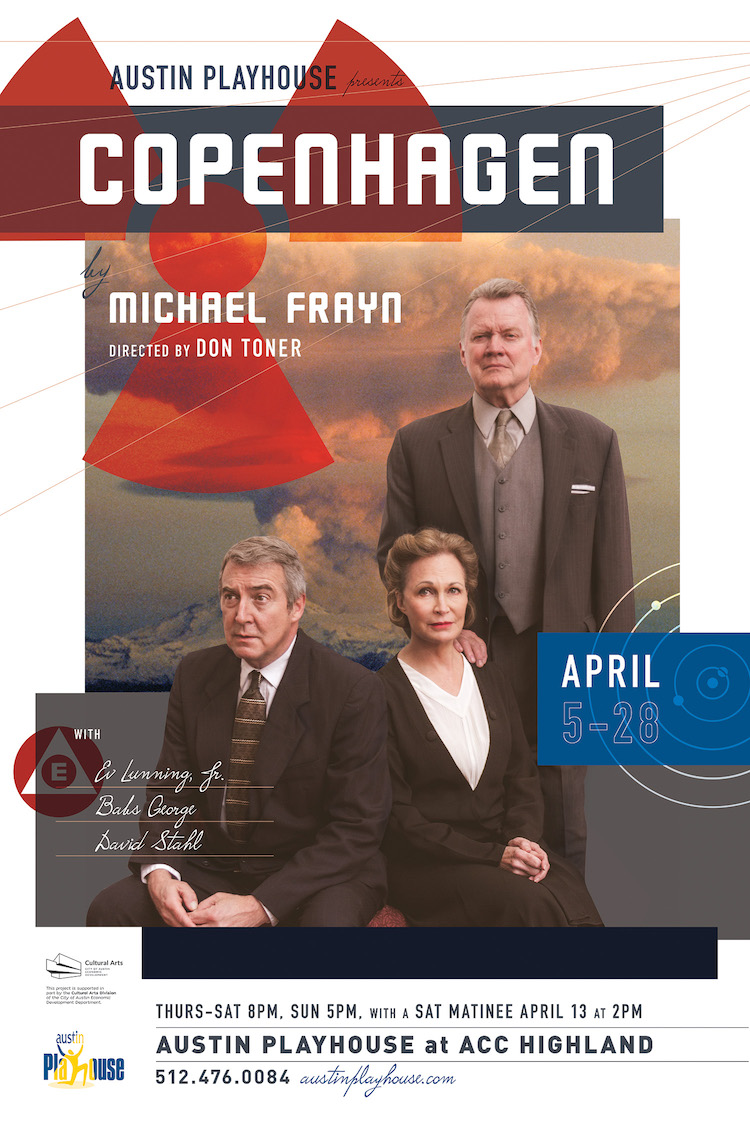