Review: The Afterparty by Shrewd Productions
by David Glen Robinson

The Afterparty by Reina Hardy plays now at the Vortex on Manor Road for one more weekend, until June 30th, 2018.  Reina Hardy doesn’t merely flirt with magical realism this time, she dives into it. Shrewd Productions, led by Shannon Grounds, follows her off the diving board into the great theatre pool. They have a huge success, meeting all the challenges presented by a highly unusual play. And The Vortex is a nurturing presence every step of the way. Here is a massively creative team leading the Austin arts community into more and more original art and performance. They stand well apart from companies and local theatres that limit themselves to profitable contemporary plays cooked to death on the East Coast or to turn-key touring shows in which creativity is polished away in workshops. 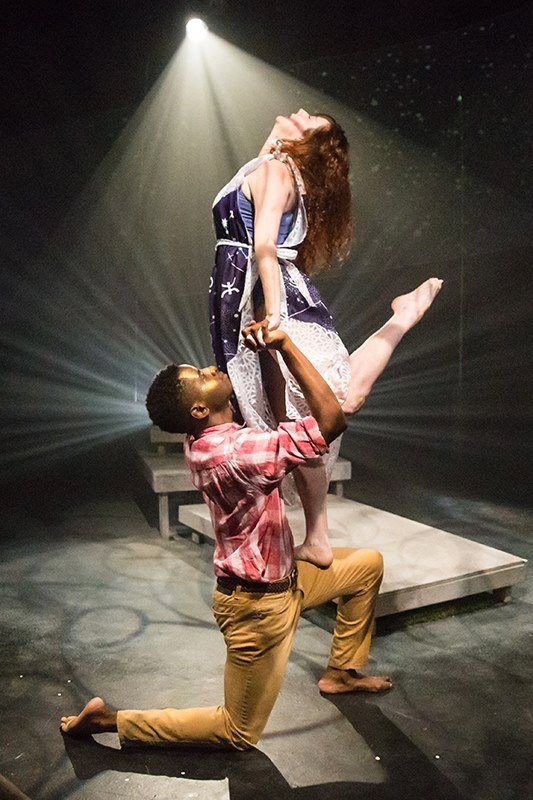 Reina Hardy is the author of Stars and Barmen and Changelings, both produced earlier at The Vortex. All her plays seek t step through the veil and explore what’s on the other side.  Changelings explored the mythology of faery and its interface with day-to-day humanity. Stars and Barmen introduced us to conscious and aware stars, a concept touched imaginatively but rather lightly by science-fiction writer Frank Herbert. In The Afterparty, Hardy embraces the concept fully, with profoundly literary dialogue.

Hardy’s vehicle is magical realism throughout. Other playwrights have a habit, which seems to be trending, of leaping on a magical device, or no device at all, to get to their Big Point.  That is contrivance, of course, and it seems that there is a lot of such these day. Hardy never gives herself an out.  From the first minutes of The Afterparty we lie on a patch of backyard grass staring up at the stars with Claire, a poet of broken heart in young love. Soon we are in the stars in the planetarium set built by designer Ann Marie Gordon. Media designers Andrew Mcintyre and Max Wallace project and animate the constellations of the nightscape while the characters tell the myths and stories from world culture that confer meaning to those arrangements of stars.

The transitions are smooth, and The Afterparty crosses the human and astral scales easily with the image-filled dialogues of a superb cast led by Grounds and including Ja’Michael Darnell, Rommel Sulit, Trey Deason, and Valoneecia Tolbert. The play exploits that school game of asking whom one would choose to have dinner with upon arrival in Heaven. Claire chooses her young lost lover Devon, but also evokes Aristophanes, Johannes Kepler, and astronomer Henrietta Swan Leavitt. In a magical-realist play, the game becomes real. Those personages associate our post-Big Bang, post-Hawkings, and post-Feynman universe with the wisdom of pre-Campbell ancient mythology and the findings of archeo-astronomy. They all seek to explain how we fit into the universe and what we contribute to it. Their stories vault into the fantastic, with actors wearing metal animal masks and culturally abstracted costumes by Monica Pasut to add a hypnotic tincture to our witnessing. 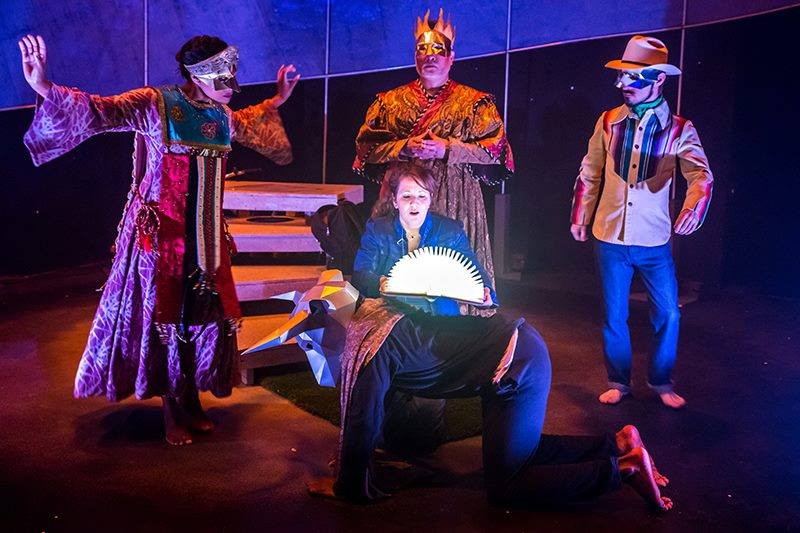 These unbounded passages are full of movement and dance.  The choreography is uncredited in the program, which in most plays means that it reverts to the director.  For The Afterparty that’s Liz Fisher. She is adept at filling the space and avoiding time gaps into which the audience may fall and become lost. With the dance, the performers could easily have moved in a more “full-out” fashion or commitment to their movement without appearing at all overdone or risking a frenetic or harried pace in the overall progress of this rich play.

As Rommel Sulit comments in his character of Aristophanes,  “No, the universe can’t be understood.  That’s why we use metaphor.” Playwrights are friendly with that, and Hardy takes us to the end of the play through a starry sky of metaphor.  Physics is changing our knowledge and perceptions of reality yet again, and not for the first time since Einstein. The Afterparty would have us see the change in part as a move from a mechanical universe to a blessing universe. In The Afterparty the love and fascination with which we look up at the stars are but a small return of that which shines down on us.

The Afterparty by Reina Hardy, produced by Shrewd Productions, is recommended for ages 12 and up.  Haste is also recommended, for the run ends June 30, 2018 at the Vortex in East Austin.

Video Promo for The Afterparty 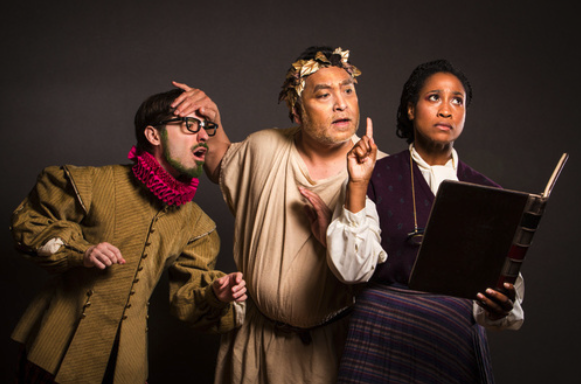 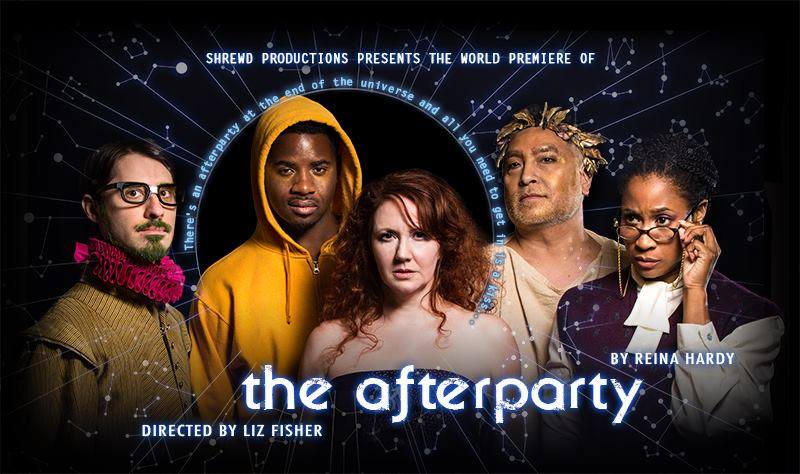