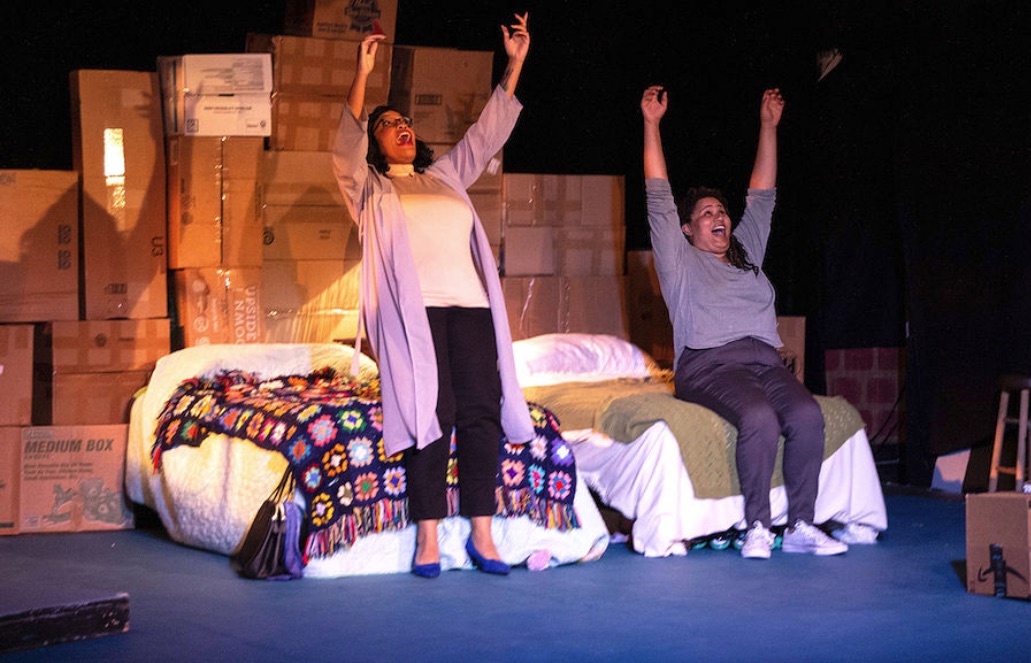 by Michael Meigs
Published on September 20, 2019

What, after all, is the purpose of our existence, particularly if we keep missing the connections that should be so important? What happens to a family when death alters its fundamental reality? What's the motivation to keep on keeping on?

There's an air of dreary predictability to Charly Evon Simpson's Jump, currently playing as Shrewd Productions' participation in the rolling world premier in cooperation with the National New Play Network. The set is ramshackle, the lighting is low, the themes are bleak; if you're looking for an upper, this earnest work won't provide it.   Indigo Rael's design divides the broad, shallow playing space at the Santa Cruz Theatre into halves. To your right … 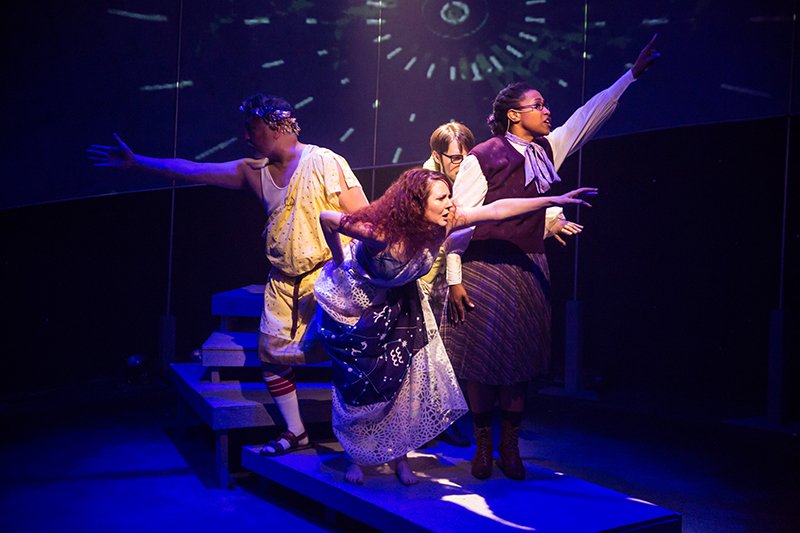 Review: The Afterparty by Shrewd Productions

As Rommel Sulit comments as Aristophanes, “No, the universe can’t be understood. That’s why we use metaphor.” Reina Hardy's THE AFTERPARTY evokes our love and fascination with the universe that shines down upon us.

The Afterparty by Reina Hardy plays now at the Vortex on Manor Road for one more weekend, until June 30th, 2018.  Reina Hardy doesn’t merely flirt with magical realism this time, she dives into it. Shrewd Productions, led by Shannon Grounds, follows her off the diving board into the great theatre pool. They have a huge success, meeting all the challenges presented by a highly unusual play. And The Vortex is a nurturing presence every step of the way. Here … 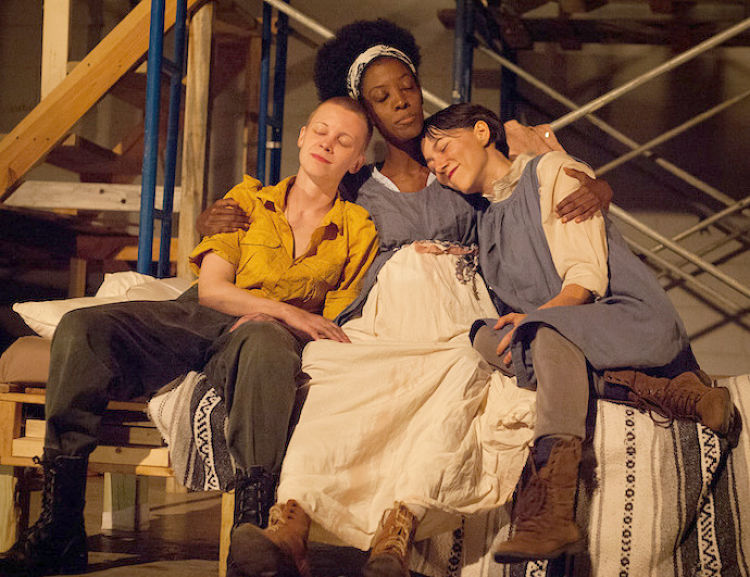 The characters are on a raft adrift upon an empty sea with no hope in sight. We the spectators are the ghosts in the room.

The Immediate Jewel of the Soul   “Good name in man and woman, dear my lord, is the immediate jewel of their souls. Who steals my purse steals trash.  (…..) But he that filches from me my good name robs me of that which not enriches him, and makes me poor indeed.”   These words from Act 3, scene 3 in Othello summarize both Iago’s fiendish plan and one of the play’s largest themes.  It … 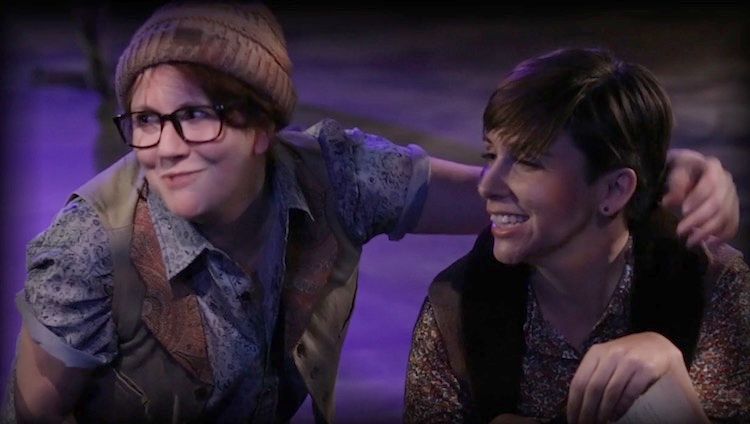 by Michael Meigs
Published on February 24, 2016

The Shrewds' ingenious AS YOU LIKE IT does the piece proud -- it's an enchantment to be cherished.

This is a land of dreams, enchanted and enchanting. As You Like It is always fun, and this production is something special. Director Lily Wolff draws into this magic circle both familiar Austin devotees of Shakespeare performance and attractive newcomers. And the Shrewd company is just that: knowledgeable, confident, plausible and entirely winning.   Set initially in the court of an irascible and usurping duke, it's a quick-moving tale of women friends' escape to the forest … 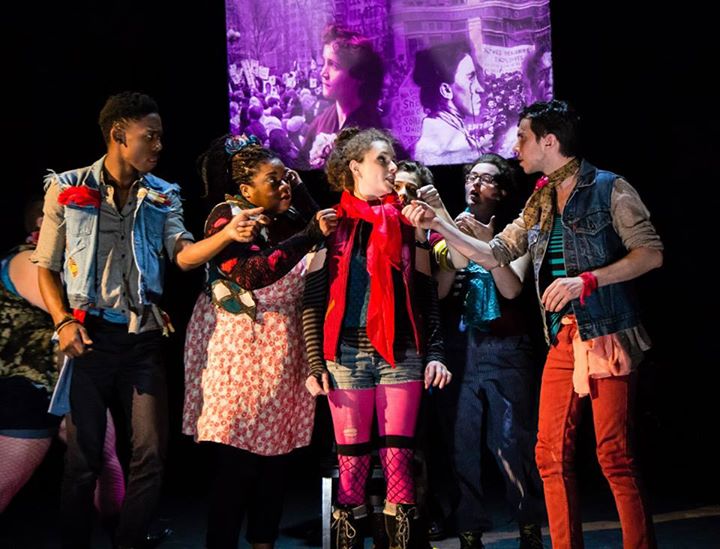 Review: Emma When You Need Her by Shrewd Productions

There’s a protean churning in the cast, for these twelve actors gather as crowds, audiences, workforces and hounded dissident conspirators.

The immersive experience of an ensemble piece like Emma When You Need Her can be disconcerting.  You walk into the black box of the Vortex Rep to find people milling around, and someone — who was it, now? — offers you a chunk of chalk and invites you to write on the unadorned walls. Well, why not? Chalk thoughts and images bloom as the seats fill.  The  cheerful troupe of actors in ragtag attire swirls … 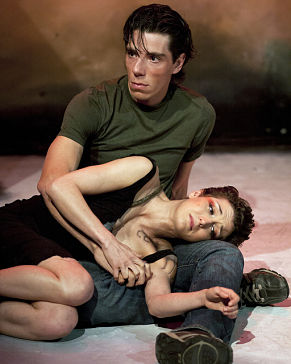 Amelia Turner as the clever, graceful and finally intensely physical dragon girl deliver an electric, devastating speech about the sexual act -- a physical and sexual climax in itself serving at the same time as the climax that seals the link between the two dragon plays.

The Dragon Play confused me as I sat in the front row of the sparsely populated Blue Theatre on opening weekend.  That was deliberate on the part of playwright Jenny Connell, abetted by Shrewds director Shannon Grounds.     The director has given away enough of the story in a second video interview just released by the company, so I'm dropping no 'spoiler' by telling you the company is presenting two dragon plays, starkly different in style, alternating …