We are beyond excited that our first solo show of our 2020/2021 season will be CURANDERAS & CHOCOLATE: CUENTOS OF A LATINA LIFE
Written and Performed by Patricia Zamora - Actres sand Directed by Laura T Garza

Patricia is an actress and writer living in San Antonio, Texas. She is best known for her solo show Curanderas & Chocolate: Cuentos of a Latina Life and as the endearing Sylvia in the long running smash hit Las Nuevas Tamaleras. Patricia has been a member of the Burras Finas Acting Company for five years.

She has dedicated herself to the arts for all of her life and worked in the arts in many capacities since 1987: on stage, behind the microphone, as a teacher, director and as a marketing and fundraising manager at the Alley Theater. Patricia was also a company member in Plays for Living in Austin and Houston's Bill and Teks Excellent Theater Company.

Both of those theater companies brought messages of hope and faith to young people. As a President and board member of a RGV theater company in 2003, she launched Teatro Vivo, which brought bilingual theater to the stages such as, Josefina Lopez’ Real Woman have Curves and Milcha Sanchez-Scott's Roosters, in which Patricia directed.

Patricia's writing is strongly influenced by her mother and the mystical stories that she has shared with her. Growing up in rural South Texas was an amazing place to nurture the creative spirit.

She is obsessed with personal development. You can usually find her listening to a podcast or audiobook, writing for her blog, reading and honing her craft as an actress. She has a BA in Theater from St. Edward's University and a Masters degree, from the University of Texas Pan American.

You can hear Patricia in the recently released Audible Parade Productions web series Triple Six and the upcoming Stephen King Dollar Baby Project, One for the Road. Her one woman show Curanderas and Chocolate: Cuentos of a Latina Life made its world premiere in April 2019 at The Overtime Theater. Patricia was then selected as an "Artist in Residence" at the Historic Guadalupe Cultural Arts Center, Teatro Salon where her show ran to sold out audiences.

She wishes to thank Nicole Erwin and the Overtime Theater, Jorge Pina and the Guadalupe Cultural Arts Center and Laura T. Garza and Teatro Audaz and the Public Theater for the opportunity to take the stage and share her stories.

Also many thanks to Rick, Xander, Chloe and Jade Esteban Estrada for your support and encouragement.

Tickets go on sale Sept 1st and can be purchased through our website at www.teatroaudaz.com or through The Public Theater of San Antonio box office. 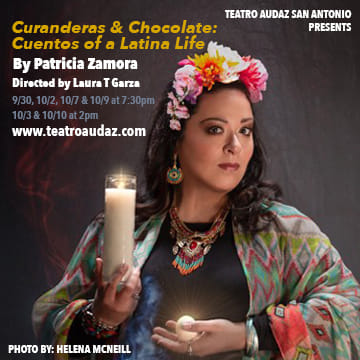