Tony Manero is a clerk in a paint store in Bay Ridge, Brooklyn. But he lives for Saturday evening and his visit to the local disco, 2001 Odyssey. At the disco Tony is no longer an inconspicuous employee, he is the king of the dance floor. There he meets dancer, Stephanie Mangano. The two decide to take part in a dance competition. Although Tony is interested in a relationship with Stephanie, she rejects him, thinking that she can pursue higher goals and meet a better selection of men in Manhattan. But Tony and Stephanie continue to rehearse and win the dance competition. However, Tony, not happy because a competing pair of Latino dancers was clearly better, hands the championship trophy to them. The dispute divides Tony and Stephanie. After some very tragic events, Tony and Stephanie decide to remain friends.   The Music: Almost all of the songs from the original movie sound track are included in the stage musical. The album remained 24 weeks on the top of the U.S. album charts and stayed until March 1980 on the charts. In the UK, the album also achieved first place for 18 weeks and it is one of the most successful movie sound tracks of all time. In 1979 it won a Grammy as Album of the Year. In 2003 it reached # 131 of Rolling Stone's "500 best albums of all time".

Based on the Paramount/RSO Film and the story by Nik Cohn. Adapted for the stage by Robert Stigwood in collaboration with Bill Oaks North American version written by Sean Cercone & David Abbinanti Featuring Songs By THE BEE GEES Song Credits: Music and Lyrics by Barry Gibb, Maurice Gibb and Robin Gibb 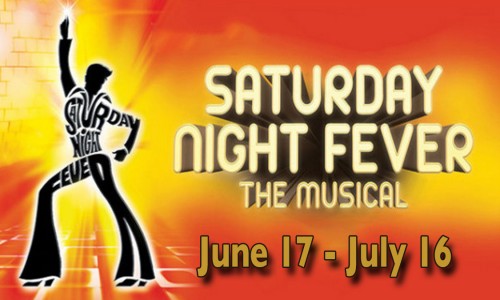