I don't watch television.  I don't have cable TV service in the house, and I especially avoid television news.  Even when the editors strive for balance in face of controversy, TV reporting makes you stupid.  Most of it is essentially entertainment, so the programmers can't resist lurid exploitation of violence and catastrophe.  That's what the public wants and has wanted since the days of Aristotle: stories that arouse pity and fear.

So you'll understand my impatience when, before the play, Austin Playhouse ran a straight-off-the-tube sequence of scenes showing Middle East conflict, violence and desolation. Yes, the videos did help framethis tale of the return to the United States of a woman photographer injured by a roadside bomb in that godforsaken part of the world.   The story was to be told in fits and starts and in retrospect -- as in Greek drama, dialogue reveals decisive events that took place very far offstage. The Brooklyn apartment set crafted by designer and scene carpenter Mike Toner is at the same time a refuge and a claustrophobic cage for these characters.

The stacatto of that violent background, on a screen that deftly rolled up and disappeared from the set as the play began, provided no understanding of the essence of self-perpetuating conflicts deeper, deadlier and more violent than any we've experienced in North America in the last century and a half.

Of course, that's part of the playwright's justification for spinning us this tale.

Time Stands Still is a far more confined and claustrophobic little story than the one glimpsed on the screen.  Playwright Donald Margulies describes the uneasy slow-motion breakup of a couple who experienced trauma together and were split apart by their reactions. Sarah Goodwin (Molly Karrasch) stuck with her job as war photographer and is now arriving, invalid, accompanied by her long-time male companion James Dodd (Brian Coughlin), who went back into the hellhole to retrieve her.  Piecemeal revelations, awkwardly delivered in this script, fill in the events, while Sarah's magazine editor Richard (Huck Huckaby) entreats the two to re-engage and deliver additional commercial product.  Richard's the stereotype of a well-meaning urban bourgeois, comfortable with a mid-level publishing job and a young girl friend who appalls our supposedly sophisticated protagonists. 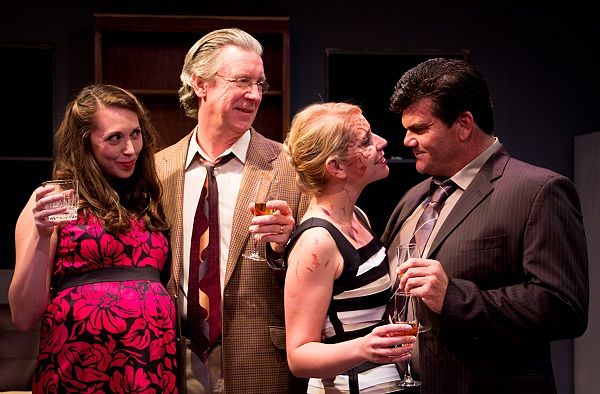 Margulies does a good job of capturing the earnest arrogance of a certain stratum of urban intellectuals. They're a distinctly unappealing bunch.  Playgoers at the Los Angeles and New York productions in 2009 and 2010 probably recognized themselves and many of their own concerns.

Director Don Toner and the cast adjust the pitch and flow appropriately, moving from quiet, wary and suppressed exchanges to fierce shouts and rants.  This play's primarily about the effort to connect, to commit and to trust as one's own ego is raging to go elsewhere.  Physically and psychologically the incapacitated woman photographer has a distant sour bitterness that's probably not new and not due exclusively to her injuries. James devotes himself to distractions as therapy for post-trauma stress syndrome, and his principal distraction is caring for Sarah.

The contrast between their uneasy eight-year alliance and their editor's giddy September-April relationship is an all too obvious plot device.  Jessica Hughes succeeds over the course of the play in moving girlfriend Mandy from sweet bimbo to concerned and still sweet new mother, while Sarah becomes more reclusive, suspicious and determined to escape. 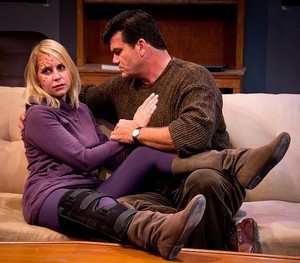 Covering these plot mechanisms are some fine writerly descriptions of the extremes of violent experience in war, principally in Sarah's belated and fruitless self-questioning.  Raised but not really explored are the issues of the photographer as witness, as messenger to a mostly indifferent outside world, exploiter of the pain of others and thrill junkie.  The fiercest and most telling passage in this script comes as Sarah recounts a flashback.  She remembers hearing an explosion and racing through the streets to record the aftermath; a bloodied angry Arab woman screamed at her and shoved her away from families' pain and suffering.

Margulies knows that he's writing for complacent American audiences. He can't resist inserting a second-act alcohol-fueled rant by James when they return from a theatre piece depicting the disasters in the Middle East.  James the character has ample reason to scorn an audience full of self-satisfied, unengaged liberals, but Margulies's attempt at irony undercuts his own message rather than reinforcing it.

Karrasch, although a gifted actress, is severely constrained by a sarcastic character who moves, if at all, mostly from anomie to sarcasm.  Coughlin's character is the more interesting, although not subtle, and Coughlin steers James carefully between the suppressed turbulence created by concerned devotion and resentful exasperation.

These small boats move in different directions over the dark waters of our small world. James takes refuge by embedding himself in the calm comfort of American popular culture and homeland ritual. But there's no twelve-step plan for real adrenalin junkies like Sarah.  This engaged -- or more probably obsessed -- photographer never answers her own questions or resolves her self-doubts. She simply sets them aside, picks up her paycheck and her Leica, and goes back to work feeding the media machine.

Recommended for audiences 18 and up due to adult language, mature situations and depiction of smoking. 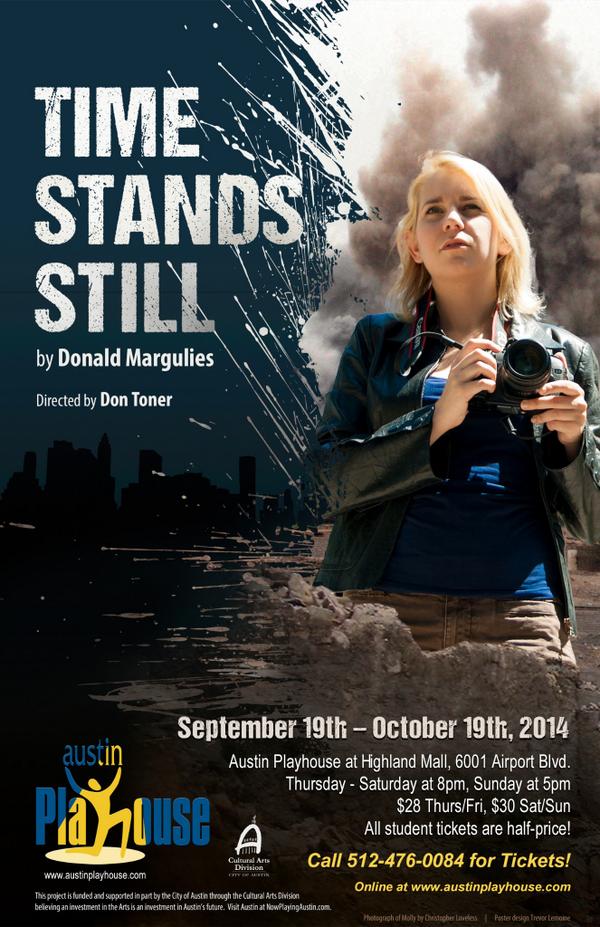