Review: The Tragical History of Doctor Faustus by Baron's Men
by Michael Meigs

You're in a Halloween sort of mood? Then the Baron's Men's production of Marlowe's The Tragical History of Doctor Faustus is for you.

The legend of the learned man who sold his soul to Mephistopheles in return for 24 years of worldly power and exhaltation is a deeply tragic tale, one that deftly symbolizes our perpetual longing for more in this present life -- more things, more scope and more experiences. In fact, playwright Christopher Marlowe, author of five powerful plays in blank verse, may be seen as a Faustian figure. In May of 1593, some time after writing The Tragical History -- the exact sequence of the plays is unknown, for all except Tamburlaine the Great were published postumously and undated -- Marlowe was stabbed to death in a tavern. He'd been summoned by the Privy Council and may have been suspected of treason and spying.  He was only 29 years old. What a loss was there!

Directors Liegh Hegedus and Victoria Kelly take the stage beneath the flaring torches of the Elizabethan-style Curtain Theatre in Austin to preface the production with this background. They then cede the boards to a production that much of the time achieves the grandeur of a pageant. Four Angels open the action, and their elaborately wingéd and pluméd costumes set a bar that is met and at times wildly exceeded by designer Pam Martin's fourteen-member crew of stitchers and costumers. 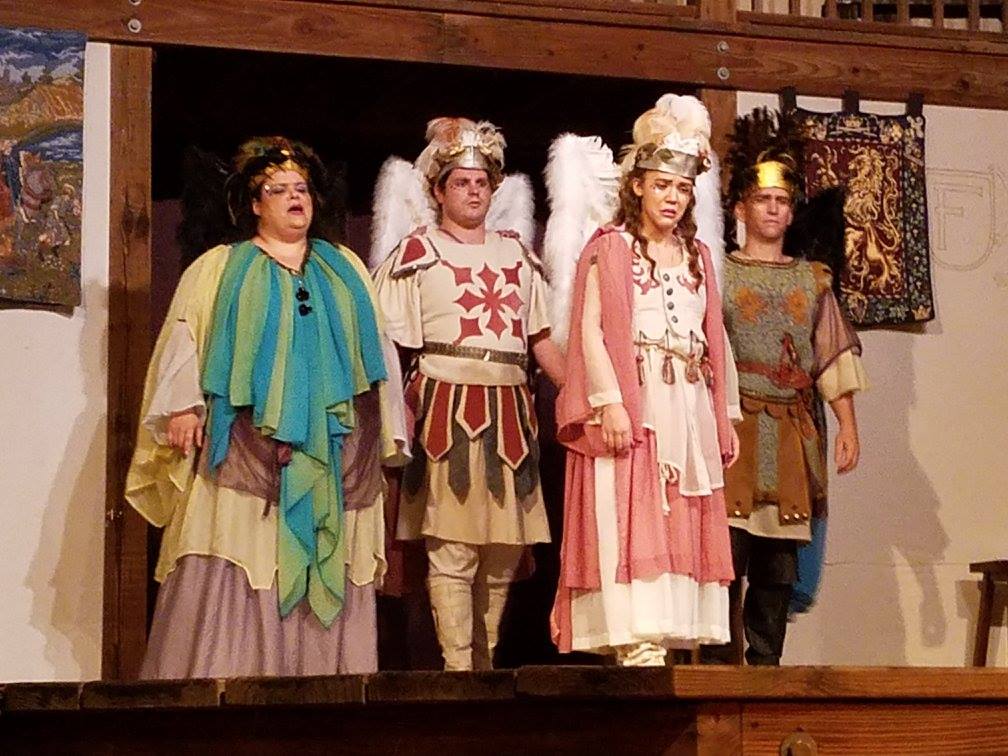 While the words and scenes are Marlowe's, the visuals are all Pam Martin's. The Angels put me immediately in mind of some of the Austin enactments of La Pastorela, the traditional Mexican Christmas play, while leading characters Faustus (Charles Smith) and Mephistopheles (Casey Jones) are encased in elaborate well-tailored Ellizabethan raiment. Marlowe's piece is episodic. Faustus' desires and misgivings are set forth in scenettes and, curiously, we rapidly discover that Faustus and others are less interested in the wealth at the command of the denizens of Hell than in the experiences they offer. 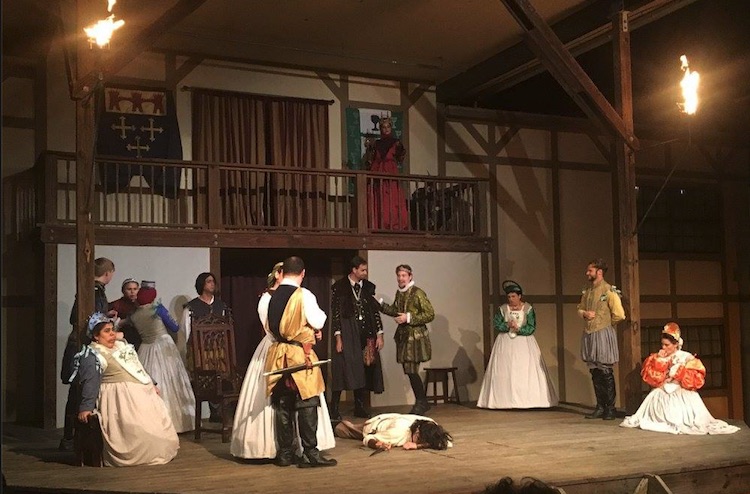 Faustus abjures book learning in order to make his deal with Mephistopheles. Tomes of esoteric lore are considered and flung across the stage, and Faustus' factotum Wagner (Jonathan Vineyard) repeatedly has to recover them. Faustus is frustrated and temperamental; once he applies necromancy to summon the devil, Casey Jones as Mephistopheles exudes power, charisma and intelligence. Sara Rachelle as Mephistopheles' familiar Beelzebub is the hissing, gesturing, menacing opposite on the scale of hell, and her portrayal is a terrific clowning caricature. Jimmie Bragdon eventually shows up as Lucifer, the big dog in Hell, and he wears a golden crown with red points matched by a costume of the same crimson. 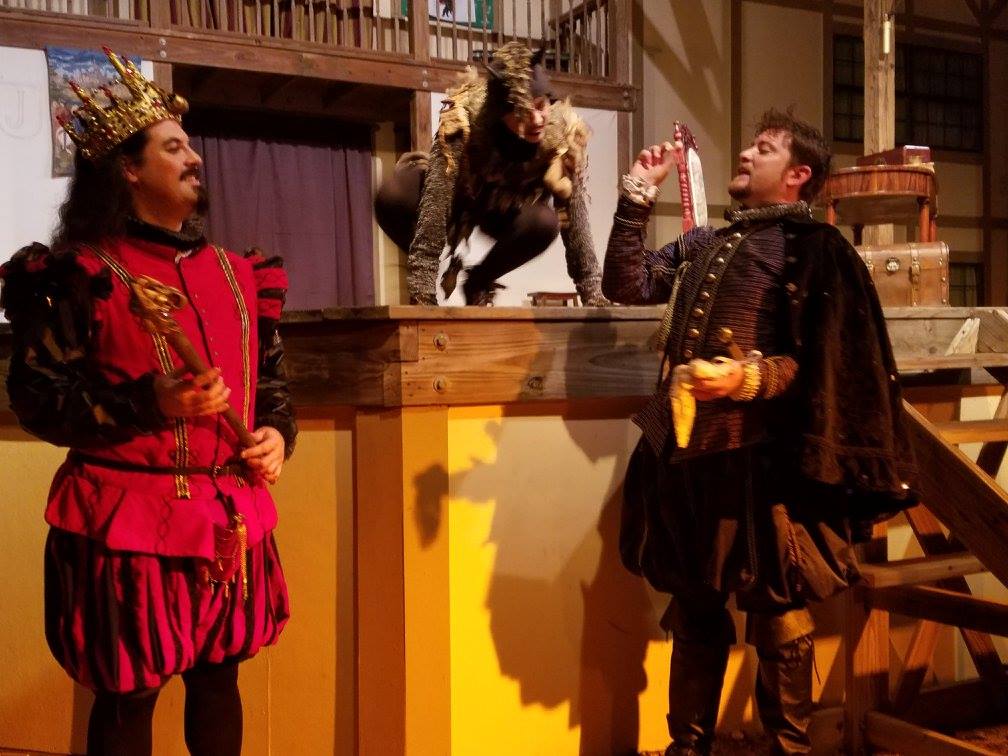 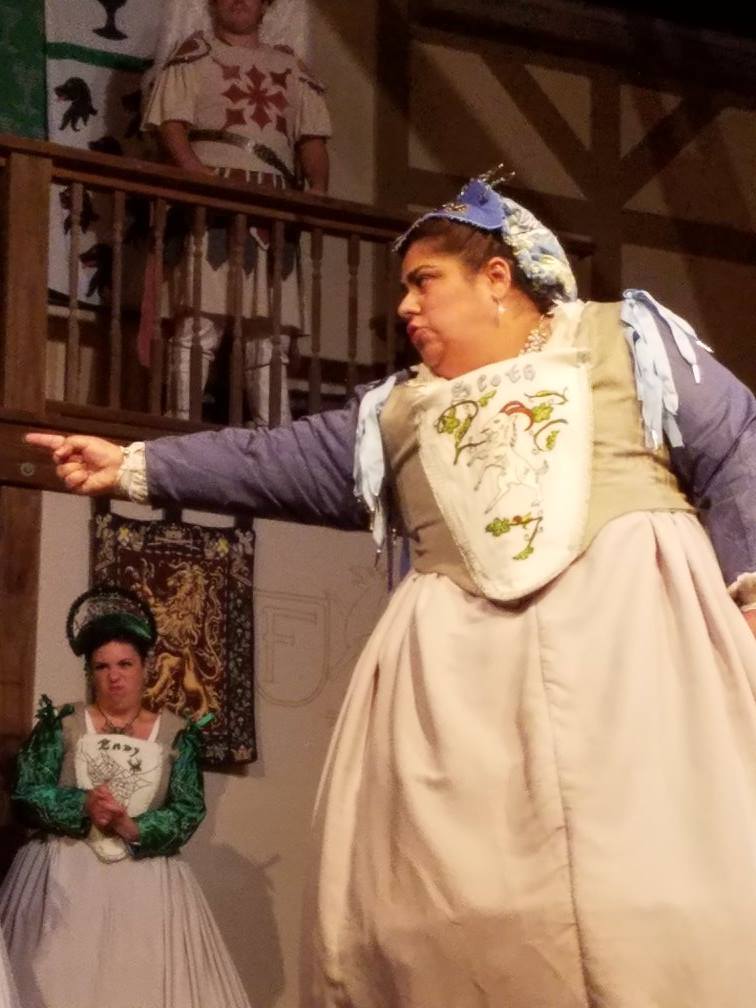 The sense of pageant is reinfored by the fact that there's relatively little double casting here. In the parade of the Seven Sins, each is solo cast, costumed with imagination and delivered with panache. The evident favorite is Eva McQuade as Sloth, drifting unimpressed through all the shenanigans. Nguyen Stanton as a distracted Lechery reappears later as Helen when the emperor, Nolan Blair resplendent in a green tunic, persuades Faustus to use his magical powers to summon the characters of the Iliad.

Marlowe, a canny dramatist in Anglican protestant England, even tosses in a farcical sequence in which the invisible Faustus and Mephistopheles confound the pope and his cardinals in Rome.

The real mystery in the Tragical History is Faustus' failure to repent. In the time granted to him -- lavish at the start and then desperately inadequate as the years ebb away -- he gains powers and renown in this secular world. Despite the angels' urgings, he is for some indecipherable reason incapable of addressing words of repentence to a forgiving God. Mephistopheles, familliar and immediate in Jones' vivid characterization, has more influence upon him; eventually Faustus disappears to the Underworld in a clevely directed sequence involving a symbolic handkerchef, crowding demons and a trap door stage center at the Curtain. 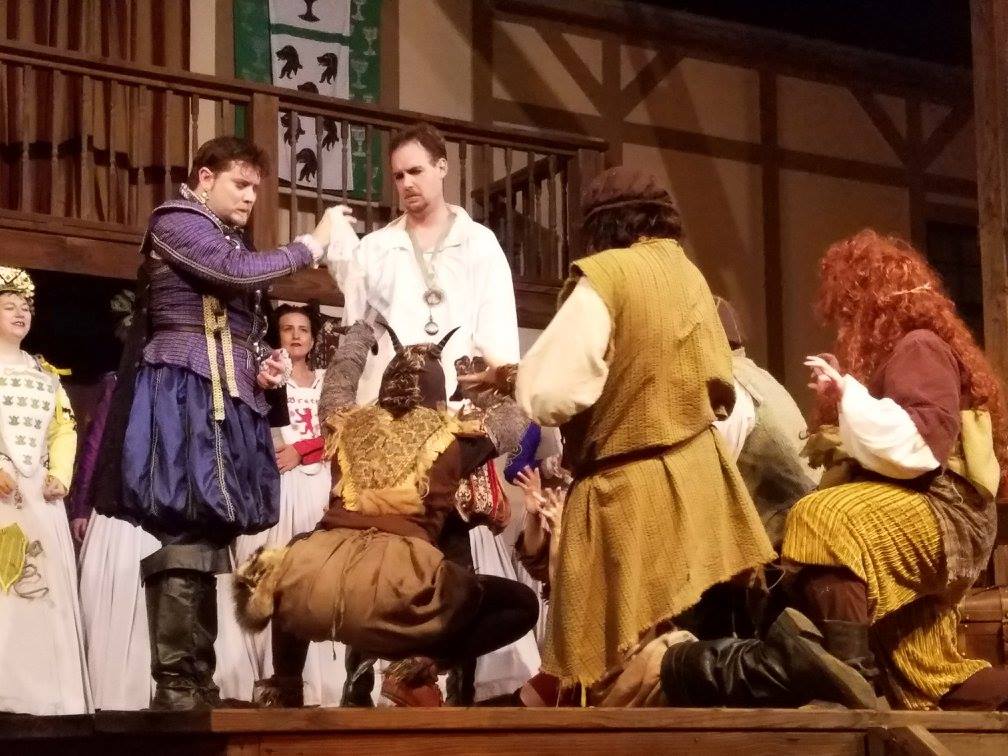 As always, the Baron's Men use music to good effect. A lithe recorder is accompanied by a sometimes awkward horn for the interval music, and the chorus led by Kate Clark (also hight Pride among the Sins) calls the audience back from intermission with sweetly delivered madrigals.

The Baron's Men and the Curtain Theatre of Richard Garriott, their home venue, remain far less known to the Austin theatregoing public than their assured programing and dedication deserve.  They perform Doctor Faustus' travails for a final weekend this Thursday, Friday and Saturday, October 20 - 21, 2016.

Additional information and tickets to be available via www.thebaronsmen.org