Review: The Threepenny Opera by Trinity University
by Michael Meigs

It must be a thrill to perform in that jangly, dissonant and exuberant Brecht-Weil world of The Threepenny Opera, especially for college-age artists. It portrays a society turned upside down, one in which we're rooting for a an elegantly carefree, immoral and unrepentant thief and murderer. The wealthy and the bourgeois exclude and exploit the denizens of the Victorian underworld, and Macheath (the stylish Alejandro Cardona) hasn't the slightest remorse about beguiling and betraying the downtrodden even further.

Director Kyle Gillette takes a large, enthusiastic young cast and hurls it at the audience. The staging is Brechtian, in that the company is insistently reminding you of theatre artifice and stage convention. Sets are rudimentary and scenes are changed by pulling a drape suspended from a clothesline across the stage. The staging is close to musical vaudeville in some of the choreography and in the convention of addressing most of the lines to the audience rather than to the other performers onstage.

There's no pit orchestra for this darkly humorous operetta. James Worman leads a capable ten-piece music ensemble camped out on the apron, stage left. Performers acknowledge their presence with commentary, gesture and a couple of running gags, the funniest of which targets flautist Eliza Wright for her sweet innocence. The positioning of the musicians works at all but the opening ten seconds of the stage action. Following the overture, the 'ballad singer' (not further identified in the program -- Tyler Ussery?) steps through the curtain immediately behind the musicians. He's both inaudible and invisible for the first two or three lines of the famous Ballad of Mac the Knife. After he gets around the musicians and the conductor he steps up to a standing microphone, and all is well.

Notorious Mac the Knife has eloped with sweet Polly Peachum (Jasmin Weber), whose parents operate a small army of professional beggars assigned to districts across London. Matthew Reynolds as Peachum is a natural, in character at every moment, an actor with a fine voice, master of a cocky stage presence as beguiling and enticing as that of Cardona's Mac the Knife. Amy Rossini as the squalling, swilling, worldly-wise Mrs. P is a comic phenomenon all her own. She doesn't court the audience so much as bowl them over; her pep, focus and singing make her an irresistible attraction whenever she's on stage. 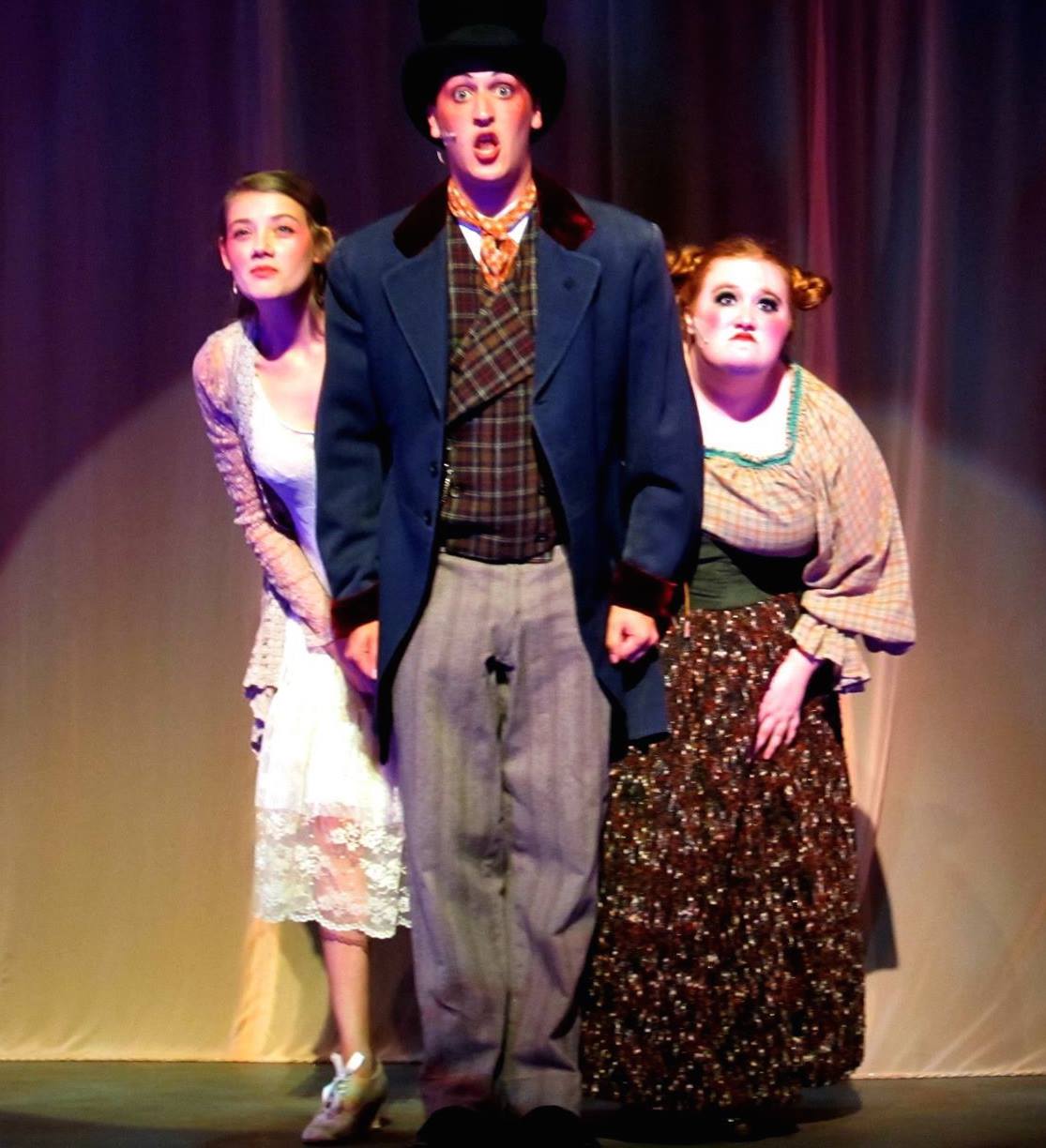 Mac's band of pickpockets and thieves is played mostly for laughs. In early scenes they furnish a stable with stolen goods and attend the wedding celebration of Mac and Polly (who, despite the beaming presence of Jackson Beach as clergyman Rev. Kimball, seem never to have formalized their liaison). On opening night the actors of Mac's band were often over-busy, distracting from the main action when their expected dramatic function would be to focus it with their close attention. The attractive negligée-clad prostitutes in later scenes did better in that regard, both when pulling curtains at scene changes and in the second-act brothel scenes.

Macheath's foil in The Threepenny Opera is Tiger Brown, former comrade-in-arms in the British army in India, currently London's chief of police. These pals embody the corrupt relationship between authority (Brown) and crime (Macheath). The principal action of the play is the effort by the Peachams to get Macheath arrested and hanged, a campaign that  pushes constantly against Brown's long-held personal sympathy for Macheath. He tries and apparently fails to protect his friend. In a sense, the battle of the drama is fought out in Brown's spirit. 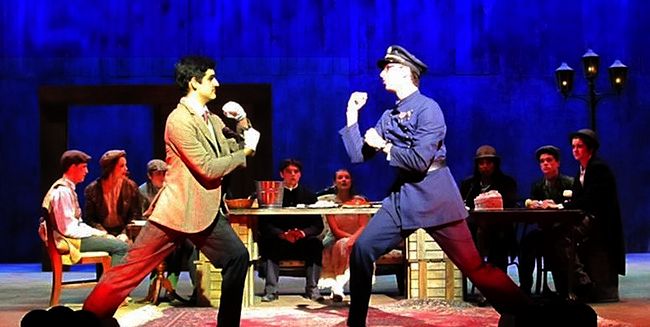 Given the centrality of that fraternal bond, the play is best served when these two are credibly matched, if possible, in physique, ability and powerfully smiling cynicism. That doesn't happen in the Trinity University production, in part because Tiger Brown is played as comic weakling, a Keystone Kops personality abashed and overwhelmed by Mac, his opposite. The actors are physically dissimilar. Further, Nicholas Champion as Brown has a cheery, flailing energy quite unlike Cardona's command and guileful self assurance. 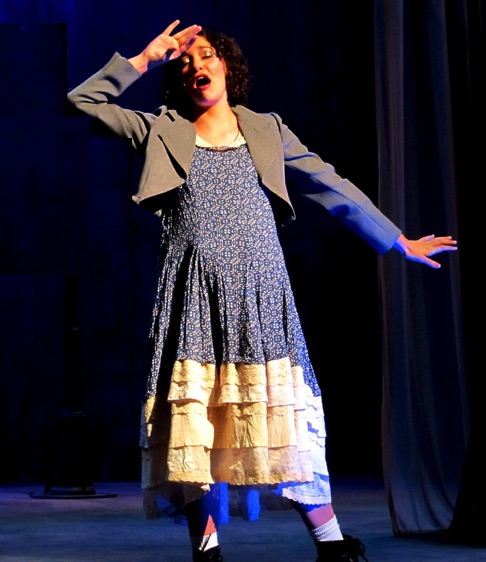 Brecht and Weil created memorable roles for women, for Macheath the serial seducer left many broken hearts behind him. Jasmin Weber as sweet Polly sings well, and her duet/duels with the jilted Lucy Brown are entertaining. Tristan Harness as Lucy comes out ahead in voice and acting chops, but only just. Arianna Rafaele Payson as Mac's earliest abandoned romance Low-Dive Jenny is also strong. Her decision to betray Macheath will bring him eventually to the gallows. I'd like to have seen more focus on her inner conflict, with blocking and lighting to punch the spectacle of her indecision.

The second-act scenes in prison place Cardona in a wide-barred cage on center stage. There's some amusing business with the locks and doors as Mac seeks to bribe his way out. It might have been less distracting to construct the cage in cut-away -- that is, with no downstage wall of bars -- to give us a better view of his gestures, acting and singing.

It's the women, God bless 'em, who are the men's downfall. Not so much of their own intention but rather because Macheath's infidelities and emotional exploitation are far less easy to forgive than thefts and assassinations. Our protagonist is dapper and immoral, and we watch with tense fascination as he mounts the scaffold. That noose draped about his neck looks disturbingly stout and convincing.

Rascals will be rascals, damning all on the way to the drop.  But our Mackie has a charmed existence; how could we possibly do without him?

Click to view the program of Trinity University's production of The Threepenny Opera.

The Threepenny Opera
by Bertold Brecht and Kurt Weill, based on John Gay's opera
Trinity University

For ticket reservations, please purchase your tickets online, email tutheather@trinity.edu or call the Box Office at 210-999-8515 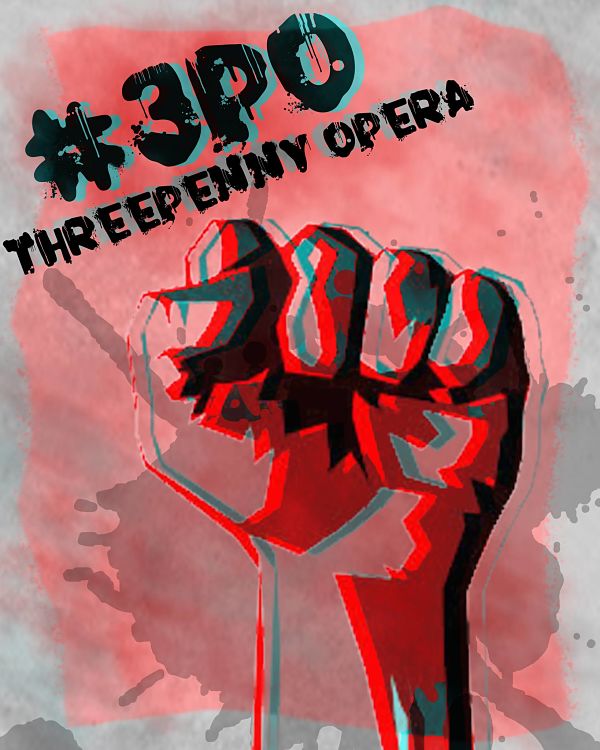 The department of human communication and theatre at Trinity University is a single administrative unit with two complementary, but relatively independent, academic programs, each with its own major and minor. Students …