Review: The Strangerer by Capital T Theatre
by Michael Meigs 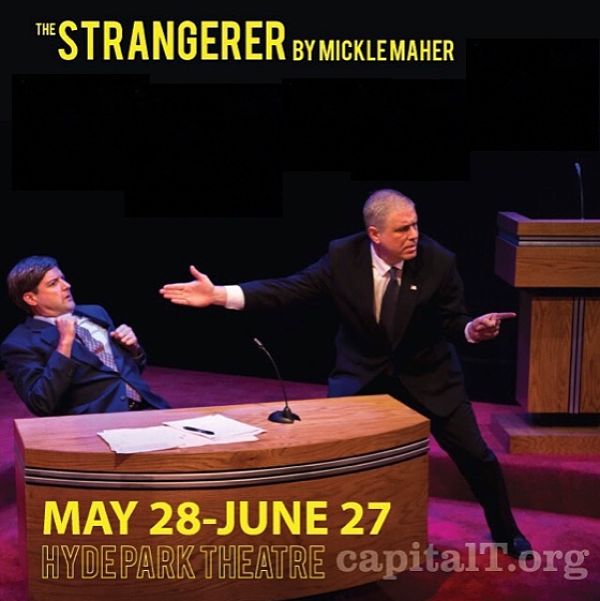 Mickle Maher's The Strangerer is profoundly witty. But it's not comical. You may go into the agreeably conspiratorial Hyde Park Theatre with the expectation of laughing it up on the dark side, making fun of politicians in general and Bushes in particular, but you're going to get a short sharp shock.

Capital T Theatre, Mark Pickell's comfortable co-conspirator with Ken Webster's Hyde Park Theatre, is going to get up your nose with some serious absurdity.  Like HPT's The Christians of last March, The Strangerer tempts you to laugh in its early moments and then renders you increasingly nervous as you buy into the premises of its world.

Maher's 2008 piece for Chicago's Theatre Oobleck takes as its point of departure the 2004 presidential election debate in Coral Gables between President George W. Bush and Senator John Kerry. As you file into the theatre, newscaster Jim Lehrer is sitting at the moderator's desk front and center, going over his notes, doing lip exercises, clearing his throat, watching the control booth, counting down intently to the scheduled start of the debate. That's Jason Phelps in a fine touseled wig, and he'll reveal himself shortly in the distinct clipped voice of a tightly controlled newscaster, describing for us and for the watching national audience the rules of engagement -- or rather, the rules of the debate.  He announces the participants and we dutifully applaud.

Ken Webster, complete with combed-back crest, is Senator Kerry, and Robert Pierson is President George W. Bush. Lehrer pitches the first question to Kerry. It's a softball: "Do you, Senator Kerry, believe that you can do a better job than President Bush of preventing another 9/11 terrorist attack on the United States?" Kerry takes a moment to sympathize with Floridians for the recent difficult times they've endured, and he begins to answer.

Then the President murders the newscaster. 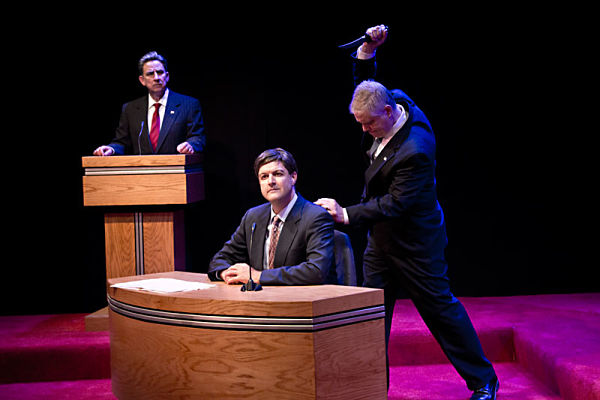 Or appears to do so.

We enter a dizzy loop as the President attempts twice more to do away with Lehrer. And finally Robert Pierson speaks to us in that confused, strangulated Bushian syntax and accent, taking us off into an existential Neverland weirder than any that Alice ever encountered.

This evening is disturbing both because of the story and setting that eventually emerge and because during the telling of it the much derided 43rd president of the United States becomes an Everyman, or at least an EveryAmerican, bewildered by threats, causes and effects, death and-- theatre.  Florida has undergone some terrible enigmatic catastrophe; the President and Senator Kerry have a relationship cordial enough to warrant traveling to view a theatre performance alone and unescorted; a living, shrieking undead shares the President's suite and when he escapes with Kerry, it's to witness the death of a preadolescent refugee hooker and the murder of a child.

If all that blows your fuses and makes the laughter die in your throat, you'll resemble Webster as Kerry the somnabulist. 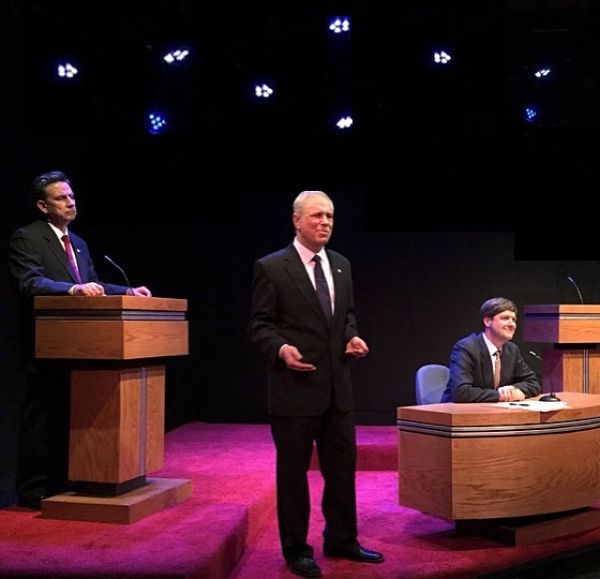 Robert Pierson as George W. Bush, with his pained expression, earnest stumbling speech and astonishing mimicry, is the heart of this performance. The Strangerer at Barrow Street Theatre in New York got a pretty cool reception from the Village Voice when staged shortly after "W" left office; the opening scenes of the Chicago production by Theatre Oobleck can be viewed on YouTube, and the quality of impersonation is nowhere near the skin-crawling verisimilitude that Pierson delivers. Those Northeners, at that time, probably tossed back The Strangerer as agit-prop. But now, six years further down the road and here in the heart of Texas, Pierson and Capital T turn this piece into an exploration of man's incapacity to understand. The focus is far less on the missteps of an administration than on our plight when faced with random catastrophe and evil.

Maher turns W-speak into blank verse, and Robert Pierson does it full justice in articulation, gesture and movement. The malapropisms, fumbling syntax, the silences -- all speak worlds more than the character can manage to express. By throwing that speech up against the newscaster's fluent nothings and the opponent's articulate platitudes, Maher renders the President he's satirizing as a more sincere and anguished character than either of them.

HPT and director Mark Pickell's Capital T once again mark out their territory as the brainiest and most in-your-face production companies in Austin. 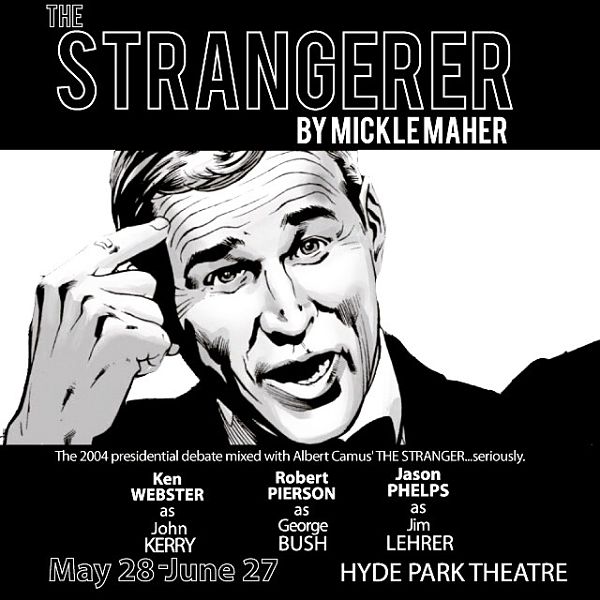