Review: The Long Now by Shrewd Productions
by Michael Meigs

Beth Burns' The Long Now opens with the charmingly simple concept stressed in its marketing:

Tish Reilly has a very special friend – Time. Tish can go back to any place where a good memory remains and enter it, reliving the moments that please her.

We meet the winsome Tish, played by Shannon Grounds, at her dead end job of alphabetizing and filing folders beginning with the letter "F." Maybe this is an insurance company; maybe it's another bureaucracy.

Her boss Tom is a limp self-important macho dolt. Her female co-worker Sherrie laughs at Larry and at the absurdity of their assignments. Good sport Sherrie, played by Anne Hulsman, is always pressing Tish to come along for a girls' lunch or a girls' night of drinking. No wonder our Tish is a dreamer, escaping into reveries reaching all the way back to the warm, safe world of elementary school. Tish goes out to fetch coffee for the office and calls up her friend Time.

Tish receives Time's permission to transform into her tiny self, back when Mom was her best friend, and at school a cute boy named Larry was paying delighted attention to her. 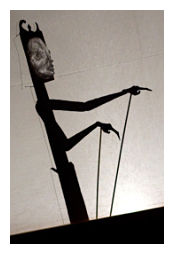 So far, this could be a whimsical children's play, except for some of boss Tom's coarse har-har language and coworker Sherrie's raucous talk.  Nothing too serious is going on. Work is hell, but we all knew that, and the cardboard comic figures make it palatable. There's a cute joke about misfiling the "Pf" names (such as "Pfluger") among the "F" names. We're ready to settle in and enjoy the education and vicissitudes of Tish.

But what about that figure of Time? The puppet figure is visible only to Tish and to us. Time speaks in the eerie voice furnished by T. Lynn Mikeska, patronizing but barely inflected.  Puppeteers Parker Dority & Cami Yankwitt make Jesse Kinglsey's puppet designs come alive.

We are not in Muppet land here.  Time appears as a stark flat articulated figure moving on any of the several screens ranged across the set.  Time appears in different sizes and faces, including one tiny face that in a spine-chilling moment simply dissolves to a gray haze.

This Time is not three-dimensional. As the play proceeds we begin to intuit that Time and memory may somehow be in conflict with one another. 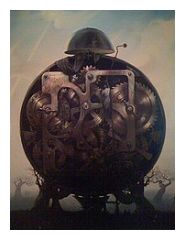 Beth Burns and Shrewd Productions did not begin promotion of this Austin world premiere piece with the cheery sketch with the birdy and the bright red letters, shown above. The earliest intimations of this production were accompanied by the Dali-esque mechanical contraption at the right, stranded in a stark hazy plain featuring enormous barren trees. This is a landscape either of dreams or of nightmares.

The Long Now moves in similar fashion from the childishly evident through a rush of present delights toward a dark tangle of dream and memory. Burns fills in the outlines of the characters, gives them depth and moves them, at times shuddering, forward in time.

Central to this action is Tish's rediscovery of Larry. She encounters him at the site of their primary school, which was closed long before. Larry tells her he has just moved back to town after a divorce, and he's living with his parents. Mason Stewart as Larry is hearty, perceptive and self-deprecating. Tish is charmed, and so are we as we watch the delicate development of a friendship between them and then a full-fledged relationship. 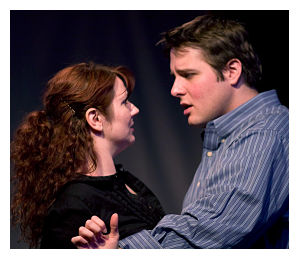 Burns' dialogue for this couple is funny, vivid and true to the careful blooming of love. Her direction of the actors is subtle and effective. Mason Stewart evidences an ease and a depth not common in actors of his age. We understand why Tish with her uncertainties and self-doubts accepts him and trusts him. We watch with unspoken urging as gradually, gradually, she agrees to venture out of her narrow world onto the undefined continent of human feeling that Larry represents.

This is a fine, strong cast of actors. D.H. Thompson as Tom the crass boss fully uses the script's opportunities as action progresses to color over the cartoon Tom and to establish a character with unexpected feeling and nuance. 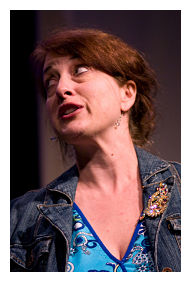 Ann Hulsman as the Tish's vivacious co-worker Sherrie becomes a close comrade and sympathetic motivator. We learn eventually to our surprise that Sherrie has deep griefs but in contrast to Tish she has turned outward in response. 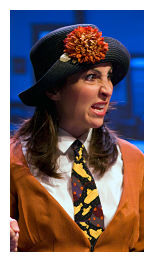 Suzanne Balling appears in multiple roles, including those of Mom and of an impatient schoolmate, sharply defining each and delivering with warmth and humor.

Tish is the focus of this script, both in time and beyond time. Shannon Grounds captures our sympathy early on and retains it through hesitancy and growing confidence. This is a strenuous, unforgiving role and she delivers royally with it. The script accelerates in the second act, flinging Tish forward into a confusion, choices, and a crisis point, and the audience is fully caught up as the dimensions of her dilemmas become evident. 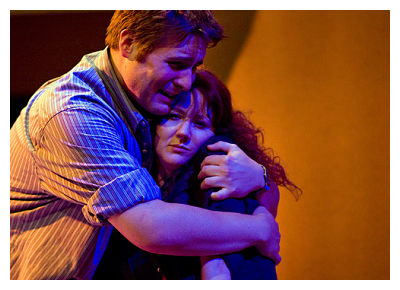 Time insists on its dominion and strives against the brave world that Tish has opened for herself. At Tish's side stands Larry, anchored in the world and raging against the treacheries of the questionable fourth dimension. Burns the playwright lays out for us the tangle of memory, emotion and opportunity, while Burns the director manipulates our perceptions and turns inside-out our understanding of the situation.

This is a powerful, challenging evening of theatre, recommended both for its emotional impact and for the sharp edges of its concept.

Review by Rob Faubion published May 26 at AustinOnStage.com

Review by Elizabeth Cobbe for the Austin Chronicle, May 28

Review by Spike Gillespie for Austinist.com, May 28 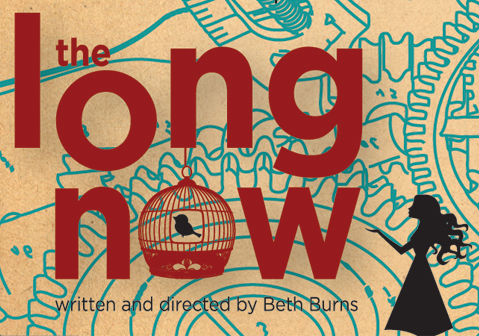 Championing unique perspectives and emerging artists, Shrewd Productions is focused on women's voices, new plays, and work developed though a collaborative artistic approach.  We are committed to creating high-quality ...