The Drowning Girls is a murder mystery told in nonlinear fashion by the murder victims.  The three brides, each drowned in the bath, rise from the water postmortem and sopping wet to tell their tale.The play is definitely a strong textual dialogue play, but not one with parlor scenes in a spacious set with numerous characters, as one would expect from an Agatha Christie mystery. No, here we have a bathroom set, looking perhaps like a Victorian bathhouse with three old porcelain bathtubs in a row. Old-fashioned shower heads (operational) point straight down from above each of the tubs.Large wooden floor beams are widely spaced, like a grill, for drainage, although light beams and other elements shoot up between the floor beams as well. Stone flooring frames the wooden floored bathing area, and three Victorian/Edwardian wedding dresses hang from hooks on the upstage faux stone wall. The characters climb into the dresses early and use a few hand props pulled from the bathwater when needed. Otherwise, the three actors simply realize with their skills the forty-eight characters in the story, including a few cats and dogs. 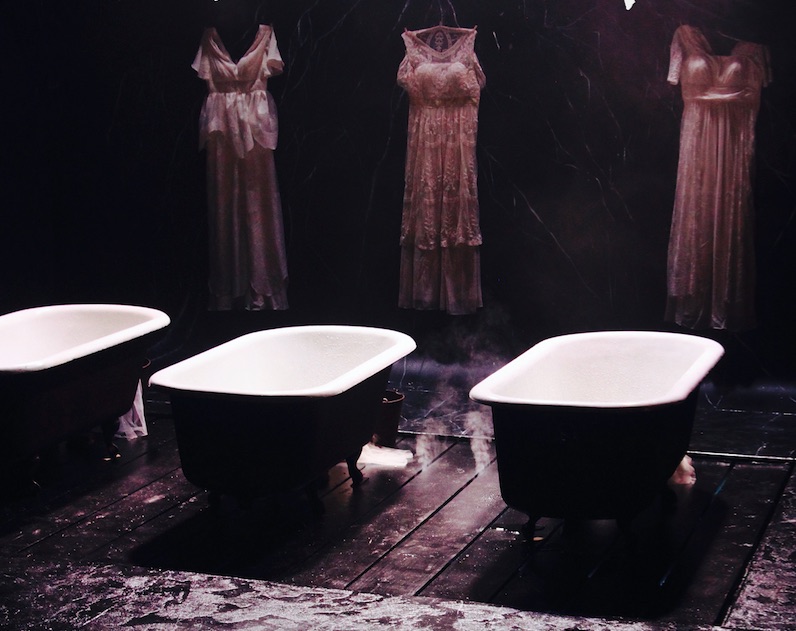 The three brides played by Christin Sawyer Davis, Sarah Danko, and Bridget Farr tell a true crime story from 1912 England.A murderer married three young women serially over a span of about two years, had them sign over their bank accounts to him, name him their insurance beneficiaries, declare him their sole inheritor in their wills, and then murdered each of them while they took a bath. One cannot succeed for long in such obvious monstrousness, and he was hung for it all in 1914.

The heart of the story is the brides’ laments about their plight, their exploitive duping by their murdering husband, restricted choices and lack of empowerment in Edwardian England. They showed rather than told. They were not feminists out of time, explaining the plight of women of the day from an omniscient viewpoint. They mentioned the lack of suffrage and property rights. Pointing to these things served to explain the common women’s strategy of marrying and participating in the husband’s path to success, few other routes being open to them.  There was social pressure on women to marry and choose well. The murderer’s pose as a “gentleman of means” explains partially the brides’ lethal choices of him for a mate. 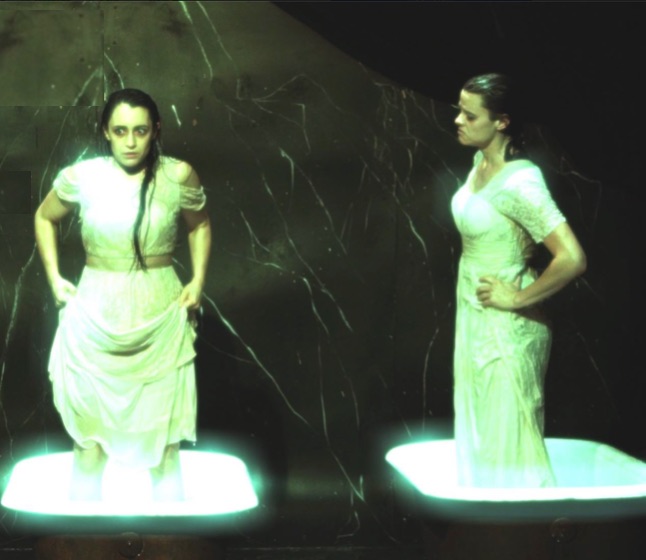 The story is shown in brilliant characterizations by these three women. The bobbies who brought the scoundrel to justice brought a lot of humor to the play, as did the cleaning ladies who sang “Nearer my God to Thee,” and the cats and dogs so briefly portrayed. The through line of puns on “breath” and “breathing” is a tribute to the clever playwrights. I never again want to hear the sentence: “He took my breath away.” The flood of images was created to soggy perfection by the three incomparable actresses. Name them again, they are: Christin Sawyer Davis, Sarah Danko and Bridget Farr. They work well together, and their collective acting by itself is worth the price of admission.

But they didn’t produce the show alone.Director Jenny Lavery, unlike the brides, chose well throughout the production, leading the cast expertly through the somewhat complex blocking, often in cramped quarters. The dance of the legs protruding from the tubs was especially well done, and in lieu of a choreographic credit on the signature skimpy one-page show program, the credit goes to Lavery.The wide-ranging collection of British accents was identified, created, and managed by dialect coach Bernadette Nason. This was uncommon and creative work that deserves highlighting.

The production as a whole, especially with its hydraulic set, was built with Gandalfian aplomb by production manager Blake Addyson. He turned from striking Theatre en Bloc’s The Totalitarians and the following day began the load-in of The Drowning Girls at the Vortex. Approximately five days later the play opened to ticket buyers. Most impressive and worthy of great credit.

The aforementioned set was designed by Chris Conard, who also built the set for The Totalitarians.  It seems the community has found another hardworking and virtuosic set designer. Lighting designer Kate Ducey showed a great understanding of the play by bringing up dramatic light in the focal moments of the action, otherwise dropping the intensity into more muted lighting sets that still did the nuts-and-bolts work of lighting every scene correctly. She did excellent work with the Vortex’s state-of-the-art lighting grid and the custom-built grid under the bath-house floor beams. Ducey also created a memorable lighting design for Paper Chairs’ Poor Herman last spring.

The costume design by Jenny Hanna-Chambers seemed period-correct. The garments were well designed, with complex and varied ornamental designs and cutting. The costumes alone gave the play yet another dimension of appreciation.

Complicated electrical systems tend to have problems without a good electrical technician. The Drowning Girls has a very good one in the redoubtable, go-to Sadie Langenkamp.

The sound design by Blake Addyson served well the needs of the play.Especially effective were the low, throbbing rhythms in the initial scenes. They created an immediate atmosphere of charnel house foreboding.  Very well done.

The Drowning Girls is recommended for all adult audiences with interests in murder mysteries, women’s status in Edwardian times, and technical theatre issues.  All audiences will enjoy the strong, virtuosic acting throughout.

Click to view the program sheet for The Drowning Girls

Dates: Sept 30 - Oct 16, 2016
Run Time: One hour. No Intermission.
We believe in accessible art. For all.
ACCESSIBLE ART means... SLIDING SCALE Ticket Prices with FREE TICKETS AVAILABLE at EVERY PERFORMANCE as part of our new PAY-IT-FORWARD ticketing.
THE PAY-IT-FORWARD MODEL:
Free tickets are available for anyone who wants or needs them. No shame. No judgement. No questions asked.
In addition, tickets with donation amounts attached are available for those who can afford to fiscally support the event and the artists involved.
Theatre costs money to make but we never want that to be a barrier. Our art only is only complete when we have an audience with whom to share it. We do it for you.

Please arrive at The VORTEX at least 30 minutes prior to showtime to pick up your tickets at The Box Office.

The Butterfly Bar @ The VORTEX is open nightly 5 pm - Midnight, 1am on Saturdays.
Full bar with handcrafted specialty cocktails, local beers, and our famous sangria.
butterflybaraustin.com 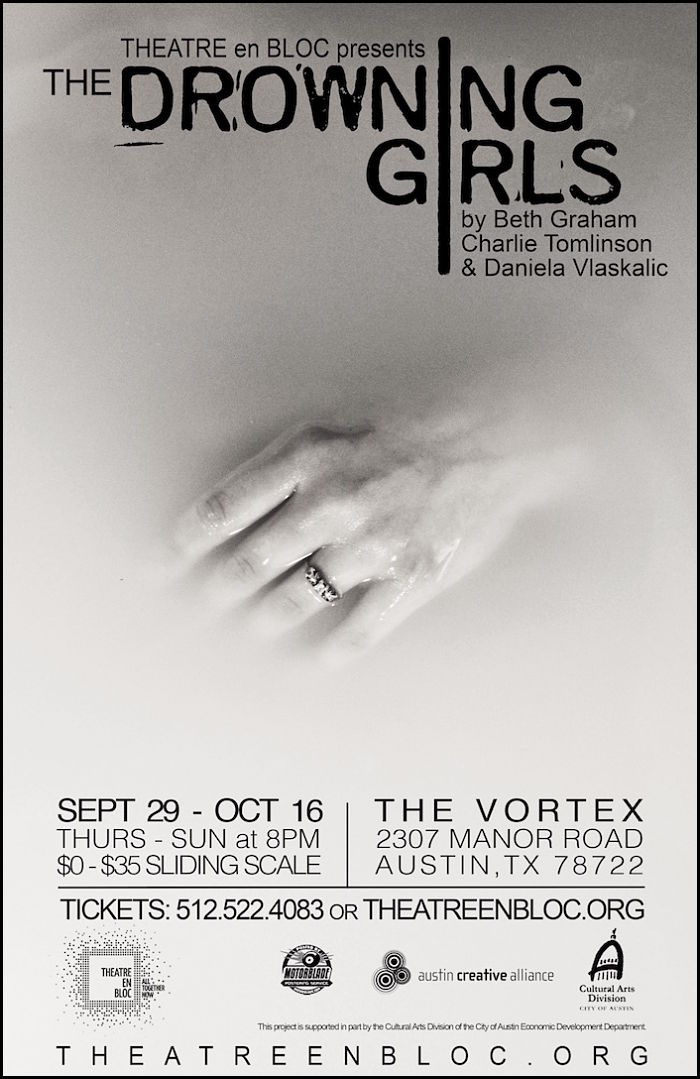