Review: Noises Off by Way Off Broadway Community Players
by Michael Meigs

The Way Off Broadway Community Players in Leander are celebrating their spacious new locale by turning the theatre inside out with laughter.  Literally. 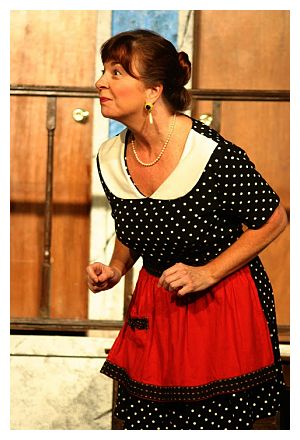 Michael Frayn's Noises Off is a lively amusement that pokes good-hearted fun at the conventions of the stage, starting with the most basic one: the agreement that we in the audience will accept you, the actors, as the characters that you are pretending to represent.  You settle into your comfortable seat in the new WOBCP's wide and spacious new auditorium and accept the silly business of housekeeper Mrs. Clackett's exposition with the telephone and the newspapers and the sardines.

At that point, if you had studied the miniscule print in the rear pages of the program, you might have been puzzled by a whole second set of credits, ads, bios and thank-yous for the production Nothing On by Robin Housemonger.  It becomes clear pretty quickly that that title covers, barely, one of those sweetly naughty brainless farces stereotypical of middle class English theatre circuits -- a play with disguises, mistaken identities, a burglar, slamming doors, and a sweet little bit of crumpet who scampers around in her scanties.  Is that what we're seeing?

Yes, and no.  Playwright Michael Frayne takes that concept and spins it.  A patient, aggrieved voice from the house cuts Mrs. Clackett's chatter short.  Lloyd Dallas strides up to the edge of the stage.  He sets Dotty Ottley straight about the sequence of business on stage, heaves a sigh and asks her to do it again.  Ottley has stage experience but appears never to have played anything but variations on the same character, according to the program (she played "Mrs. Hackett, Britain's most famous lollipop lady ('ooh, I can't 'ardly 'old me lolly up!")).  This is a late night rehearsal of a fourth-rate play by a third-rate touring company.  We meet other members of the cast as the action of this bit of froth shudders along, late at night, to the more and more comic exasperation of director Dallas.

Then Frayn tops that mischief, twice!  At intermission, to the recorded strains of Tchaikovsky, we are treated to the sight of the stage crew disconnecting sections of Russell Wiseman's impressive box set, turning the concept inside out and the set back-to-front, so that Act II shows us actors and crew backstage weeks later in a provincial town preparing for the curtain and then playing that same inane scene beyond the set. 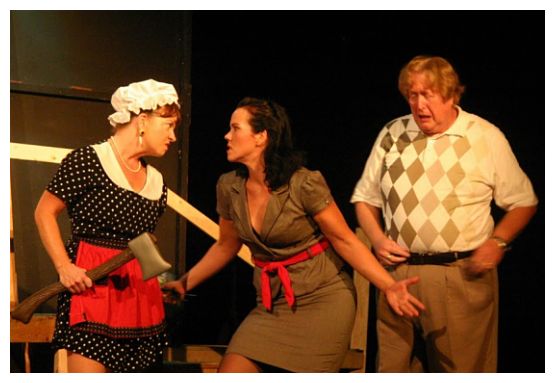 Emotions are high and farcical confusion is everywhere as the now familiar figures of this oddball cast battle one another in semi-silence.  It's a
precisely performed and choreographed madness, similar to the wild mute escapades in the 1920s comedies of Harold Lloyd or Buster Keaton, even funnier because of the desperate desire not to interrupt the play half-glimpsed through the windows of the set.  The show must go on!

For Act III the crew moves that towering set back around, reconstitutes the many-doored dual-level playing space, and Frayn treats us to the spectacle of yet another run of that first-act scene, this time in live performance with everything going comically wrong.  Our cast improvises madly, provoking more and laughter. It's a lot of fun watching actors acting out the worst nightmares of actors.  I couldn't help recalling Noel Coward's urbanely mocking cabaret song Why Must The Show Go On? 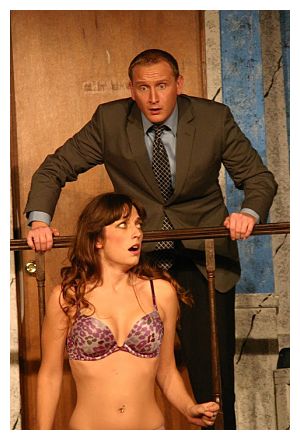 Co-directors Russell L. Wiseman and Tracy Cathy found engaging and clever actors for this cast.  Kim Rubin has an elfin cockiness and a wonderfully expressive face as she plays the hopeless Dotty Otley playing the hapless Mrs. Clackett the housekeeper.  Ryan Chody has the earnest-but-thick-young-man role (as Gary LeJeune playing Roger Tramplemain the lecherous real estate agent) and Merry Katherine Roberts is a droll and attractive bit of crumpet (spacey, contact-lens-losing Brooke Ashton playing the ingénue role of Vicki).  You see how complicated all this is?  Be reassured, however -- it plays as fast as a dynamite fuse in a Warner Brothers cartoon and it's just as amusing.

By pushing the comedy beyond the conventional set Frayne brings in theatre techs both imagined and real, reminding us just how complicated it is to deliver all this apparently effortless illusion.  Kerchief-wearing Caitlin Sullivan creates in Poppy Norton-Taylor the epitome of all those worried, mistreated stage managers who try to keep these mad performers on track.

Frayn's delight in lampooning the role of the director is evident, for the imaginary Lloyd Dallas has all the comic traits of authority -- he's an autocrat who would rather be directing Richard III, a lech who gets into woman trouble and a lush who absconds with the bottle everyone is trying to hide from the burglar (or that is, the gone-to-seed actor Selsdon Mowbray playing the burglar, played in turn by real-life WOBCP player Paul Rubin, married to Mrs Clackett -- no, to Dotty -- no, to Kim Rubin, the first person on stage and the first in the cast to receive congratulations from this writer, above).

AND -- just to let the cat out of the thespian bag, showing you an extra layer of comic confusion -- George Spelvin, playing the imaginary director, doesn't exist.  "George Spelvin" is a traditional pseudonym dating back in American theatre to the late 19th century, used in this whirling comedy by Russell L. Wiseman, director, who happily took the opportunity to make fun of all directors, himself included. 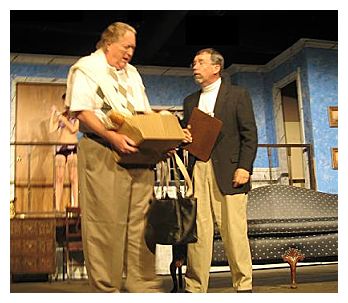 Special thanks to Hanna Haide, who invited me out to the spacious new theatre located behind Smoky Mo's on FM 2243 in Leander, and to Ed Trujillo, who gave me the tour and commentary as the company ramped up for dress rehearsal.  The company may be way off Broadway, but they are delivering rousing entertainment for the good people of Leander and theatre buffs who can zing out there from Austin in a scant half hour.  Congratulations to all!

Noises Off
by Michael Frayne
Way Off Broadway Community Players 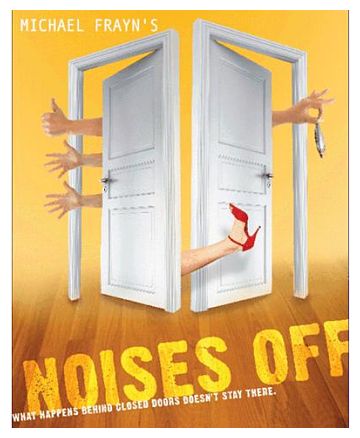