Marie Antoinette by David Adjmi presents the events of the title character's life with historical accuracy.  The play is not what anyone would call a historical play, however.  It is a biographical work focusing on almost exclusively for the French queen's death, not on her life.  Capital T Theatre’s extremely well-designed and performed production at the Off-Center treats Adjmi’s play well and brings some literary justice to Marie Antoinette.

The show provides an intense, unwavering gaze at Marie’s life.  The set by Leslie Turner is spare, with props moved on and off by the actors.  Objects are not period but rather have 18th century period inflections.  The same may be said of Talena Martinez’s costumes.  Together the two design fields give a consistent and very postmodern look to the production.  A very wide roll of fabric or paper is on a warehouse roll elevated upstage center.  The material has a simple, vaguely 18th century pattern on it.  The scenes play right over and across it; at one point, Marie, played by Indigo Rael, says “I made that pattern.”  The fabric roll is the symbolic timeline of her life. Periodically the actors unroll more of the material, bunching it downstage center.  At the finale with the scaffold they pull the last of the fabric off the roll.

The brilliantly talented Indigo Rael portrays Marie Antoinette.  With the play's unrelenting focus on her character, her lead is necessarily strong.  No problem.  She is clear, forceful in her presentation, and at the same time nuanced. Rael portrays one trapped by her era and ultimately destroyed by it. Marie Antoinette endured the curse of living in exciting times. 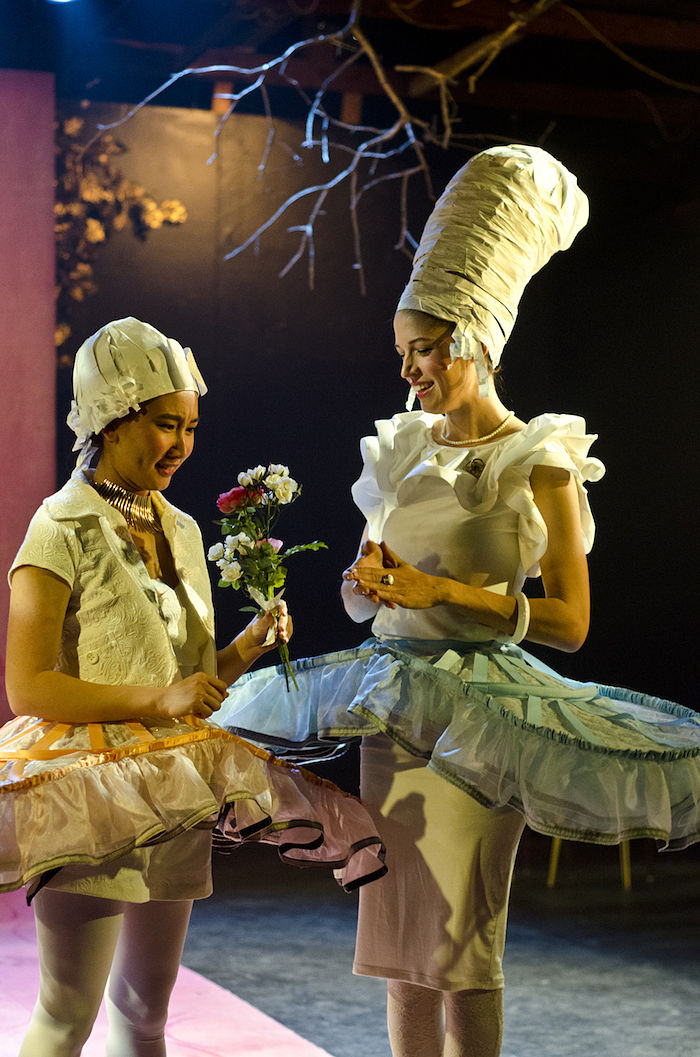 Marie, a Hapsburg, was born into the top flakes of the Austro-Hungarian upper crust, given a finishing-school education in the Schönbrunn Palace in Vienna and then shipped as a brood mare to Versailles near Paris in a dynastic arrangement, wife of Louis XVI.  Marie was the brains of the family, the Bourbon germ plasm having gone rancid a generation or two earlier.  As was the custom, Marie was effectively boarded up in the palace with royal toys, but she had no real power and made no decisions for France. She could give orders to the staff that rattled the tea service, but if she made a thoughtful policy statement about the realm, she was ignored.  So she gave up.  Hence her insensitive and well-known statement regarding the peasants' lack of bread. Playwright Adjmi takes it out of context and makes it a throwaway line. Marie was not responsible for the Bourbons' long term abuse of the lower classes, but she was blamed for it and took the consequences.

In the play Marie finds her strength too late, engineering the failed escape from France with her family.  Her husband Louis XVI was of no use in the effort, and had to be led along, virtually by the hand.  Marie's moral crisis came earlier, when she decided to leave her husband but apparently changed her mind.

Ajmi’s play itself escapes the critical trap of many plays that depict a historical figure as not fitting into the milieu, becoming a character out of time. We've seen it often enough -- characters wrapped in 21st century values, knowledge, and belief systems presented as explanations for their conflicts with the value systems of earlier centuries.  Playwrights tie their texting software into knots trying to make these ideas believable. 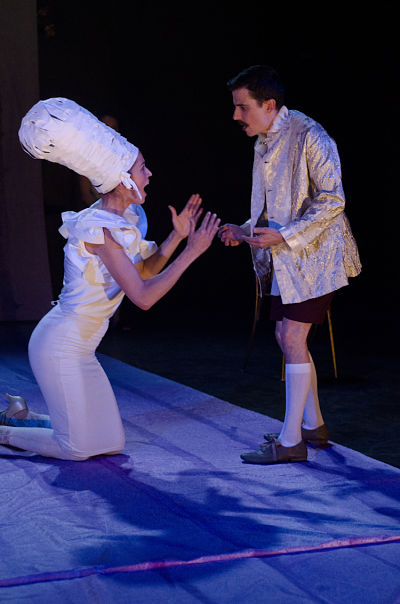 Ajmi glides past past the trap. Marie Antoinette finds enlightenment of a sort in philosophical discussion with a magical realist sheep that walks through a few scenes (adding to her credits, Rael announces loudly before the beginning of the show that she made the puppet sheep).  The sheep and Marie introduce to the play the contemporary philosophies of Rousseau, Diderot, and Voltaire. Isaac Newton is brought in from natural philosophy.  In the rise of rationality as a formulation of revolutionary governance, caring is deliberately discarded. The sheep asserts that it's all about power and power alone.  Marie insists to the end that the only alternative to Monarchy is The Deluge, and that American democracy, mentioned several times, is an experiment doomed to fail. Here we find a resolution, almost, in the ideas of the times, not outside of them.  Marie never recanted her upper class conceits, but the mob would have engulfed her even if she had. Overall, the play illuminates what may be the greatest irony in history, that revolutionary France tried to build on rationality as the means to fulfill human potential, but its only dynamic for change was the raving irrationality of the murderous mob. The result was the nation's ratcheting descent into Hell and rule by Napoleon.

Indigo Rael was not alone in offering a powerful performance.  The entire cast was notably strong. Karina Dominguez took a star turn in multiple roles, as did Claire Grasso.  Both these actors, while very clear, polished their characters with superb timing in movements and delivery.  Nicholas Saenz, with numerous film credits and fresh from FronteraFest’s And Still the Dead One Lay Moaning by Anthony Bromberg, gave rich character performances as Joseph of Austria and Mr. Sauce.  Nicholas Mills portrayed Antoinette’s husband, Louis XVI.  Mills’ and Saenz’ characters, while secondary to the play, seemed  somewhat underwritten by the playwright, and this lower energy of the script makes the actors’ accomplishments that much more commendable.

Matt Frazier did yeoman work as the animator and voice of the sheep.  Uyen-Anh Dang and Delanté Keys were properly royal as courtiers and functionaries.  Nine year-old Kristin Torres played the Dauphin flawlessly.  The entire cast was exceptionally crisp in their entrances and exits, and often these were only to add or remove props or costume pieces to the characters on stage, or to correct minor stage bobbles.  This advanced blocking, done so well, is a tribute to director Rosalind Faires, of the highly talented Austin Faires family. Faires’ accomplishment stands on its own, however, and shows a commitment to the nuts and bolts of directing done right.  Kudos. 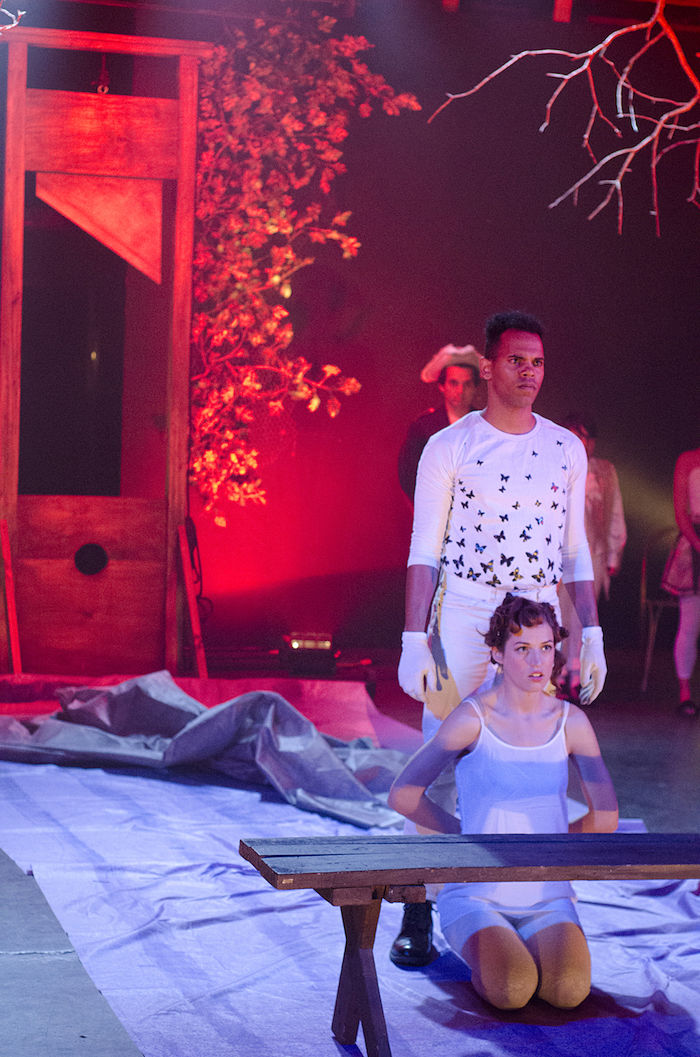 Lighting Designer Patrick Anthony and Sound Designer Lowell Bartholomee changed the scenes on the thrust stage without the aid of a curtain.  Bartholomee’s sounds, with their storms, battles, and riots, were especially effective in creating the world of the play.  Indigo Rael’s interactive puppet sheep, credited earlier, truly gave a bizarre tone to the magical realist component of the play. And who knows where the four-foot interactive hairstyle on Marie came from?  The designers, working together with each other and the virtuosic cast and director, have created a memorable production of interest to anyone who likes theatre.

Marie Antoinette by David Ajmi runs until March 20th at the Off-Center in east Austin.