Oscar Wilde wrote and proclaimed almost to tedious extent about aestheticism in his early career as writer, lecturer and journalist, and he was so well known for his extravagance and opinions that Gilbert & Sullivan had caricatured him in their 1881 operetta Patience.  Wilde wrote a couple of dramatic tragedies in the 1880s that came to nothing, and in 1891 he wrote Salomé, in French.  The Lord Chamberlain put a stop to Sara Bernhardt's plan to stage it in London on the grounds that Biblical characters should not be depicted onstage.

In summer of 1891 on holiday in the north country Wilde sat down and produced the first of four society plays that were produced in London in the first half of the 1890's.  Lady Windermere's Fan was  a huge success, almost certainly because he endowed his characters with the wit, epigrams and repartee for which he himself was famous.  These are scenes and domestic dilemmas of the idle rich, most of whom produce nothing but words.  Wilde gleefully undermines the very society that lionized him. His stereotypes as are vivid as those who later populated P.G. Wodehouse's novels, and they're equally, mindlessly devoted to their status quo as the 1%.  Any one of them would serve as a charming dinner companion for a whole evening. 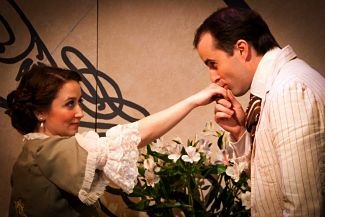 The structure of Lady Windermere's Fan is that of the "well-made play" typical of 19th century drama, in which a a dramatic plot is driven by secrets that are  gradually brought to light, often through the device of a letter or object that reveals hidden information.  This is a plot turn as old as the theatre itself, of course, and no doubt those London audiences in evening clothes were agreeably pleased when the sweet young Lady Windermere's fan, a present from her husband of two years, turns up in the private quarters of the sleekly caddish Lord Darlington.  Wilde artfully turns the discovery into an opportunity for the outsider, Mrs. Erling of dubious past, to intervene and cover for the ingénue.  His clever turn is that the play does not end in the expected revelation; instead, there are two mirrored secrets that are successfully covered up and an identity that is revealed to the audience but not to the character most closely concerned by it.

If you're a follower of Austin Playhouse, you'll feel right at home with most of the cast.  Benjamin Summers is the earnest young Lord Windermere who seems at first to be carrying on an illicit liaison; Jason Newman is the smoothly amoral Lord Darlington.  Just two years ago these two played similarly twinned roles as Jack Worthing and Algernon Moncrieff in Wilde's The Importance of Being Earnest.

Cyndi Williams is thoroughly at home in the grande dame role of the Duchess of Berwick; Ben Wolfe and Christopher Loveless play glib loitering aristocrats; and the redoubtable comic Michael Stewart, newly and elegantly bearded, is the old duffer Lord Augustus, the genial goodhearted fool of the piece.

Director Lara Toner has added to that reliable team the actresses who appear in the poster photo done by Christopher Loveless. 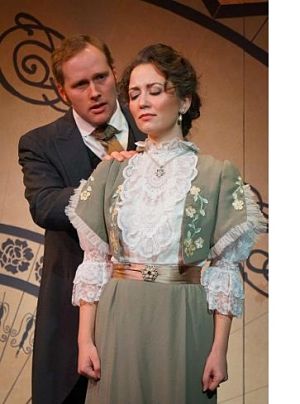 Claire Ludwig as the much deceived Lady Windermere has a sweet, bird-like intensity and over the course of her husband's blundering but well-intended prevarications she becomes touchingly desperate. One simply wants to give her a big hug and reassure her that her hubby isn't wicked; he's just clueless.

Suzanne Balling is her nemesis Mrs. Erling, a fallen woman in certain measure, who is attempting to re-enter high society after some twenty years of hiding abroad.  Balling displays a confident and shameless coquettishness quite unlike many of her previous much-applauded roles (Medea at City Theatre, for example, the Indian mystic Maryama for Different Stages, and Doris the desperate teacher in Dead White Males done by Sustainable Theatre).

The tension between these two is the heart of the action.  The younger woman hears of the older one and furiously refuses to receive her.  Her husband overrides her objections and thereby impels a series of desperate measures that put the two women into ever closer contact. 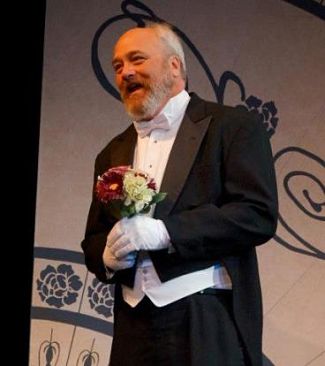 Wilde's aphorisms, bon mots and contradictions surprise and divert throughout.  Will you have a sudden moment of recognition upon hearing Newman as Lord Darlington comment that a cynic is "a man who knows the price of everything and the value of nothing"?  Or perhaps be amused to hear Ben Wolfe as Cecil Graham riposte, "And a sentimentalist, my dear Darlington, is a man who sees an absurd value in everything, and doesn’t know the market price of any single thing"?  There is so much brainy wit here that at times I regretted the director's choice to keep the dialogue rattling forward like the Schlitterbahn; I would have liked to have some of the most memorable and insightful comments float deliciously for a moment in my ears before I had to attend to quibbles and rejoinders.

Buffy Manners' costumes for this period piece were as clever and delicious as Amy's Ice Creams.  Particular praise to her for the intricate, exceptional gowns done for Claire Ludwig.  Suzanne Balling's costumes were appropriately vivid and assertive for the mysterious Mrs. Erling. 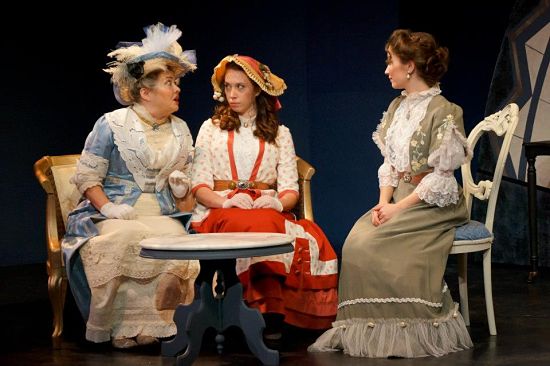 Lara Toner's imaginative set is engagingly non-representational and adaptable.  Act One plays on a minimally furnished stage backed by an enormous and gracefully rendered cream-colored fan, some thirty feet wide and twelve feet tall. The cast ceremoniously and elegantly transforms that set piece for subsequent scene changes, separating its components and revolving them into new configurations.  The Highland Mall space does not have the fine appointments of the planned new home for the Playhouse, but its high ceilings and wide stage have profitably challenged the technical staff.  Other Desert Cities had a fine California sheen to its to the stone ranch house designed by Don Toner and Patrick Crowley; this set by Lara Toner has a subdued playfulness; and the upcoming Noises Off by Michael Frayn features a gigantic revolving theatre-within-a-theatre that should be a wonderful technical toy.

Two quibbles: In the first act there were several dialogues in which one or the other actor spoke upstage directly to a counterpart, turned away from the audience, when usual stage practice would have been easy to apply, 'cheating' slightly so we could watch faces (Cyndi Williams was at ease with this technique).  Bryan Schneider's sound design assaulted ears before the opening and between the acts with galumphing waltzes and ball music that sounded heavily Viennese. European aristocracy was not all of a piece, and the music of the London of Queen Victoria was probably more likely to have been light opera, piano pieces and chorales.

Review by Jillian Owens in the Austin Chronicle, March 21 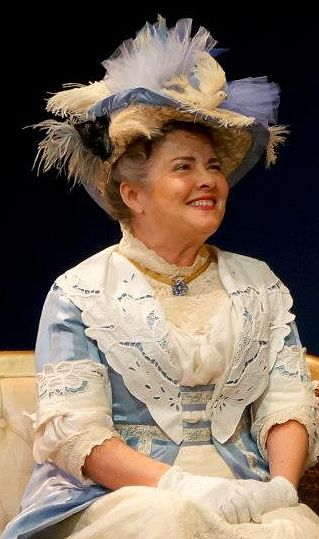 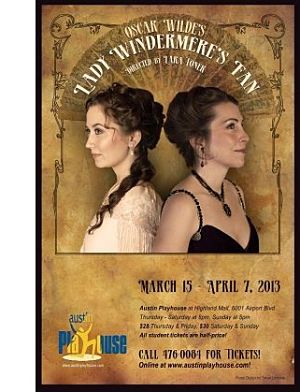