Review: And Then There Were None by Austin Playhouse
by Michael Meigs

You've arrived at an estate on an otherwise uninhabited island somewhere off the English coast along with nine strangers.  Your host hasn't shown up.  The weather has been steadily deteriorating.  You spend the first hours tentatively making the acquaintance of this odd collection of mostly upper middle class individuals.  The polite tedium is shattered when a voice from the next room sternly names each of you and accuses each of homicide.

Ten lines of doggerel are framed above the fireplace, jovial descriptions of death.  Ten little Indian figures sit on the mantlepiece. Unnerving, what?

Then the storm closes in over the wild seascape, isolating you for real.  There's no telephone.  And an unseen homicidal maniac begins killing.  A poisoned drink; a hypodermic; an bloodied ax; a fall over a precipice into the sea.  Who's next?  And who's doing this? 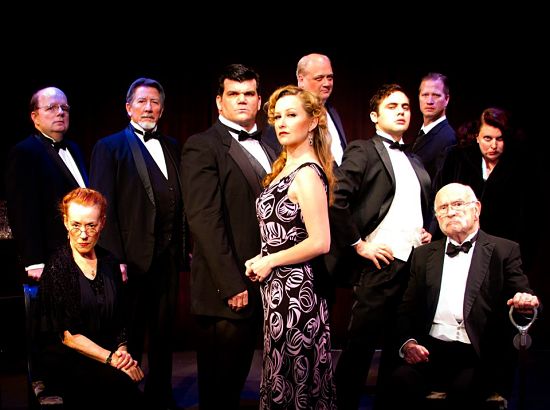 Dame Agatha Christie built a huge following in the first half of the twentieth century for her murder mysteries -- not only those featuring Miss Marple or Hercule Poirot, but also a series of cleverly plotted murder puzzles.  She didn't invent the oh-so-British detective story, but she came close to perfecting that peculiar form.

You don't see many of her novels in the United States any more but she remains popular in Europe.  I assume that the Brits are still devotees; I know that the paperback racks in Germany are full of translations of her books. 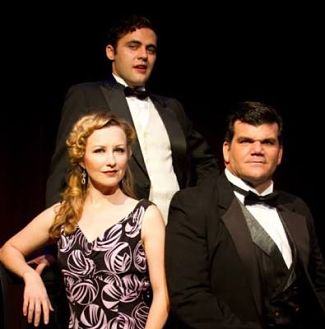 The typical Christie murder puzzle is a contest with the reader, a bit like a crossword puzzle -- of the sort that the New York Times used to feature and perhaps the Times of London still does.  You curl up in your comfortable armchair by the fire with your text and your clues (oops, 'clews') and pick your favorite suspect.  Or you get a ticket to the Austin Playhouse production playing at Highland Mall until December 22 and live Christie's menacing world through six scenes in three acts over one accelerating, menacing weekend.

Director Laura Toner does a pretty good job of differentiating them and moving them around, even though with a cast of that size the relatively bare single set does feel a bit like the waiting room at Victoria station.  Suddenly a voice of doom thunders from the next room, rapidly delivering a list of names and accusations.  The characters freeze in place about the stage.  This occurs before we've quite sorted out this menagerie, so we're initially confused by the charges that turn out to have been delivered by a platter on the grammophone. 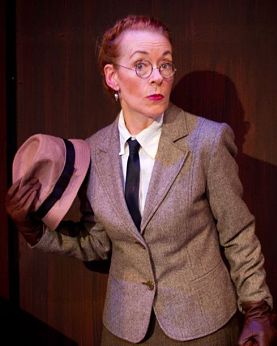 How did they all get here in the first place?  Exposition is ample and talky.  Each was misled or enticed into accepting the invitation although the identity of the host (or employer) wasn't entirely clear.  If we weren't willing to suspend belief and accept this variation of the old locked-room puzzle, we'd think them a flock of silly geese.  And we happily swallow the convention that shortly before receiving the fatal dose/blow/shot/chop/push, each character is going to deliver a revelation, perhaps a confession, that  elucidates the motivation of the invisible justicer.

Characterizations by Dame Agatha are somewhat perfunctory, done in a sort of shorthand, but the Playhouse cast manages to fill most of them out with convincing detail.

Bernadette Nason is suitably severe as the censorious old maid but she undermines that characterization when she yields to the temptation to resort to some comic mugging.

Hildreth England's the appealing ingénue buffeted by these progressing revelations, and Michael Stuart's very much at home as the bluff, loud and hearty policeman.  While stakes mount and suspicions intensify, his clashes with the equally self-confident South African military officer (Brian Coughlin) raise the tone with their sharpness and verbal intensity. 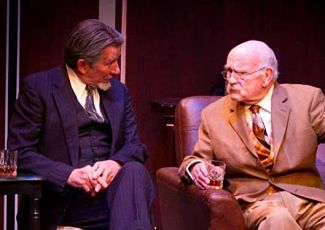 Dirk van Allen as the general and Steve Shearer sleepwalk through much of the action, while Craig Kanne as the neurologist is intentionally something of a flibberty nervous mess.  Christopher Loveless is an expressionless major domo with extremely well phrased, articulate speech; Laura Walberg as his wife the comic cook is often unintelligible in her rush of lower-class gabble.  Producing artistic director Don Toner does a cameo walkon in the first act as Fred the boatman.

In the comfortable and much larger playing space on the lower level of Highland Mall the Austin Playhouse has enjoyed the opportunity to install sets of striking design.  This one by Patrick and Holly Crowley is relatively stark but nevertheless impressive.  Wood paneling is represented throughout, doors left and right are subtly decorated with silvery doorframes, and an elegant Art Deco metallic round window at center stage surrounds the French door exiting to the terrace and garden.  Costumes by Buffy Manners range from the evening-dress correctness to Nason's smart outdoorsy tweeds to the policeman's gorgeously tasteless gaudy. 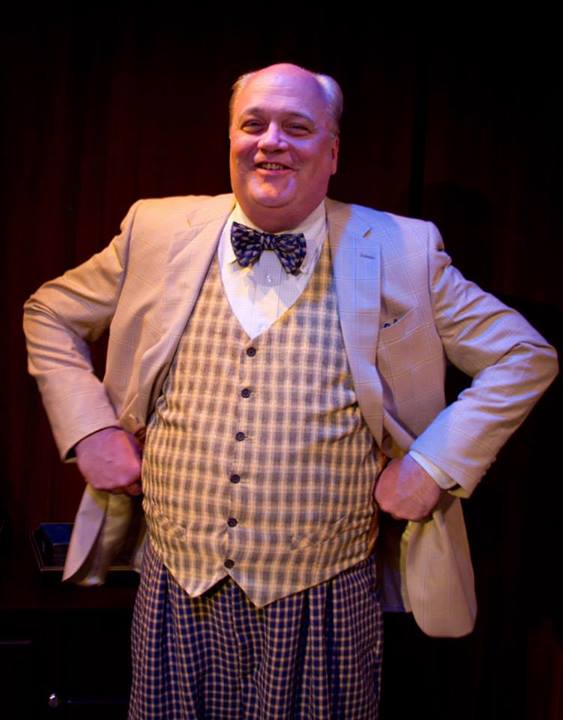 In the 1960s and 1970s Good Housekeeping magazine used to run a helpful monthly listing of current films (meaning cinema; at that time there was no real alternative access to movies).  Among their standard counsels to middle America was the notation "good of type,"  meaning "nothing objectionable, sturdily constructed, appropriately entertaining."  And Then There Were None is exactly that: a reassuring entertainment where you can metaphorically curl up in an armchair with an audience and match wits with the Queen of Mysteries.

But be advised: she was a sharp-witted player, tricky and never hesitant to use red herrings or outright deceptions.  Your emotions and allegiances will be manipulated; the guilty, the dead, innocent and the slippery living will be practically impossible to tell apart.

And Then There Were None
by Agatha Christie
Austin Playhouse 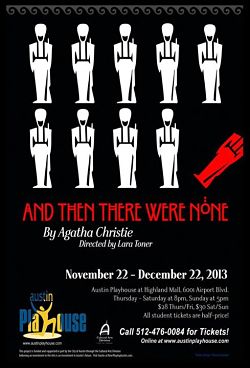