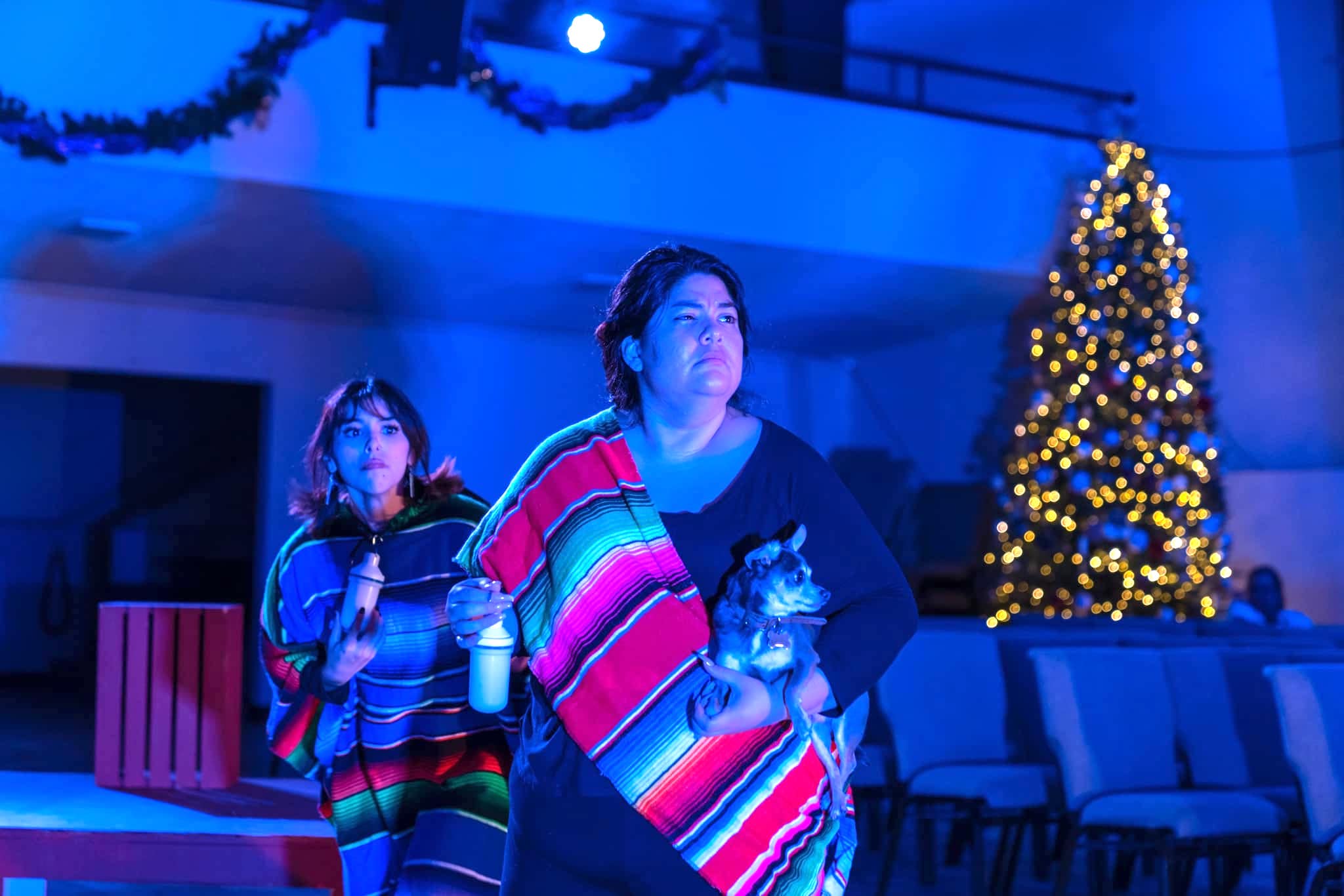 Almost all of us in the United States are deeply embedded in winter holiday traditions that we first encountered as children. Most typically, the church christmas pageant walking through the Biblical recital of the Christmas story or, for those less religious, Dickens' Christmas Carol, that enduring, sentimental admonition to love others. Both follow familiar, well-defined scripts.

La Pastorela, a Christmas tradition deeply rooted in Mexico, instead offers variations of a basic scenario, the shepherds' travel to Belén (Bethlehem) to encounter the newborn king. The acting troupe and director are free to formulate or improvise the script, an essential part of which is the conflict when wicked forces seek to block that holy journey. Luzbelle (Satan) and Luzbelle's minions lie, mislead, set traps and distractions, doing their very best to dissuade the shepherds. Since this is a Christmas play, the wicked fail and the simple shepherds eventually arrive at the stable to encounter the king.

Like other pastorela plays I've attended, Teatro Audaz's version is lively, comic, and colorful, fun for all involved. Brizzo Torres and four youngsters greet the audience and promise great entertainment; Torres's powerful voice and her coy courting of the audience set the tone immediately. As for the action, playwright/director Anolisa Leos-García dreamed up a trio of Gen Y shepherds, each with a distinct personality signaled by character name: Vanidad (she's so vain!), G-Lo (ever hungry), and Enfado (grumpy). Miranda Valdez-Williams as Vanity is clearly the leader of the group, loquacious and self-enamored, constantly staring into her smart phone and its brightly illuminated selfie light. 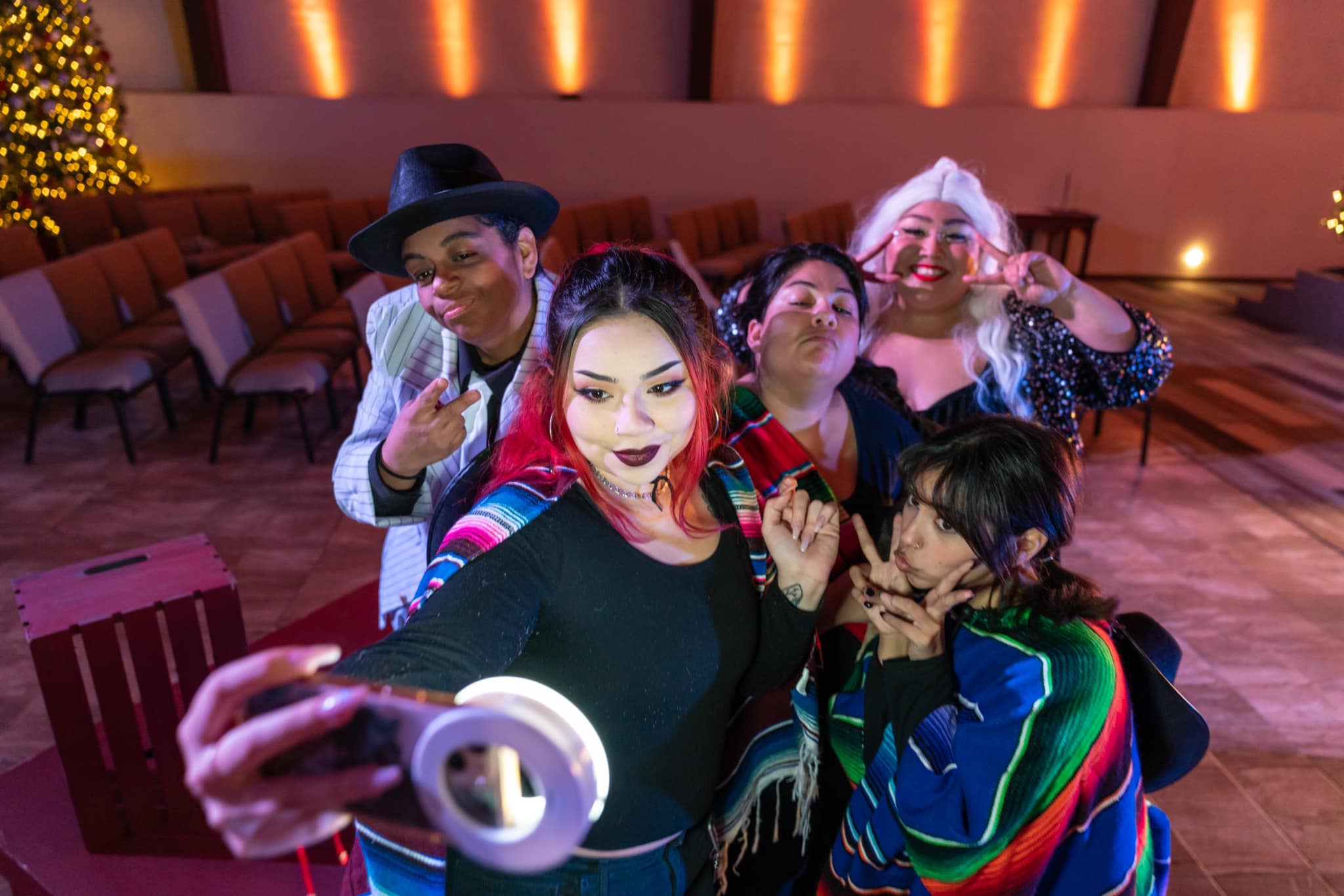 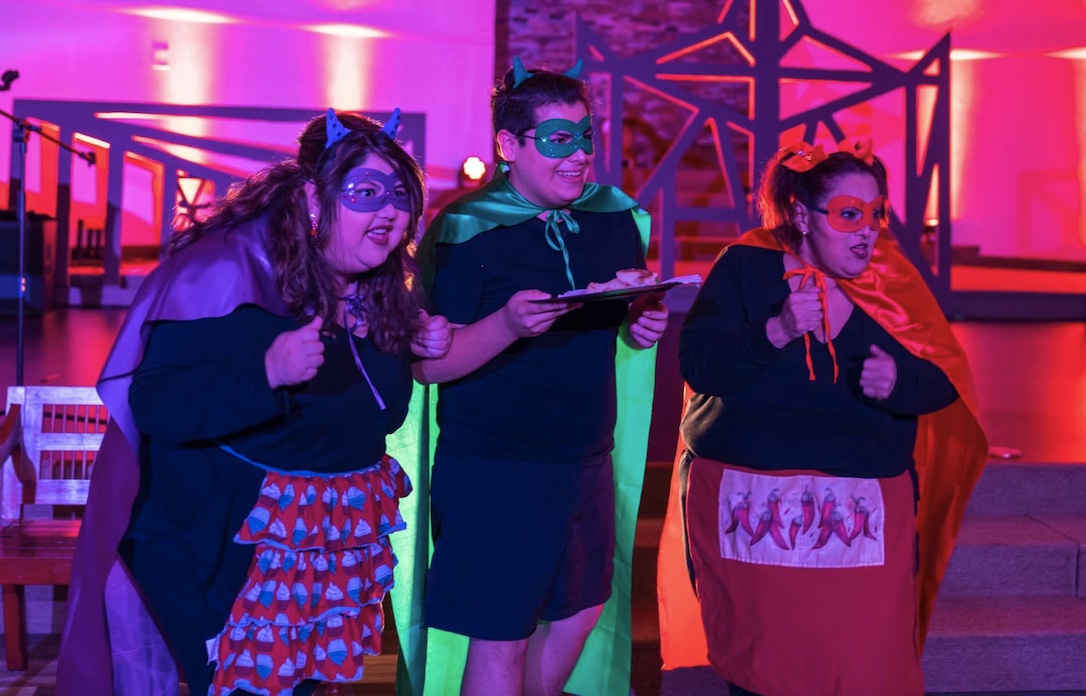 Their progress toward Belén is anything but direct, partly because they wander and circle around spectators in the lofty hall of the Woodlawn Pointe social center but, more to the point, because the three little devils (Anastasia Islas as Violencia Mysterioso (Mysterious Violence)), Jared Kanagusico (El Taquito Cansado (Weary Tiny Taco)), and Janie Saucedo (La Toxica (Poison)) do their best to obstruct the shepherds. None of the combatants is particularly clever, so each bout turns out to be a draw, especially when Archangel Miguel (Michael) intervenes in favor of the travelers. 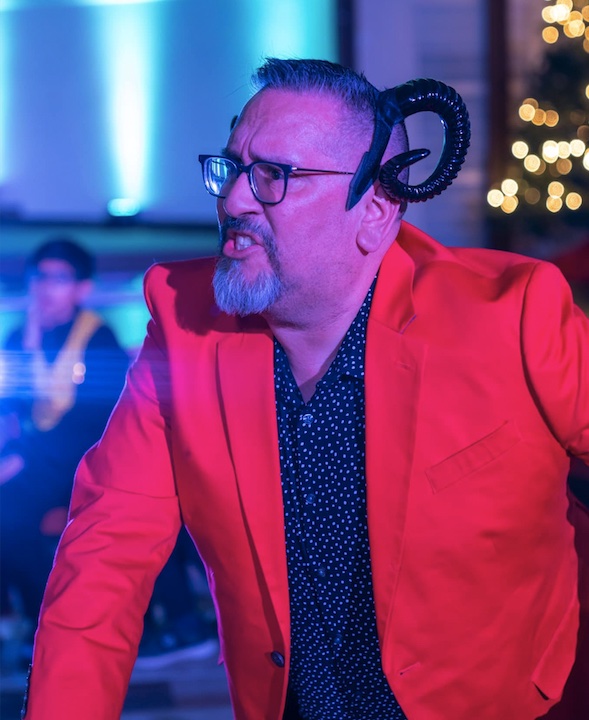 Standing high above the action in the windows behind the stage are the personifications of good and evil. Luzbelle (José de Hoyos) rants in his booming voice at the ineptitude of his devilish supporters; San Miguel (Angie Flores) cheers the shepherds onward, regularly joining them at crucial moments along their way. Luzbelle is in red and wears an impressive set of horns; San Miguel is in a voluminous white suit and fedora that would be the pride of any silent film comedian. The temptations of poisoned sweet pastries are avoided; individual rooms at the inn turn out to be prison cells but don't last for long. When Luzbelle declares that the time has come to fight, all six of the contestants start flailing about. 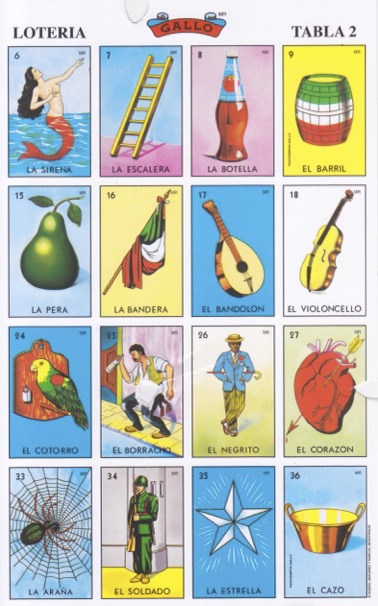 Not like that! Luzbelle informs them (and the audience) that this will be contest by lotería (Mexican bingo). All combatants receive a lotería card, and everyone in the audience holding a program has one as well (and if lucky, they've also gotten a page of stickers with which to mark the winning squares). Images on screens high on the wall reveal the succession of lucky images -- el corazón (the heart), el borracho (the drunk), la escalera (the ladder), etc. -- and Luzbelle (de Hoyos) circulates about the hall performing a terrifically amusing improvised commentary on the action.

Pierdan cuidado! (Don't worry, y'all!) The shepherds will get to cradleside, Christmas carols will be sung, and everyone will be invited to join cast and crew afterward for buñuelos and hot chocolate. Teatro Audaz's executive artistic director Laura T. Garza will wind up the performance by auctioning off a poster signed by all members of the cast, the proceeds to go to support the theatre company. 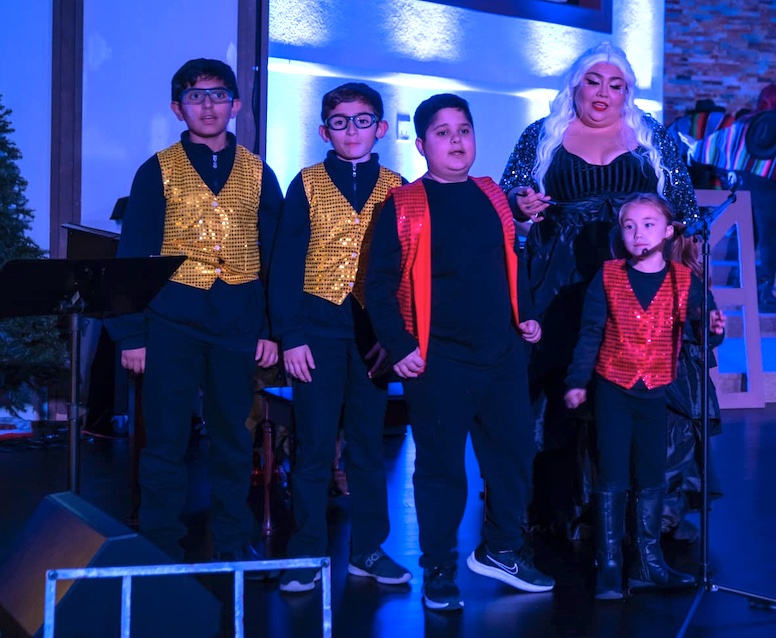 Teatro Audaz has become an important presence in San Antonio theatre, as indicated by its collaboration with The Public Theatre. Their Pastorela Audaz is performed principally in English, though with rich and amusing touches of Spanish, appropriate for the largely Tejano audience. Though La Pastorela with its exaggerations, slapstick, and over-the-top characterizations is usually intended for young audiences, on opening night the four enthusiastic young persons in the cast (Glory Monroe, Isaías Carlos Garza, and brothers Seth and William García) appeared to outnumber the youngsters in the audience, although that Monday was the first day of SAISD winter holidays. We can hope that more kids will have the opportunity to enjoy this version of a classic celebration; the grown-ups there were certainly pleased!

Click to view the Playbill program for La Pastorela Audaz 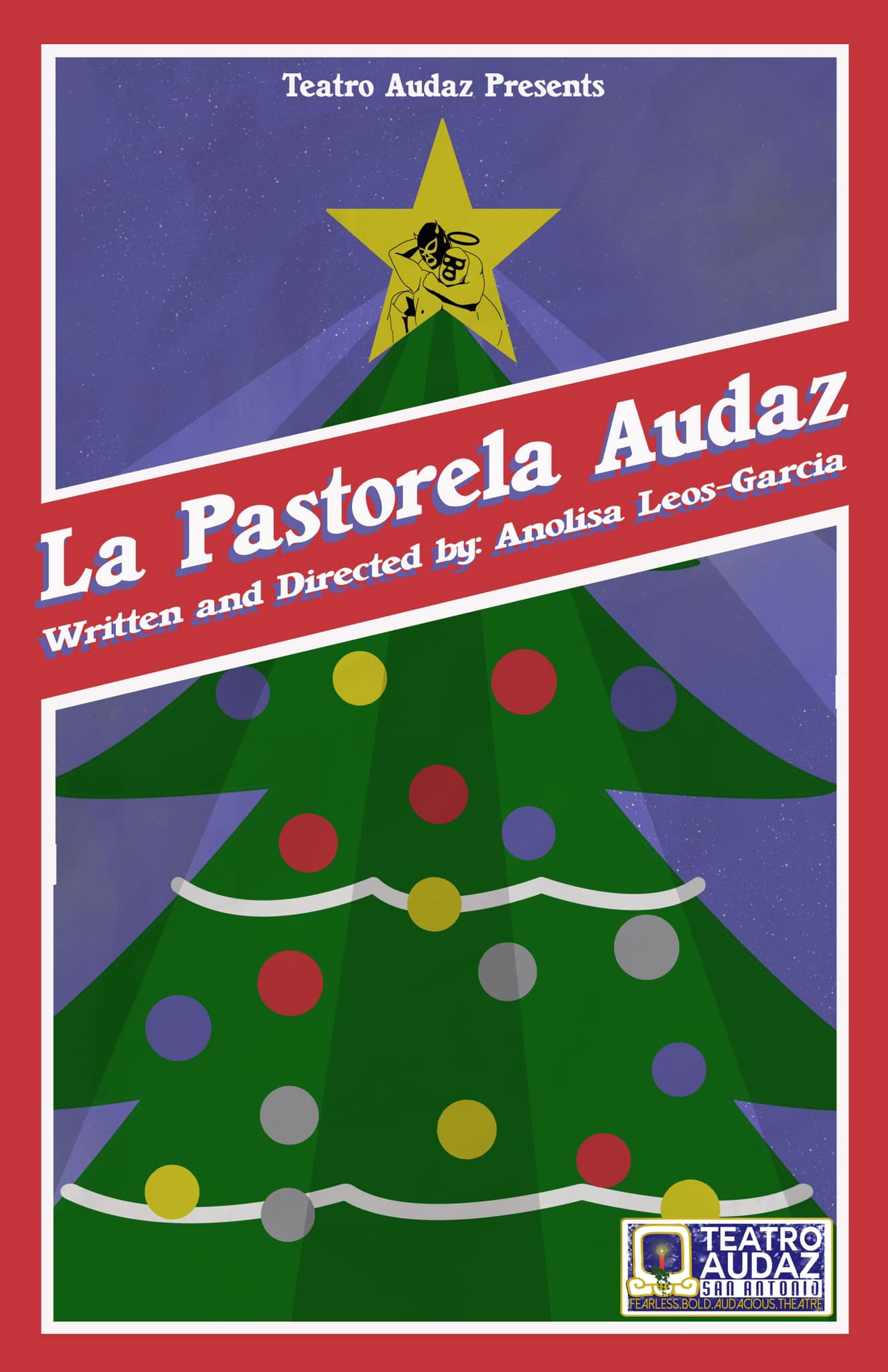