Review: The Gulf by Street Corner Arts
by Michael Meigs 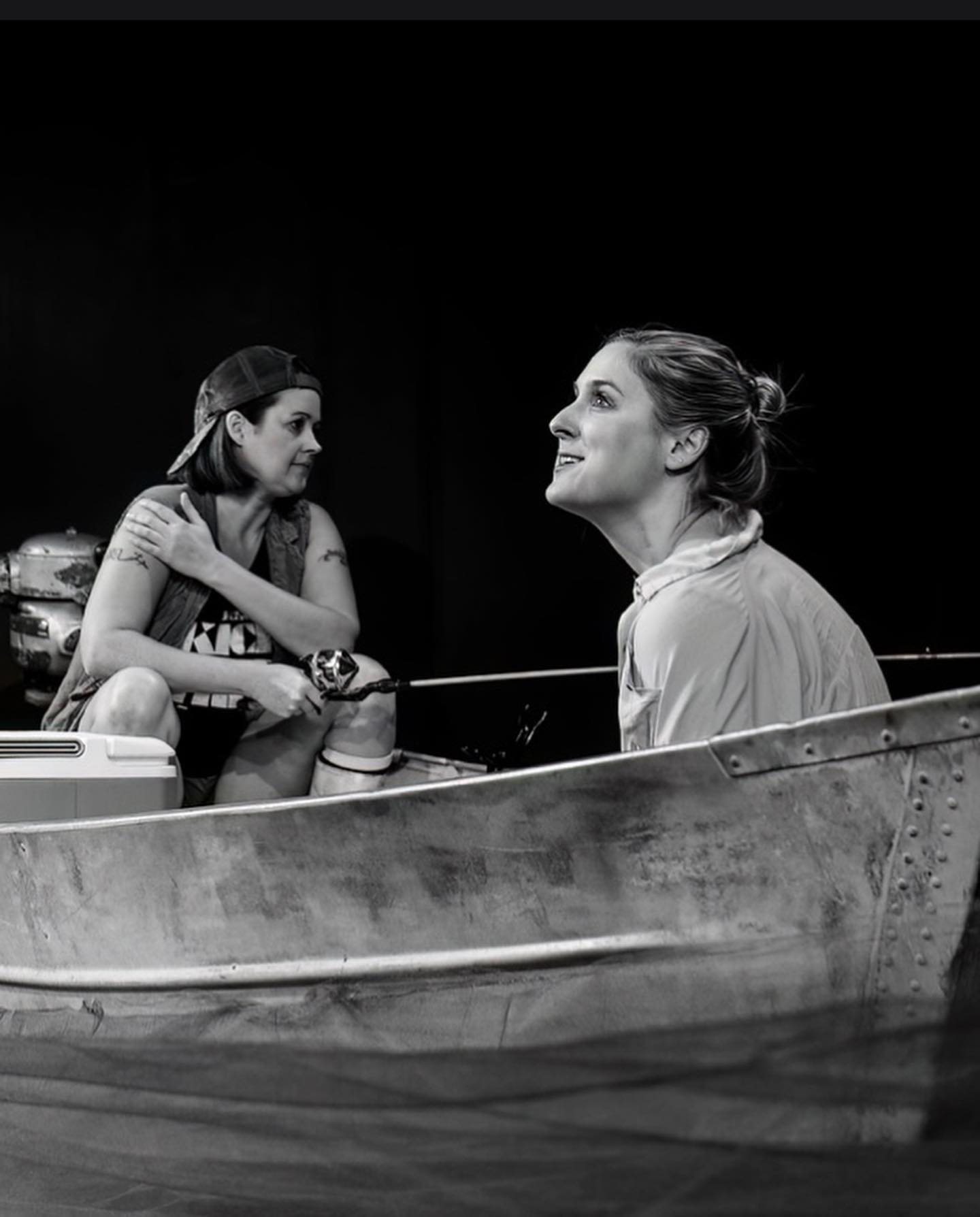 Two women. Together in a boat on a shallow bay in the Gulf of Mexico. Nobody else around. Another boat passes at high speed, and the women shout mocking defiance, yell bad advice, give them the finger.

No, this isn't a story of victimization. This seventy-five minutes delivers turbulence and a torment, but those are interior emotions. Playwright Audry Cefaly places her characters in the watery expanse of Mobile Bay or Florida's Redneck Riviera but leaves them confined within the boat, within their histories, within disappointments, and within their relationship. Obsessively talkative Betty jumps from one subject to another; stolid Kendra puts up with Betty's logorhea and scoffs at her half-formed plans to escape.

"I save lives!" Betty insists. (She's a bartender.) "You're stuck in that job at the water treatment plant!" 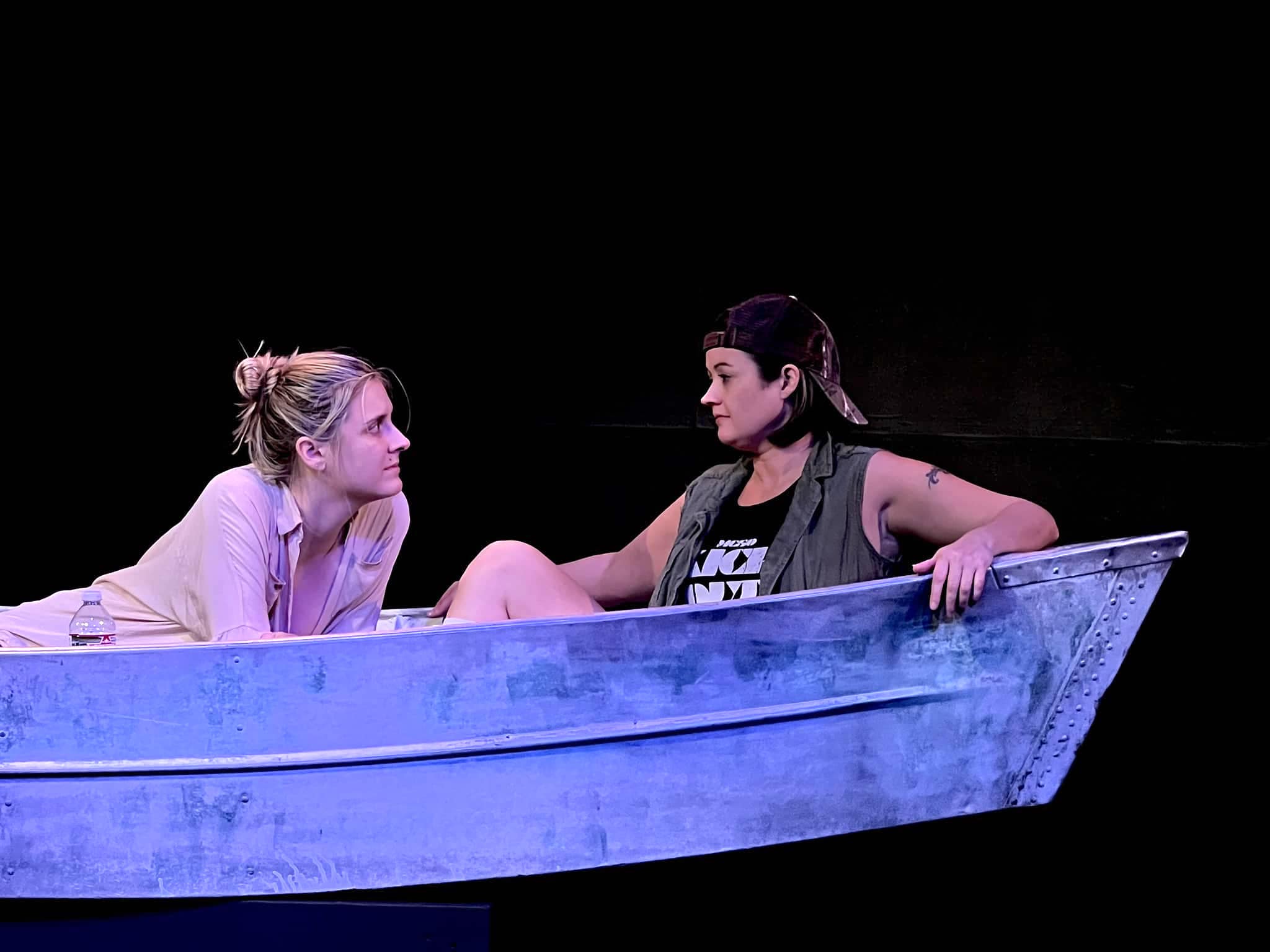 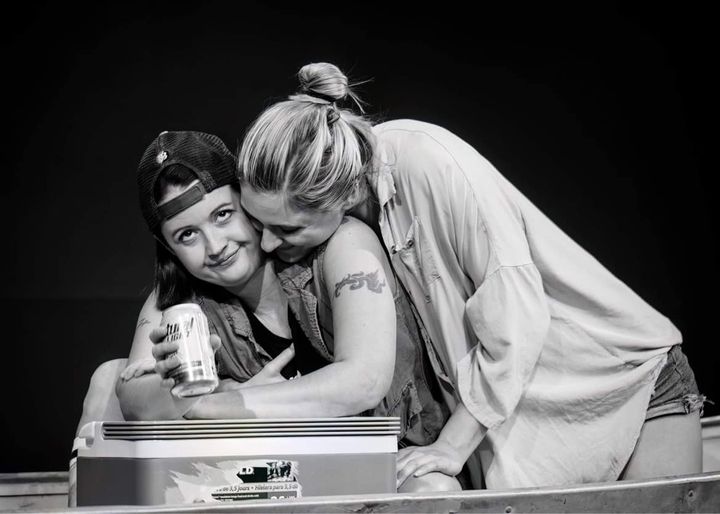 The Gulf, a Street Corner Arts production running at Austin's Hyde Park Theatre, is an extraordinary work. Cefaly's writing is vivid, sometimes wildly comic, often charged with emotion. With Betty's random stories and Kendra's reactions, the playwright engages us early; in the back-and-forth she eventually fills in their back stories, making the task of exposition look easy.

Director Carlo Lorenzo Garcia's simple but striking set and sound design provide depth to the concept. Shelby Gebhart's lighting reinforces the illusion with subtle changes that suggest the dappling of sunlight reflected from the water.

These are extraordinary women actors, both of whom I've followed for several years. I first saw Kelsey Mazak in 2015 when she played Emily, the lead, in Trinity Street Player's Our Town. Natalie Garcia came to Austin from Chicago in 2017 with her partner Carlo, the director, and portrayed the lead/narrator in Lilian Groag's The Magic Fire in early 2019. Natalie was a principal character in Filigree Theatre's Fefu and her Friends later that year, one of the very few productions I attended but did not review (which I greatly regret and for which I here apologize). 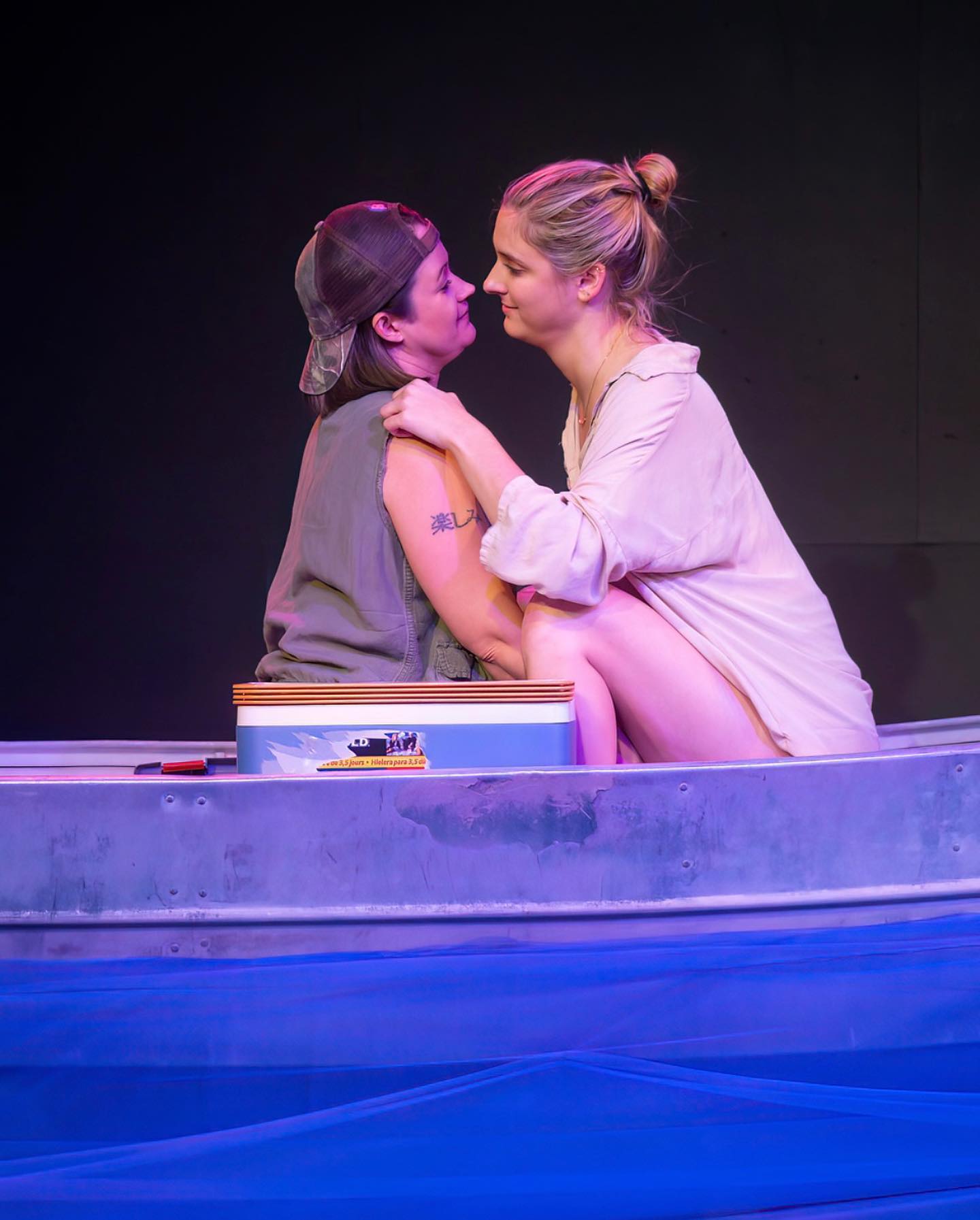 They've worked together before, which is evident as they explore the tensions and attractions of this relationship. There's exquisite timing as they do—superb pauses, sharp reactions, overlapping speech, unexpected modulations, all of which must have been carefully crafted by director and cast. 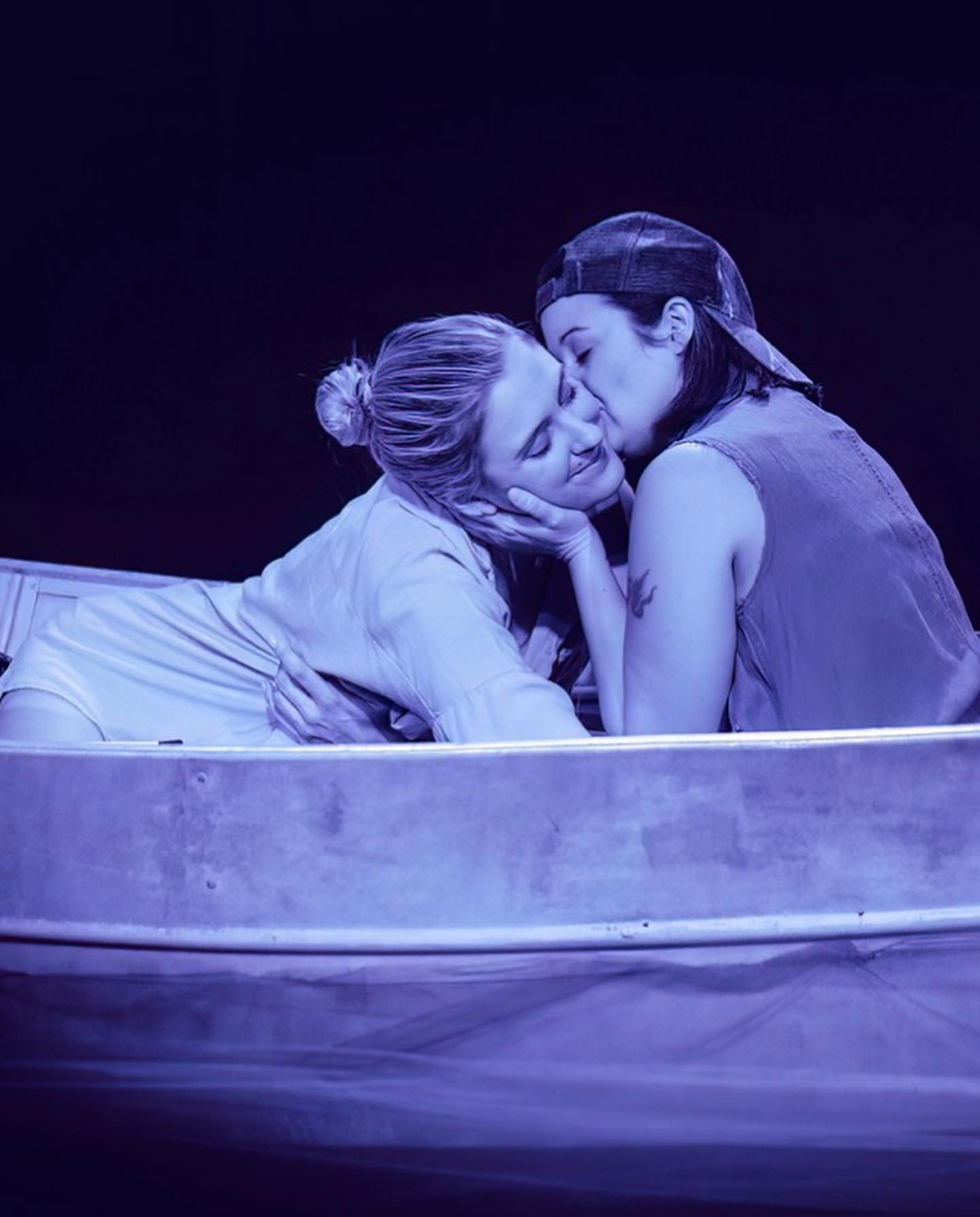 In a largely indifferent world and adverse circumstances, Betty and Kendra struggle to find self-worth and validation in one another. Betty's mind is as jumpy and full as a cage of butterflies. Kendra's in her own cage, where she has reduced her needs as much as possible. The time we spend with them in that isolated boat is very like the time we all spend in this life, struggling, and—when necessary—binding one another's wounds, both physically and metaphorically.

After all, when support systems fail as does this boat's outboard motor, we are left with one another.

The damnable virus disrupted the run, pushing opening night back a week to Thursday, December 8. Ken Webster and hosting venue Hyde Park Theatre managed to squeeze in additional performances on Monday and Wednesday evenings, Dec. 12 and 14, as well as a 3 p.m. matinee on Saturday, Dec. 17.

Click to view the Street Corner Arts program for The Gulf 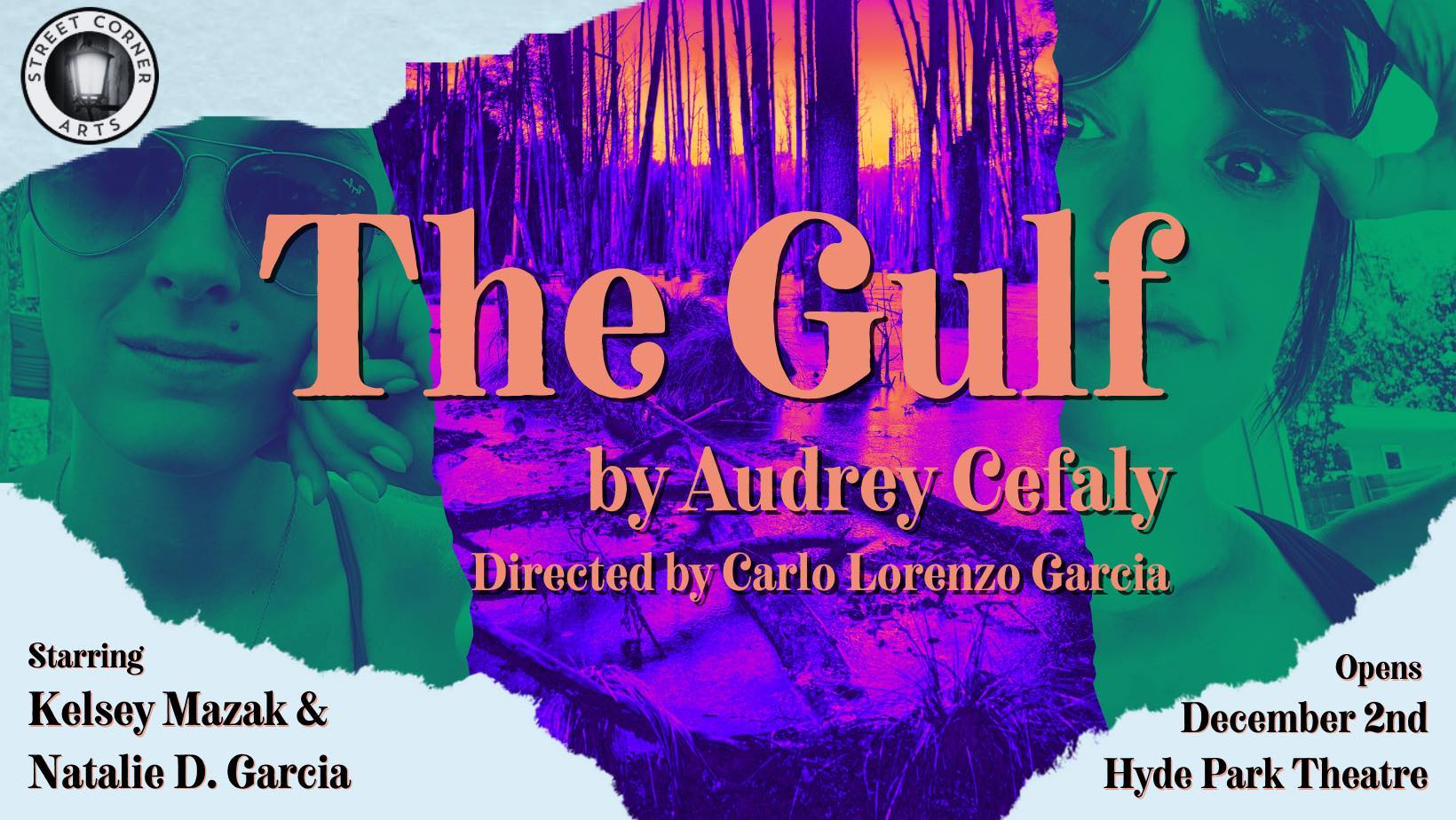