Every human being walks through rain with eyes open. That's one of the insights on human suffering and sorrows suggested in Gentle Our Driftless Caravan. And that's why on August 31 it was a great omen of blessing that a huge electrical storm soaked every element of the production and forced a cancellation of the opening performance. 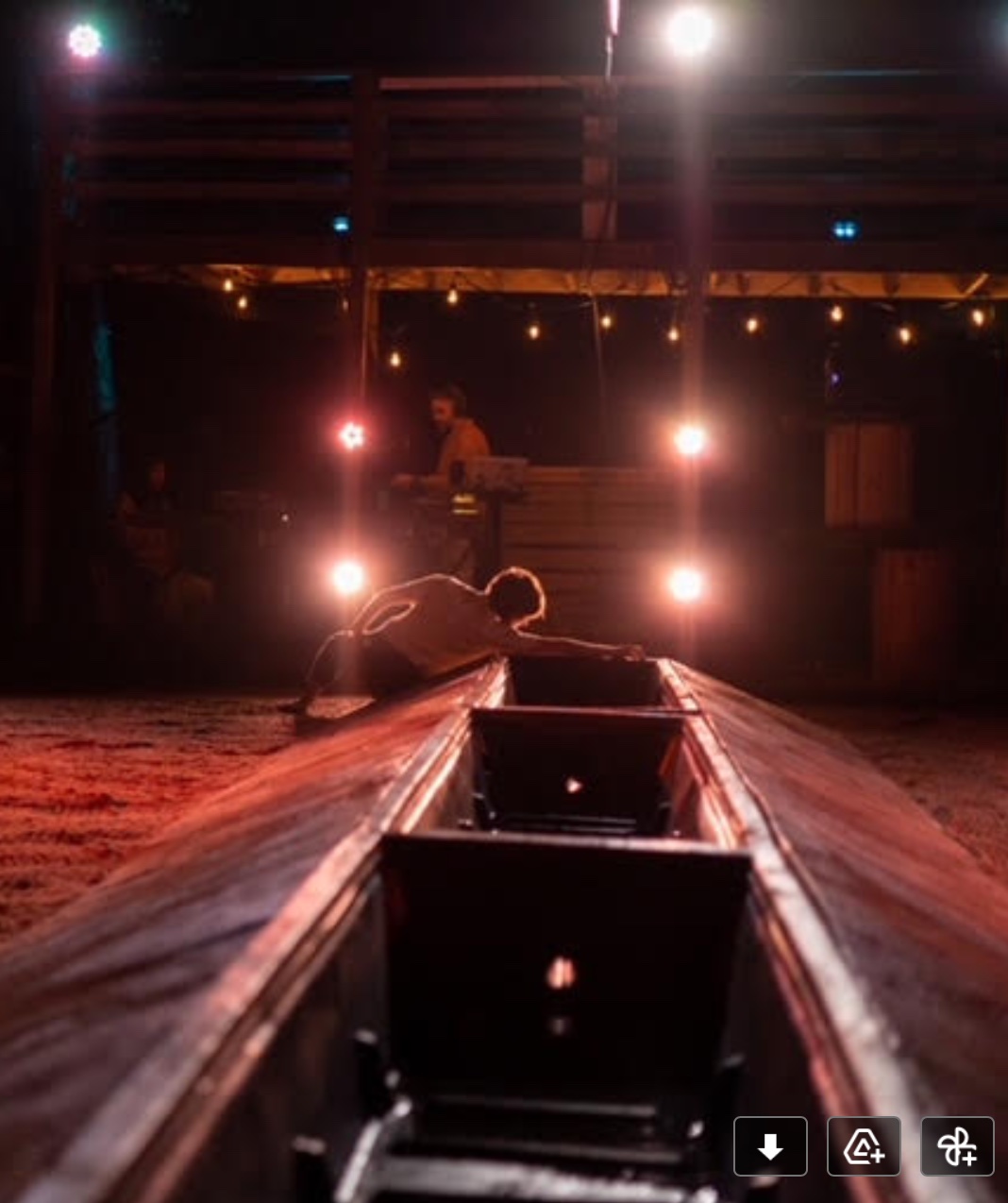 Gentle Our Driftless Caravan hails from the collaboration of En Route Productions, Blipswitch Movement, and Alexa Capareda. En Route (Dead Man’s Cell Phone) handled adroitly the surprisingly monumental production chores involving every aspect of the show. The complex and virtuosic choreography and movement were the playground of Blipswitch's Alex Miller, Taryn Lavery, and independent choreographer Alexa Capareda. The show was for outside performance, accepting all the risks of such. Rain Lily Farm accommodated the vision beautifully. The location is on Shady Lane just off Airport Boulevard in East Austin. The well-named lane cuts through an ancient walnut grove, the surviving members of which harbor and are harbored by Rain Lily Farm.

The performance takes place on an oval set on the lawns and by-ways of the farm. Acres of plants extend to the west. Sand forms the ground level stage, set around with benches of raw lumber and large cable spools turned on their sides. The entire space is backed by walls of wooden freight pallets set on end, fastened, and braced. The set design, innovative and appealing, is credited to Ia Enstera, and it provided everything Natalie George needed to design colorful and strategic lighting. A dark trench stretched down the axis of the oval, like a crack in the earth opened by an earthquake. Only a foot deep and lined, it actually sat on the surface, obviously a place for performance. Panels slanted upward from the outside to the edges of the trench, surfaces roughened to minimize slippage. Technical director Cheraya Esters did yeoman work bringing all the dimensions of the production into a coherent whole.

Gentle Our Driftless Caravan was presented as a single piece of about an hour’s length. It started with a single performer walking slowly into the space. She stopped at the trench to make a gesture. Her gestures grew sharper, more frequent, and consumed her body. One by one, the other performers joined Taryn Lavery (co-artistic director of Blipswitch) on the oval stage in individual dances sharing the same sharp phrasing and shapes. The choreography belongs to the modern trend featuring athletic, quick-firing arms forming shapes, trunk twists, and turns. Pedestrian gaits are common, many at walking pace, andante. Running intentionally breaks the movement patterns, and a large climactic section was racing around the oval track. 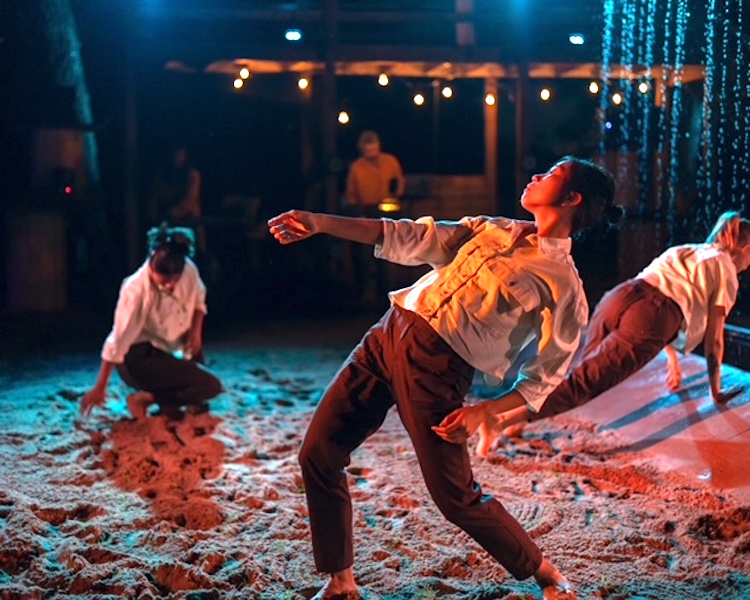 Call this choreographic mode alt-modern, a contemporary technique shaped in patterned ways to express the needs of the choreographer. As always in the contemporary world, the dancers were barefoot. Much of the current trend can be seen in the Dance on Film programs, the live showcases at Austin Dance Festival, and the recent Reimagine by Ariel Dance Theatre, although that show was a retrospective on thirty years of choreographic growth and change.

Alexa Capareda put a powerful stamp on the choreography, performing it with ease and expressiveness. Anyone who has seen her on the dance stage more than once quickly recognizes it. But what was she expressing? All the performers shared the same intense, sometimes searching emotionality while performing in near-perfection all the choreographed shapes and phrases. The dancers started singly (not solos as in spotlighted feature dances by one dancer) but they gradually and occasionally came together as duets in contact, holding each other firmly but gently.

Capareda's movements and immense stage presence seemed to express a sorrow demanding recognition. It may have been a sorrow for Nature, so intelligently crafted into a performance space for this show. The trench in the earth, the sand, the trees, the flowers, all represented a nature in which human beings could move. And gently, as in the title of the show. Capareda and the ensemble expressed gentleness and caring for one other and for a nature being pushed back improvidently by our species—much as was the walnut grove sheltering this space.

And then came the surprise. A razor-thin line of rain began to fall. The rain, from a drip-line hose elevated and stretched taut about ten feet above the trench, continued until the end of the show. The dance changed. The rain fell in single lines of droplets along the length of the trench, not as a wall of water in some theatrical arrangement. Not a drop fell outside the trench except as spray off the dancers when they touched a droplet-fall. 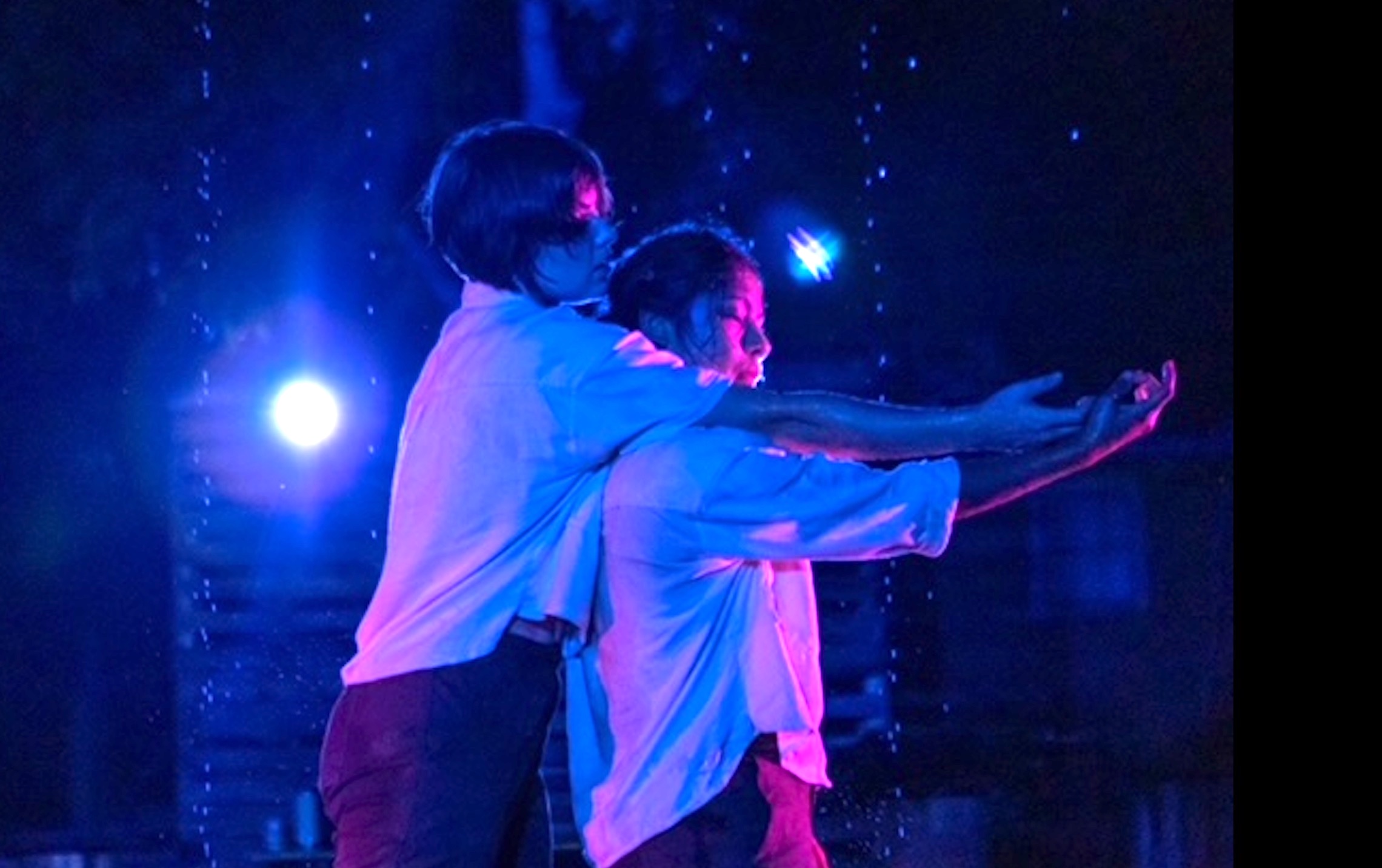 The dance showed clear variety even as the dancers’ costumes became wetter and muddier. They addressed the wall of rain from the sides as a barrier, but soon they moved back and forth through it in various combinations and in various shapes. At one point, they created a delicious tension as they lay on the angled panels beside the trench, feigning sleep or despair by a downpour inches from them. Perhaps it was just an irresistible image for the choreographers. There were a few more like that in this show. 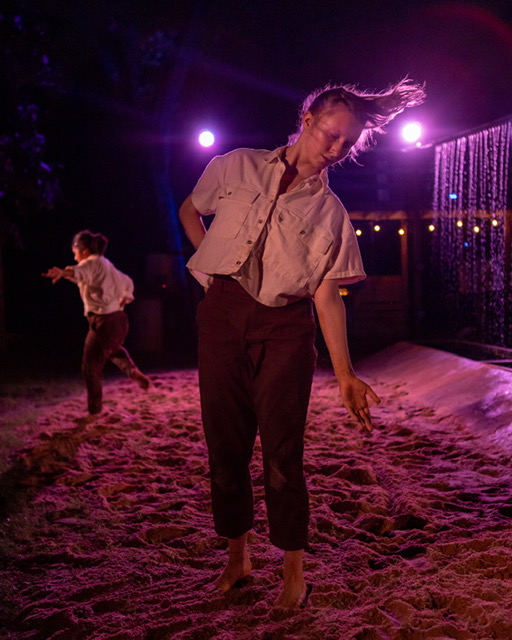 The performers’ work in this changing, somewhat challenging environment was admirable, even joyous, calmly expressed in the firm and gentle contact they held with each other. Everyone in the show seemed to tell us that caring is a profound virtue, not merely a sentiment for greeting cards. They were all up to the challenges and formed a well-balanced ensemble.

Newcomer Siri Cyan created a well of emotion with her facial expressions. Rising star Oddalys Saucido performed at a high level, especially in her dance to close the show. Clay Moore was the sole male in the performance, which is probably why it seemed like his male energy brought everyone together, and at the same time he was in balance with the other performers. That is a rare quality among powerful male dancers.

Performing choreographers Taryn Lavery and Alexa Capareda led the exquisite ensemble. Blipswitch co-artistic director Alex Miller also created choreography but did not perform. The ensemble also contributed to the choreography as directed to do so. The dance was mute, an unusual feature for modern-day choreography. The dancers did not vocalize, nor were there sung lyrics in the background music (performed well by Hanna Chou and Adam Hilton). The muteness gave emphasis to the strong emotionality.

The show started at 8:30 pm, twilight at this time of the year. Twilight is the liminal period between day and night.  Gentle Our Driftless Caravan was performed while advancing into night, and by the end, night fully enveloped the performers' universe.  Dancers set their final movements individually or in pairs and exited separately along different ways. The last performer walked that thin, razor-sharp line of rain, eyes open, from one end of the trench to the other and away from Rain Lily Farm, symbol of abundance and well-being, into that tender night.

Similarly, at the end of the run, Blipswitch will walk away from Rain Lily Farm into that tender night and their time of maturity and influence—the night tender, as Fitzgerald and Keats envisioned.

En Route Productions, based in Austin, Texas, is a theatre production collaboration between Lindsay Doleshal and Bridget Farr. Their work with Blipswitch and Alexa Capareda is a most auspicious conjunction of talents.

Gentle Our Driftless Caravan runs from August 31 to September 9, 2022, at Rain Lily Farm, 914 Shady Lane—barring rain (from the clouds). 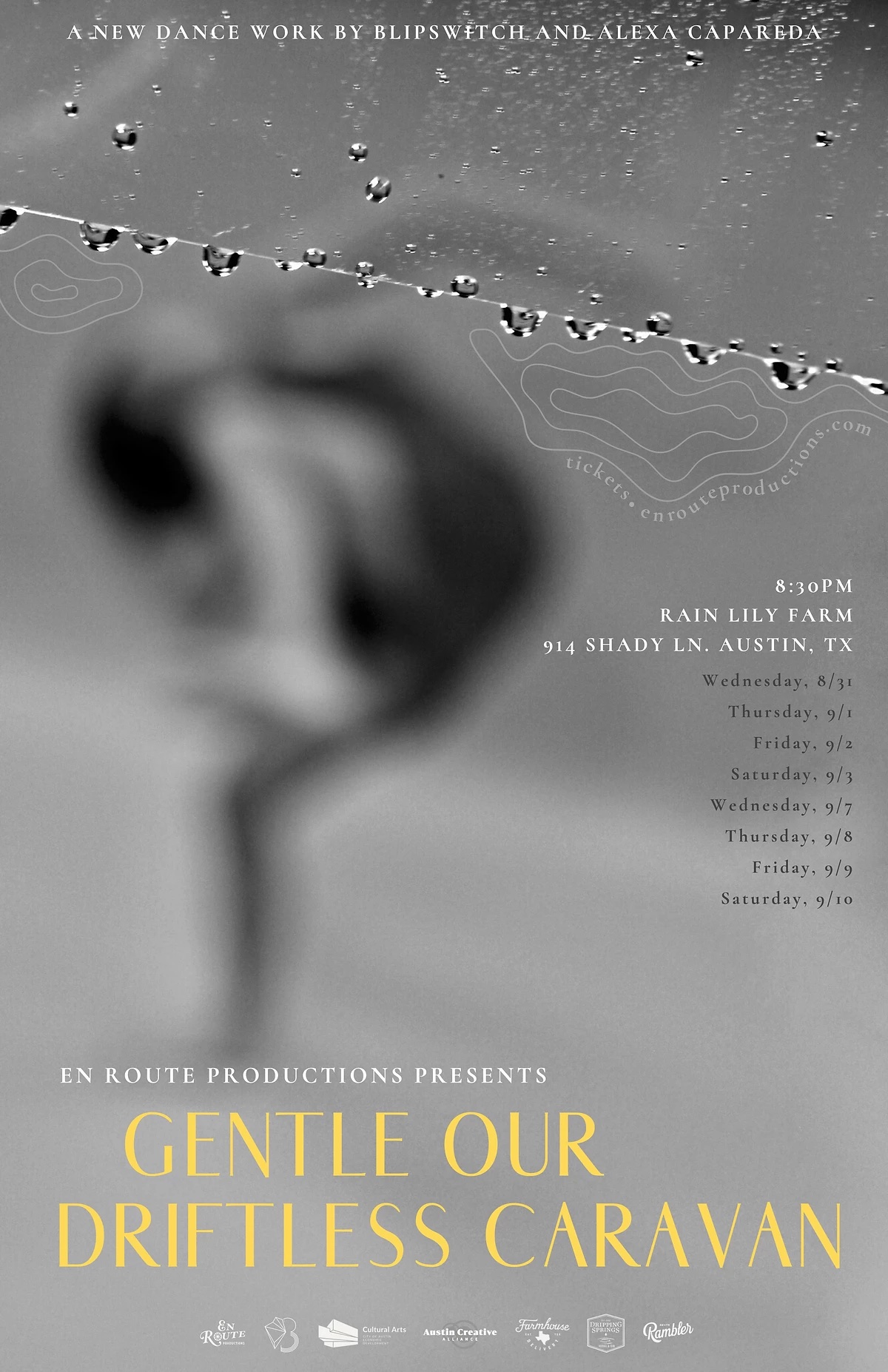