Review: Confessions of a Mexpatriate by Teatro Audaz
by Michael Meigs

I missed Confessions of a Mexpatriate by Raul Garza last year at Austin's Hyde Park Theatre, so I welcomed the opportunity to visit the cellar theatre at San Antonio's Public Theatre, where Teatro Audaz was presenting it for the July 4 weekend. That timing seemed appropriate; Garza's piece, appreciated in Austin and already performed elsewhere in the U.S. since that time, has as its focus the psychic dilemma of Americans keenly aware of family origins outside the borders. 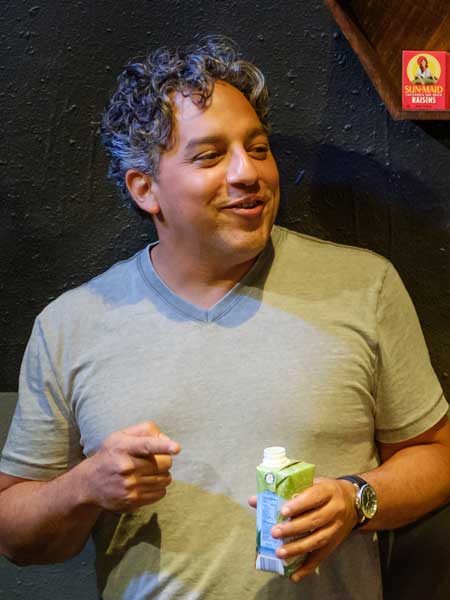 This was essentially a repeat of the Austin premiere, which wasn't difficult to achieve. Mical Trejo does a powerfully pulsing 90-minute monologue with no set other than a single chair at deep center page and a low table with a couple of clay-sculpted rural farm buildings. They're the epitome of cheesy, and the protagonist dismisses them in the first seconds of the performance. He lets us know that he tells his friends they're valued representations of his origins, and he lets us know that he's just having them on with these pieces of Mexican tourist crap. Kitsch without grace.

Director Ken Webster gave Trejo three acting areas instead of a representational set. The chair at deep center where this meta-meditation starts and ends; stage right, which represents the protagonist's workaday office world in gringolandia; and stage left, both for his visits to Mexico and for his meditations on what he supposes is his Mexican identity. The separation of those three worlds is emphasized by lighting shifts as the actor changes topics while stepping from one to another.

Garza's script makes this man verbal but not eloquent, perhaps a satirical embodiment of the advertisng and publicity world inhabited by the playwright himself. The verbal patterns woven by the actor are vividly glib with unexpected metaphor and executed with flashing speed and force. This character is trapped within his skull, mostly unconnected to the outside world, pecking away at his reality and his imagination of a true self able to incorporate both traditions: successful U.S. white collar worker in the hive of modern make-work and some  deeper, more authentic, more rooted personality.

The brightly colored poster and cartoon figure suggest comedy, but this is in fact an extended riff on confused identity -- note that the figure in cartoon profile has his head bowed and is carrying an attaché case, apparently on his way from skyscrapers to a village with a looming church.

Trejo mastered this complex text long ago, to such an extent that at first his precise diction and apparent speed of thought almost suggested that the actor was doing this job by rote memory. As the portrait advanced -- and one must call it a portrait, rather than a story -- one understood that the rapidity of the words was essential to the character. The self-termed Mexpatriate was slapping on new thoughts as if painting with a palette knife, trying to define an image that eluded him.  Trejo as the protagonist never does complete the picture and come to rest; he remains in the confused cage of his own rootlessness. His is an impressive performance of a discouraging phenomenon: a man who is an American, one hundred percent, but who has embraced the myth that he really should be someone else.

Links to three reviews of the 2018 production in Austin, via CTXLiveTheatre listing

"Confessions of a Mexpatriate" at Hyde Park Theatre from Eric Graham on Vimeo.

Confessions of a Mexpatriate
by Raul Garza
Teatro Audaz 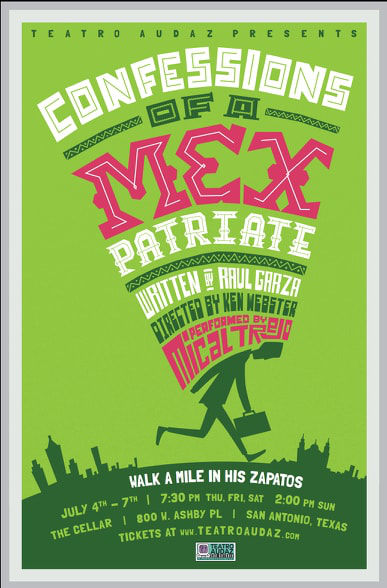