Nicole Oglesby's Little Bird offers, like a gift, a gentle imagining of childhood innocents who are oblivious of the brooding evil that surrounds them. Willa and Peg are thirteen-year-old girls, best friends, trusting in one another and their Texas bayou surroundings. Willa's discovery of a litle bird fallen from its nest at first seems a randon incident, one that we probably all hold from childhood -- Willa gathers the creature in her hands but is admonished by her only slightly more knowledgeable friend, "You shouldn't touch it! Now its mother will refuse to recognize it!"

Oglesby's dialogue flows in lively unguarded exchanges between the two girls, and it's a pleasure to see and hear them discovering the world and one another. Franny Harold's eyes sparkle darkly in her role as Willa, mirroring her wonder at the world about her. They'll stay that way throughout. Kenzie Stewart as Peg has a confident bravado that will change over the eight years that pass between the play's opening and close. These children offer two very different versions of woman's fate, and one is tempted to ask which is better, particularly with the playwright's creation of the protected alternative afterlife. 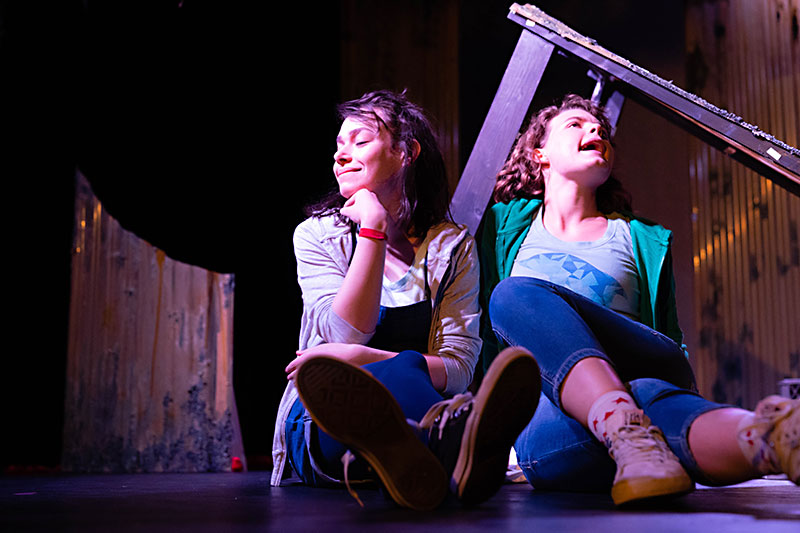 This is a ghost story with a wistful adolescent fantasy of an unfrightened afterlife. The dead linger on and may attach themselves as imaginary companions to a favored living being. Willa is followed and visited by Margot, a woman-child of her own age who was murdered in the woods. The evil of the world hasn't stained or injured the serene and playful Margot. The afterlife seems to have spared her from life, and she's just as sweetly spontaneous as Willa. They're a couple of best buds, hanging out.  Laney Neumann as Margot the revenante is paradoxically lively and lithe, a potential ballerina who will never realize that potential.

Little Bird remains firmly in the feminine, although with a bifurcation. Peg and Willa will experience different fates wrought by The Hunter, a lowering, self-certain presence who is all males and any male. Keith Adam Paxton is stolid, older, determined, unemotional and adult -- and deadly for both girls, although in different ways. One girl dies in the mysterious woods, as Margot did; the other grows up to leave her family and move in with The Hunter. The playwright implicitly is inviting us to contemplate which fate is kinder.

As befits a parable, set pieces are minimal, representative and can be reconfigured. Marian Kansas directs with a light touch. The music composed and played by Christabel Lin for solo violin provides comment and tone so subtle that it lives with the characters in this magic world.

Terrible things happen in this world, but we and the characters are protected from them. Murder fades and leaves no more than an indistinct stain; instead of being solved, the crimes simply become irrelevant. In our own world as well, time renders into ashes so many of our burning concerns.

Creating this piece, Oglesby and Kansas have transformed and muted themes we endure daily in our culture's focus on dominance, conflict and violence. Their delicate fable reminds us that innocence must be protected and women face unacceptable pains and costs inherent in the organization of our society. And at the same time their vision as realized by the collaborating artists offers the gentle uplift of hope.