Four Corners in a Circle is the latest in the annual series of winter dance shows by Chaddick Dance Theater, Cheryl Chaddick, Producing Artistic Director. This year’s show was a step up in several good senses, the first being its location in the spacious Austin Ventures Studio at Ballet Austin. The 2018 edition was comprised of two dance pieces, the first being “Life Between Us,” followed by “Crisis of Meaning.”

“Life Between Us” was a short story dance, albeit one without any spoken lines. Four dancers in street attire (Cara Cook, Sandie Donzica, Amber Michelle Burkley, Emily Rushing) came out and sat in folding chairs that appeared distributed at random in the performance space. Soloist Angela Benz entered, and with the language of contemporary dance technique, tried to engage the chair sitters in conversation, to no avail. The chair sitters pulled out their cell phones and became increasingly deeply involved with their devices, getting noticeably more withdrawn and absorbed in their technology as the dance progressed. The piece was clever commentary on the accelerating pace of self-imposed isolation in modern life.

The floorwork in the piece was especially intriguing in that, unlike its usual use as a relieving accent, the floorwork became part of the narrative thread and central to what soloist Benz was trying to say to the impassive device gazers. Benz sometimes literally crawled toward the chairs of the sitters.

The second piece in the show was “Crisis of Meaning.” The program and the curtain-speech master of ceremonies explained carefully how the piece had been built over a considerable period of time from Buddhist mandala symbolism, its foundations and meanings. The core concept is the universe and how the individual fits, or may fit, into it. To quote the program, “Much like dance or theater performances, the mandala is a ritual that exists in space for a short time and then is swept away and then gone forever.” 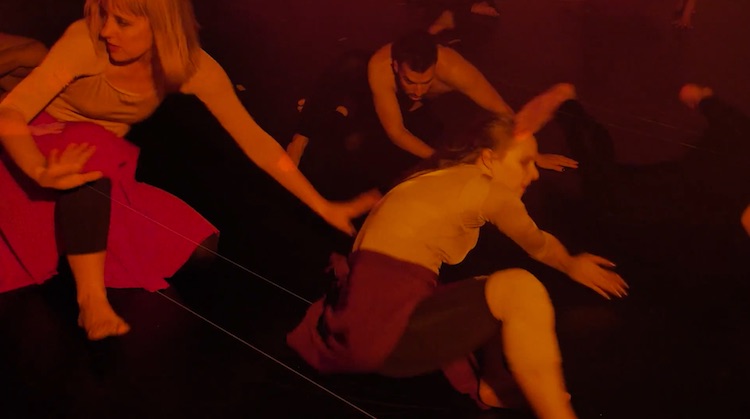 This particular transitory ritual was a dance divided into ten sections. The sections were mixes of duets, other combinations, and full ensemble work.  The method was well-advanced contemporary technique, so-called “barefoot ballet,” with plenty of accessible everyday gestures and emotionality, athleticism, and a few gymnastic passages. Stepping patterns or rhythms controlled by the brilliant multimodal music composed for this dance by John Michael Hunt were not evident.  Dancers entered and exited by walking, running, leaping, crawling, or other means of purposeful locomotion.

The accents in this piece, wide as the starry universe, were micromovements. These were best shown toward the end when Kevin Armstrong stood in the middle of a circle ensemble (the mandala) and merely quivered his trunk as others approached and retreated.  This was perhaps a unique choreographic moment, and somehow, inexpressibly, fraught with the deeper meanings of the piece.

The effort to relate the piece to Buddhist religious precepts on a conscious level was difficult for the audience; it was better to let the precepts remain largely obscure and instead enjoy the marvelous abstract movement and imagery the concepts produced onstage.  Let the dance come to you.  Kudos to the choreographic team of Cheryl Chaddick and Cameron Oefinger.  Well done.

The dance itself began with entrances by the four male dancers (Kevin Armstrong, Isaac Iskra, Aurelio Planes, and Tristan Rogers).  They were bare to the hips, with knee-length, flowing skirts below. The visual was of rock-hard chests and steel-hard abs. The visual promise was fulfilled with their high-flying, athletic, dynamic performances with lifts seemingly as light and effortless as flowers blossoming.

The males drove the various sections through the dance without pauses between the sections, often with overlapping transitions. In a few sections the scrim grew bright with a video projection in live from above.  It was like looking at an art mandala. The audience saw on screen the dancers as viewed from above, the dancers’ bodies forming and animating the mandala in swirls and curvilinear paths through the space. This was quite a visual gift to the audience. Kudos to Lighting Designer Sam Chesney, I.A.T.S.E., for realizing this choreographic vision. 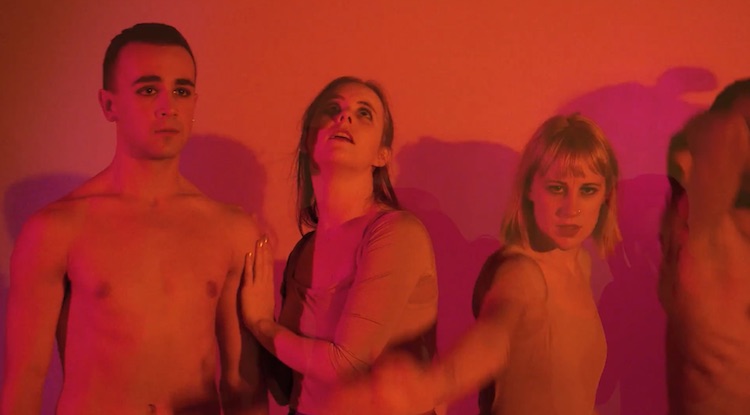 Although gender issues were not thematic in the piece, certain major aspects of the performance brought gender matters forward, probably unintentionally.  In contrast to the talented male dancers, the talented female dancers (Angela Benz, Amber Michelle Burkley, Cara Cook, Sandie Donzica, and Emily Rushing) looked almost lumpy in their modest, well-draped, skirted costumes. Their competence was not in question by reason of their appearance; however, their dance imagery was often distracted by the aggravating detail of flying, sweaty, often stringy long hair (the males had short or well-contained hair). Once upon a time in NYC, Twyla Tharp took her dance corps to the Vidal Sassoon salon and bought short, fashionable hairstyles for her dancers. The public relations benefits for Tharp and Sassoon were immediate, but since then the practical value of dancer haircutting generally continues to be revealed in hundreds of modern dance performances, largely by its unfortunate lack.

Lest the reader level a charge of sexism at the writer, be reminded that this unevenness of presentation of the sexes was no doubt wholly unintentional, but it certainly did exist.  The choreographers realized their lofty visions brilliantly. But sometimes it takes a sympathetic eye to point out something hanging out at the edges and perhaps uncomfortable to realize; in this case it is also clearly an effect of the Law of Unintended Consequences.

The dance taken as a whole was full of innovative movements large and small, and it called us to a higher level in our lives. The ensemble work especially was energetic, tightly timed, and exquisite, sweaty hair and all.

Four Corners in a Circle is gone in a flash, vanished before you read this.  One hopes that “Crisis of Meaning” will enjoy many remountings at dance festivals in Austin and elsewhere.