The Road to Madness
by Performing Arts San Antonio (PASA)

F. Scott Fitzgerald is interviewed in Purgatory by a modern interviewer who feels deep nostalgia for the era that Fitzgerald wrote about, even though she has never known it first-hand.  Fitzgerald is forced to relive some moments--mainly those involving his wife, Zelda, and Ernest Hemingway, the admirer who ultimately turned on him.

Fridays and Saturdays at 8 p.m. 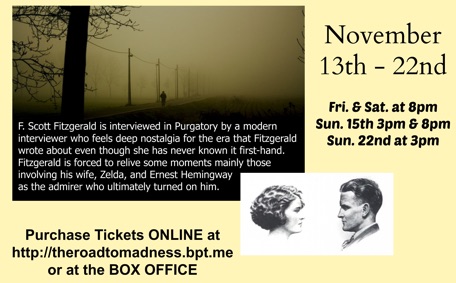