The Mountaintop
by Austin Playhouse

Hailed as "daring, rousing and provocative" by Entertainment Weekly, The Mountaintop by Katori Hall is a bold re-imagining of the last night of the historic life of Dr. Martin Luther King. After giving a prophetic speech at a sanitation worker’s strike in Memphis, Martin Luther King, Jr. staggers into Room 306 at the Lorraine Motel. He’s exhausted, needs a cigarette, and his feet stink. When a mysterious maid delivers a cup of coffee with a side of hard truth, Dr. King is forced to confront his own humanity and the fate of our nation. Winner of the Olivier Award for Best New Play, The Mountaintop’s “soul-stirring” (Variety) storytelling fuses theatricality with spirituality to reach a summit that will leave audiences breathless.

"I just want to do God's will. And He's allowed me to go up to the mountain. And I've looked over. And I've seen the Promised Land. I may not get there with you. But I want you to know tonight, that we, as a people, will get to the promised land!" - Martin Luther King, Jr. on April 3, 1968 at the Mason Temple in Memphis, Tennessee.

The Mountaintop stars Marc Pouhé as Martin Luther King, Jr. and Carla Nickerson as Camae. The play is directed by Don Toner, with lighting design by Don Day, and sound design by Joel Mercado-See.

The Mountaintop is recommended for mature audiences due to adult language.

Austin Playhouse is a professional theatre currently performing its 15th season. Under the leadership of Producing Artistic Director Don Toner and Artistic Director Lara Toner Haddock, Austin Playhouse has grown from a three-play season on the campus of Concordia University, to a year-round operation producing an average of eight plays a year. Austin Playhouse is currently performing at ACC's Highland Mall campus. The theatre is currently being renovated to include an expanded lobby, rehearsal hall, and restroom facilities.

TICKETS: $24;  BOX OFFICE: 512.476.0084 or online at: www.austinplayhouse.com
DISCOUNTS: All student tickets are half-price. $3 discount for Seniors 65 and up.
THURSDAYS: Limited Pick-Your-Price Rush tickets will be available at the box office one hour prior to show time for each Thursday performance. 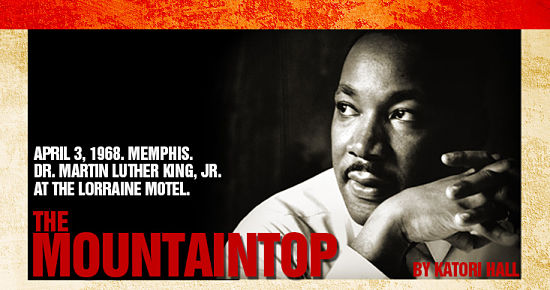