Disney’s The Little Mermaid finds a home for the holiday season live on stage at Georgetown’s Historic Palace Theatre!  With performances at various times from November 18, 2016, to January 15, 2017, opportunities abound for soaking up this magical story of the beautiful young mermaid, Ariel, who longs to leave her ocean home to live in the world above.  Based on one of Hans Christian Andersen’s most beloved stories and the classic animated film, Disney’s The Little Mermaid is a love story for the ages. With music by eight-time Academy Award winner Alan Menken, lyrics by Howard Ashman and Glenn Slater, and a captivating book by Doug Wright, this fishy fable will capture your heart with its irresistible songs including “Under the Sea,” “Kiss the Girl,” and “Part of Your World.”

The suggested rating for Disney’s The Little Mermaid at the Palace is ‘G’ for family-friendly musical fun!

Mary Ellen Butler, the Palace’s Artistic Director since 2004, directs The Little Mermaid with her inimitable flair, taking us under the sea and back again with the great visual effects and music of this magical production!  As Artistic Director, Mary Ellen produces the season and directs several shows:  Young Frankenstein, Xanadu, and Camelot in the 2015-16 season.  Mary Ellen has double- or triple-cast most roles in The Little Mermaid to accommodate the 33 performances scheduled for this ever-popular show.

Megan Pritchett brings her experience and keyboard skills to the job of Music Director for The Little Mermaid in her third Palace production.  Courtney Wissinger Eiland is Choreographer for The Little Mermaid, having just completed the same for 1776, The Musical. Courtney holds a BFA in Acting from UT and most recently co-Directed and Choreographed several Award-winning Zilker Theatre Productions in Austin.

With plenty of previous lighting credits at the Palace, Faith Castaneda joins the production team as Lighting Designer.  (Faith is also the resident lighting designer for the Palace Education Center and their wide array of programs.)  Barb Jernigan, as Scenic Artist for The Little Mermaid, has beautified and/or branded approximately 60 shows in more than ten years with the Palace.

The Palace is grateful to The Georgetown Project as the non-profit partner for The Little Mermaid, and for their participation with The Palace in Soiree at the Sheraton, A Coming Together for Kids

The Palace seats about 295, with reserved seating paid for in the ticket price.  The Palace office in the lobby of the theatre is open Monday through Friday from 10:00 a.m. until 4:00 p.m. (except for some holiday dates).  Purchase tickets and select seating online at www.georgetownpalace.com or by calling 512-869-7469.  (Please call ahead regarding special needs seating.)  Visa, Master Card, Discover, and American Express are accepted.

The Historic Palace Theatre is located at 810 South Austin Avenue in downtown Georgetown and is part of the most beautiful town qquare in Texas! 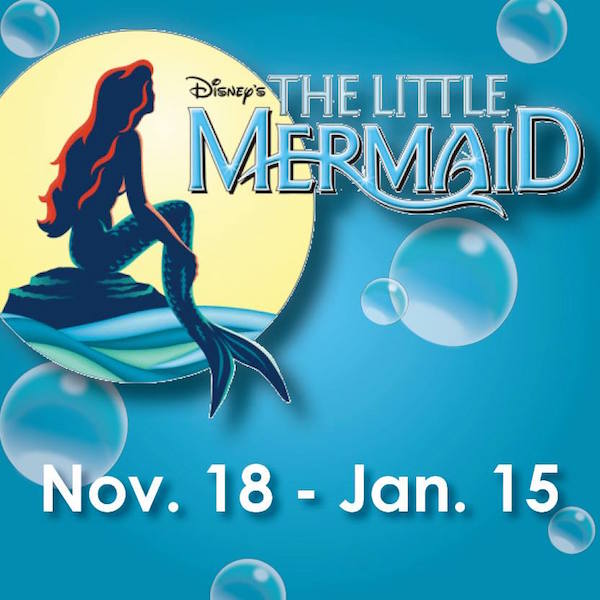