It's Only A Play
by Sam Bass Community Theatre

It’s the opening night of The Golden Egg on Broadway, and the wealthy producer Julia Budder is throwing a lavish party in her lavish Manhattan townhouse. Downstairs the celebrities are pouring in, but the real action is upstairs in the bedroom, where a group of insiders have staked themselves out to await the reviews. The group includes the excitable playwright; the possibly unstable wunderkind director; the pill-popping leading lady, treading the boards after becoming infamous in Hollywood; and the playwright’s best friend, for whom the play was written but who passed up this production for a television series. Add to this a drama critic who’s panned the playwright in the past and a new-in-town aspiring singer, and you have a prime recipe for the narcissism, ambition, childishness, and just plain irrationality that infuse the theatre—and for comedy. But don’t worry: This play is sure to be the hit they have all been hoping for.

“This show is without a doubt hilariously, sidesplittingly funny…These are among the funniest lines to roll off a stage in years…IT’S ONLY A PLAY deserves only a rave.” —The New York Times.

“At the heart of the humor is the sublime narcissism of the professional players and their honest conviction that nothing matters except the theater…You really must laugh at McNally’s unquenchable wit—but those sloppy-kiss tributes to the theater…are deeply felt and honestly moving.” —Variety.

“This is the sort of comedy that puts the broad in Broadway, with a genuinely funny script boasting pointed barbs at theater mainstays such as Liza Minnelli, Harvey Fierstein, Audra McDonald, and New York Times critic Ben Brantley…IT’S ONLY A PLAY is a poison-pen mash note to New York theater, at once gleefully bitchy and affectionate.” —Entertainment Weekly.

It's Only A Play
by Terrance McNally
Sam Bass Community Theatre 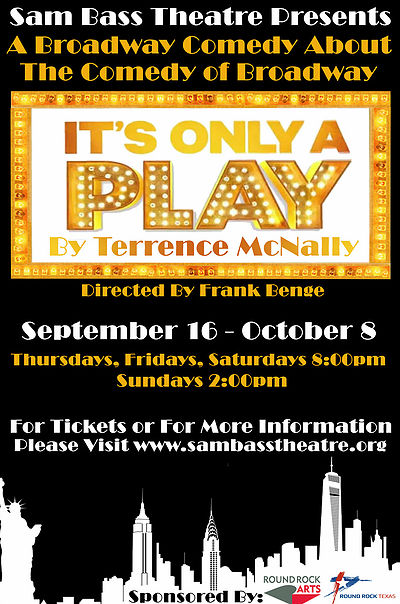