Happy Days is a musical with a book by Garry Marshall and music and lyrics by Paul Williams, based on the ABC TV series of the same name. The story is set in approximately during Season 4 of the original sitcom. The story concerns the kids' plans to save Arnold’s from demolition by hosting a dance contest and wrestling match. 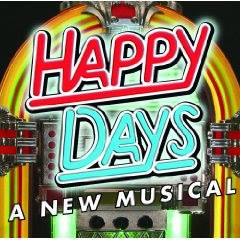