Carrie, the musical
by Woodlawn Theatre

This Halloween season, the Woodlawn Theatre stages the edgy and strangely charming, Carrie the Musical, based on Stephen King's haunting story of teen angst, religious fervor, and the complicated relationship between a mother and daughter.

The musical follows the story of Carrie White, a misfit who navigates the harsh realities of high school bullying and her overprotective mother. Carrie discovers a new and violent power unleashed inside her and she’s not afraid to use it.

Patrons are invited to don their best prom attire on October 25 for Carrie’s Prom at the Woodlawn. Two patrons will be crowned prom King and Queen. They will receive a crown, a Carrie t-shirt, 2 tickets to White Christmas the musical, and a Halloween goody bag.

Get out your favorite Halloween costume for the Carrie Costume Contest on October 31. The winner will receive a Carrie t-shirt, 2 tickets to White Christmas, and a Halloween goody bag.

Carrie the Musical runs October 17 – November 9, concurrently with The Rocky Horror Show. Purchase a Science Fiction Double Feature packages to save 20% off Carrie and Rocky Performances. Show times are Fridays and Saturdays at 7:30 p.m. and Sundays at 3 p.m. There will be no show on November 8 due to Broadway @ Woodlawn Theatre featuring Seth Rudetsky and Ana Gasteyer.

Tickets are available for purchase online at www.woodlawntheatre.org, or by calling the box office at 210-267-8388. Prices are $15 for students and children, $20 for seniors and military, and $23 for adults. 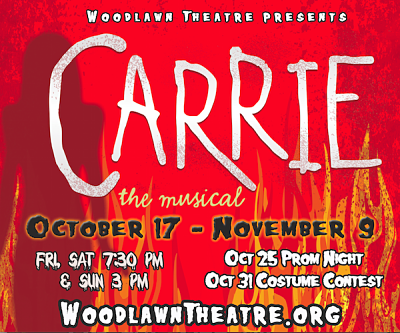