Tickets are now on sale for our BIGGEST event of the season: SCROOGE on the Riverwalk!

The Company Theatre is on the fourteenth annual Texas tour of BAH HUMBUG! A one-man Christmas Carol. Award-winning actor and company principal Damian Gillen presents his unique, adaptation of the Charles Dickens classic A Christmas Carol during a statewide tour.

BAH HUMBUG! is an imaginative adaptation of Charles Dickens’ timeless tale of hope and compassion. Gillen plays all the 20+ roles in this theatrical extravaganza that chronicles the story of the miserly Ebenezer Scrooge, who is challenged to open his heart after being confronted by three spirits during a one-night whirlwind journey of redemption. The play is supported by numerous special effects, rapid costume changes and traditional Celtic Christmas tunes.

The Company Theatre is an independent, not-just-for-profit, touring theatre company, dedicated to delivering high-quality family-friendly productions that present live theatre as a viable entertainment option to people of all ages. The Dinnerbox Series presents live theatre in your favorite local restaurants. The Company Theatre’s critically acclaimed troupe of actors, audience-tested production capabilities and memorable adaptations of renowned works have been delighting Texas audiences since 1993. For more information, visit: www.thecompanytheatre.org

at Arneson River Theater at the Shops of La Villita. 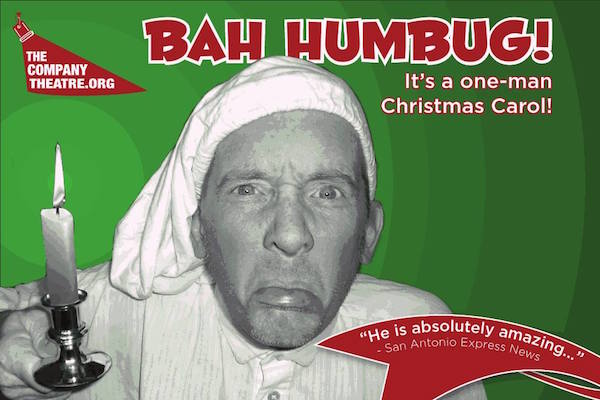 THE COMPANY was created in 1993 by Ken Bradley, Cathy Grant and Damian Gillen. The goal: to produce the original play scripts that were eventually made into feature films and ...