In celebration of its 30th Free Shakespeare in Zilker Park, The City of Austin, Austin Parks and Recreation Department and Beverly S. Sheffield Zilker Hillside Theatre, in coordination with Austin Shakespeare, present As You Like It. The show brings new actors and company alumni together in a RenFaire-style As You Like It. Performances run 8 p.m. Thurs-Sun., from May 1 – May 25, with a preview on April 30. One of Shakespeare's most delightful romantic comedies, As You Like It is the story of Rosalind, the smartest girl in the world, falling for Orlando, the most handsome boy, both of whom are banished to the forest of Arden. Through the course of the play, Rosalind must disguise herself as a boy, testing the true love of the unsuspecting Orlando. Their journey leads them to encounter a band of merry men, silly shepherds and a melancholy philosopher.

As You Like It is the favorite Shakespeare play of Austin Shakespeare's Artistic Director, Ann Ciccolella. "I am thrilled to be directing it. Audiences will spend an evening with some of Shakespeare's most memorable characters, such as the quick-witted heroine Rosalind, Touchstone the Jester, while hearing the legendary 'Seven Ages of Man' speech," she says.

The show culminates with four weddings in a RenFaire fun-fest while everyone sings – 'With a hey, and a ho, and a hey nonino!' 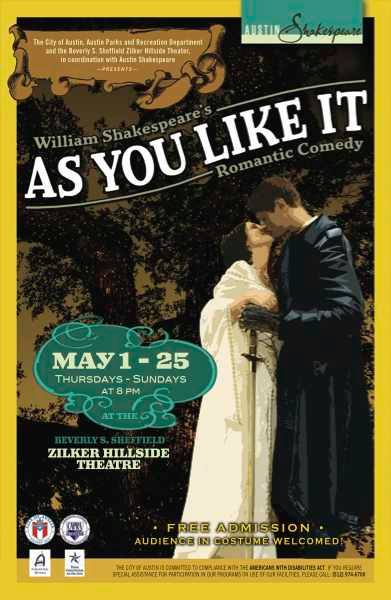