A Tuna Christmas is a broad comedy set in the fictional town of Tuna, Texas. The plot centers on the town's annual Christmas Yard Display Contest, won 14 times in a row by Vera Carp. A mysterious "Christmas Phantom," known for vandalizing the yard displays, has the contestants on edge. Among the subplots are Stanley Bumiller's attempts to end his probation and leave Tuna, Bertha Bumiller's struggle to hold her family together at Christmastime, and Joe Bob Lipsey's fight to mount successfully his production of A Christmas Carol despite the town controller of the electric company threatening to turn the lights off. The play is both an affectionate commentary and withering satire of small town, Southern life and attitudes. A Tuna Christmas is the second in a series of comedic plays set in the fictional town of Tuna, Texas. (The play is preceded by Greater Tuna and followed by Red, White and Tuna and Tuna Does Vegas.) Two actors play all 20 zany characters.
Sam Bass Theatre’s production of A TUNA CHRISTMAS will be directed by Robyn Conner who is making her non-educational directing debut at Sam Bass Theatre. She has been teaching theatre in the Austin area for over 20 years. Mrs. Conner was recently seen on the Sam Bass Stage where she starred as Elizabeth Proctor in Arthur Miller’s The Crucible. When asked about why Mrs. Conner took on one of the most popular shows to ever come out of Texas she said “I am a native Texan and have lived here almost all my life and I love how this play captures not only the humor and heart of small town Texas but how the characters despite their accent are universal. Everyone who sees this show will recognize a friend or family member in these characters.”
Mrs. Conner also explained the relevance of this comedy in a 2016 society by stating “As a cast we’ve discussed how the citizens of Tuna might have voted in this year’s election. Despite the obvious stereotypes, we’ve come to the conclusion that there are both Democrats and Republicans in Tuna. I think this discovery leads to the bigger picture. We can’t make assumptions about people simply based on where they live and how they speak. Every community regardless of size or location is full of people with different views and lumping all of
one type together, well that’s just wrong.”
The Show Stars
R. Michael Clinkscales (Broadway World Austin 2016 Nominee Best Actor ( The Boys Next Door), Broadway World Austin 2015 Nominee Best Lead Actor in a Musical (Forum), B. Iden Payne Nominee Best Cast (Ave Q), Broadway World Austin 2013 Nominee Best Featured Actor in a Musical, ATE People’s Choice Award Best Musical Into The Woods, ATE nominee Best Lead Actor in a Musical Into The Woods.)
JACOB VIGIL (Giles Corey - SBT The Crucible)
A TUNA CHRISTMAS is directed by ROBYN CONNER with Assistant Direction by KATIE BROWN and Technical Direction by ERIC NELSON. The production features Scenic Designs by DEBORAH MISCHEL/ERIC NELSON/JIM MISCHEL with OLIN MEADOWS as Costume Designer plus Hair and Makeup Designer; JOHN CONNER as Lighting Designer; ROBYN CONNER as Sound Designer with PATRICK MCELHINNEY as Stage Manager.
A TUNA CHRISTMAS IS PRODUCED WITH SPECIAL ARRANGEMENT BY SAMUEL FRENCH PLAY SERVICE.
Recommendation: This show is rated PG for some mild adult language
Run Time: Approximate two hours including one intermission
Special events in celebration of A TUNA CHRISTMAS, include:
The City Of Round Rock, and Round Rock Arts are the leading sponsors for A Tuna Christmas. 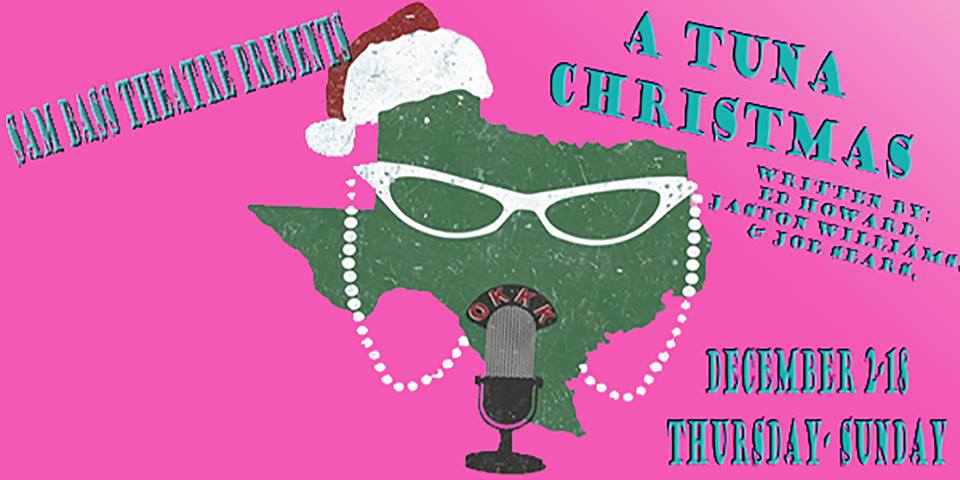