Austin Shakespeare’s Free Shakespeare in Zilker Park returns to offer the famous romantic comedy A Midsummer Night’s Dream for four weekends May 4-May 29. The colorful outdoor story of young lovers made crazy by fairy tinkering is a family favorite. This professional production is made possible in collaboration with City of Austin’s Parks and Recreation Department.

“We are thrilled to bring Austin-tatious creativity to what has been hailed as Shakespeare’s ‘perfect comedy’ with professional Austin actors playing lovers, fairies and comics, featuring a pop music mix by L.B. Bartholomee,” said Austin Shakespeare Artistic Director Ann Ciccolella.

Shakespeare’s most popular play has colorful costumes designed by Aaron Kubacak, “The costume design for ‘Midsummer’ embraces whimsy, and incorporates lush jewel-tone fabrics, botanical elements, and magical fairies with headdresses that light up,” Kubacak said. “Its contemporary style has delightful hits of steampunk and gender play.”

Most of the cast of experienced actors were selected from open auditions. The zany comics are known as the “mechanicals:” Quince, the workman/director for the bizarre “play within the play” is Bennie Braswell, Snug the Lion’s part is River Ramos; Snout/Wall is Trace Turner; Flute/Thisby is Coltrane Conklin, Starveling/Moonshine is Meg Hobgood. They are all led by the hilarious Bottom, Gwendolyn Kelso*, who gets transformed into a donkey.

The glorious Queen of the Fairies played by Kate Glasheen* is “charmed” to fall in love with the donkey-headed Bottom. Her husband is Oberon, the fantastical King of the Fairies, played by Gabriel Diehl. His henchman is the mischievous acrobatic Puck, played by Henry DelBello. Winged fairies includeAmani Alexander as Peaseblossom, and Danielle Kaigler as Cobweb.

The bewitched lovers are played by Dane Parker (Lysander) and Max Green (Demetrius), and their confused beloveds are Helyn Rain Messenger (Helena) and Eliza Renner (Hermia.)

All is overseen by the legendary hero, Theseus, played by Charles Gross, and his conquest Hippolyta is Emily Green. In another gender swap, Milaka Falk is the forceful parent Egeus who starts it all.

Signed interpreted performances will be available on select dates. Check the website for more information, www.AustinShakespeare.org.

ABOUT AUSTIN SHAKESPEARE: “The Bard is only the beginning.” Audiences travel many roads with this professional company for surprising and entertaining theater productions featuring heightened language at The Long Center’s Rollins Studio Theatre in the fall and spring, as well as Free Summer Shakespeare in Zilker Park and Young Shakespeare at the Curtain Theater replica. Founded in 1984 and the only professional classical theater company in Central Texas, Austin Shakespeare stages performances that are fresh, bold, imaginative, thought-provoking and eminently accessible — connecting the truths of the past with the challenges and possibilities of today.  Austin Shakespeare’s ongoing “Shakespeare Aloud” reading group and “Artist’s Way” sessions invite new participates weekly and the company’s education program 20/20 sends professional actors into schools to encourage love of language.

Preview on Wednesday, May 4. 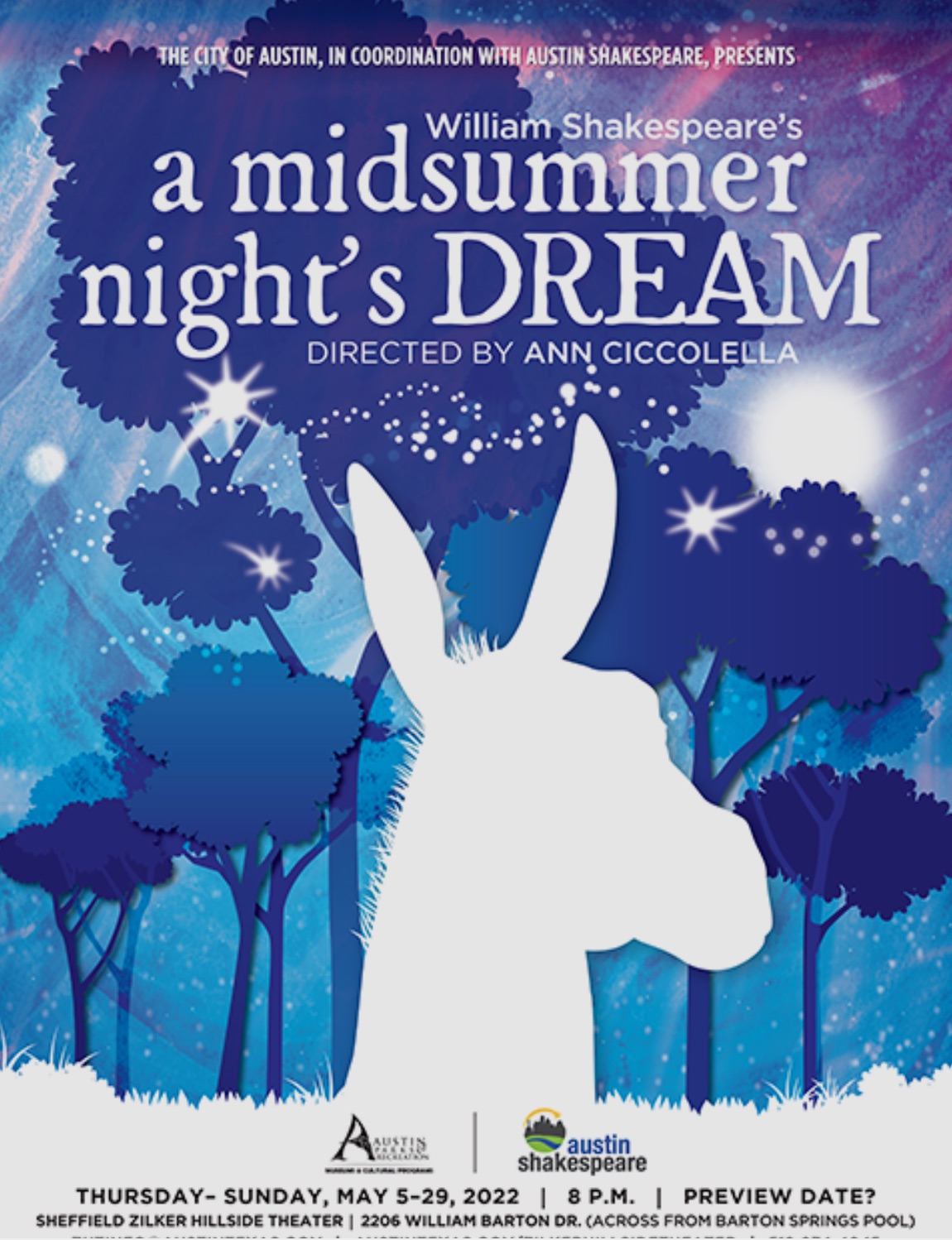