A darkly comic southern drama about love, art and the power of healing. After a tornado barrels through North Alabama leaving nothing but death and destruction, only June and her wisecracking pet goat Weezy live to tell the tale.  When Alice, a prominent photographer, arrives to take pictures of June’s scars, all are tipped to the breaking point in this beautiful story of life after death.
Three years after the tornado wiped out her entire family, June has isolated herself, along with her goats Weezy and Bib, on what remains of her family farm. June, who suffers from agoraphobia and crippling PTSD, is covered, from head to toe... with scars. Alice, a world-renowned photographer, has come to take pictures of June for a series on women with scars. But Alice is carrying scars of her own and is desperately trying to outrun her own pain. The sexual tension between June and Alice is immediate and ever-present. But what they need from each other transcends the physical. What does it mean to be truly "seen?" How do we pick up the pieces? How do we move forward?
Directed by renowned Austin phenom Rudy Ramirez, Alabaster stars Lizzie Beckham (Duchess of Malfi, The Rover) as June, Shannon Grounds (The Revolutionists, Agent Andromeda) as Alice, Jennifer Jennings (Wild Horses, Agent Andromeda) as Weezy, and the legendary Jennie Underwood as Bib.  Alabaster features costume design by Pam Fletcher Friday, lighting design by Jen Rogers, sound design by Malyssa Quiles, set design by Alex Casillas, prop design by Cortney DeAngelo, and stage management by Monica Kurtz. This initimate portrait of art and the lost and tortured souls that seek to create it won the David Calicchio Emerging American Playwright Prize, was chosen for the 2019 Kilroy’s List, and has just been nominated for the Pulitzer Prize.
SHREWD PRODUCTIONS joins eleven other partner theatre companies in this record-breaking, NNPN rolling world premiere. Other partnering theaters are FLORIDA REPERTORY THEATER, 16TH STREET THEATER (BERWYN, IL), CAPITAL STAGE (SACRAMENTO), KITCHEN DOG THEATER (DALLAS), KNOW THEATRE OF CINCINNATI, PHOENIX THEATRE (INDIANAPOLIS), WILLIAMSTON THEATRE (MI), SALT LAKE ACTING COMPANY, NEW JERSEY REPERTORY COMPANY (LONG BRANCH), and OREGON CONTEMPORARY THEATRE (EUGENE).
“Sometimes a piece just glues you to your chair, makes you laugh, rips your heart out, and when it's done you want to hold the people you love tightly and not let go.”
Tony Caselli, AD, Williamston Theatre
“Alabaster" is that one-in-a-thousand play that works both as a bittersweet comedy that's full of surprises and as a heart wrenching testament to what it means to be alive in an age of uncertainty.”
Joel Stone, Literary Manager, NJ Rep
“Scars of life. A talking goat! YES!!! This is theater at its best.”
Ann Filmer, Founding AD, 16th Street Theatre
About the Playwright
Cefaly is a southern writer and Alabama native based in the DC region. Her plays include The Gulf (Edgerton Award, Lammy Award, Samuel French OOB Fest Winner, Charles MacArthur Award Nominee); Alabaster (NNPN Showcase, David Calicchio Prize); Maytag Virgin (Women’s Voices Theater Festival); The Last Wide Open (Cincinnati Playhouse commission); The Believers (Eagle Theatre commission); The Story of Walter (digital podcast); Tell Me Something Good (UAB commission); and Love is a Blue Tick Hound (a collection of one-acts). Cefaly has developed plays with Signature Theatre, Serenbe Playhouse (New Territories), Aurora Theatre, Florida Rep, Vermont Stage, Theater Alliance, Quotidian Theatre Company and Contemporary American Theater Festival. She is published by Samuel French, Smith & Kraus (two volumes of Best American Short Plays), and Applause Books. She was recently named a Traveling Master by the Dramatist Guild Foundation. She is an outspoken proponent of silence in story-telling and has authored numerous articles on the topic of playwriting for HowlRound and Samuel French’s Breaking Character Magazine. Cefaly is a recipient of grants from the Boomerang Fund for Artists as well as the Alabama and Maryland state arts councils. | audreycefaly.com
About Shrewd:
Championing unique perspectives and emerging artists, Shrewd Productions is focused on women's voices, new plays, and work developed though a collaborative artistic approach.  We are committed to creating high-quality theatrical experiences that are thoughtful, provocative, and entertaining, featuring the work of female and LGBT artists as we seek to provide a broader array of voices in American theatre and for Austin audiences.
Shrewd has been honored over 70 nominations and multiple awards from the Austin Critic's Table, B. Iden Payne Committee, Broadway World, and Austin Theatre Examiner and inclusion on multiple “Best Of” lists in the Austin Chronicle.  We are proud to be a member of the Austin New Works Theatre Community, building Austin's professional theatre community devoted to the development of original work.

Recent productions include the world premieres/first productions of Jump by Charly Evon Simpson, The Madres by Stephanie Alison Walker, The Afterparty and Glassheart by Reina Hardy, Hold Me Well by Eva Suter, Emma When You Need Her by Rudy Ramirez and Ensemble, Liz Fisher's Deus Ex Machina, Katie Bender's Still Now, Jenny Connell Davis' The Dragon Play and Beth Burns' The Long Now as well as critically lauded productions of Megan Gogerty’s Lady Macbeth and Her Pal, Megan, Charles Mee's Big Love, Joshua Conkel’s multi-award winning MilkMilkLemonade, and a gender-fluid take on Shakespeare’s As You Like It. Previous Shrewd productions include the world premieres of Monika Bustamante's Io: a myth about you and Stillborn: a bedtime story, and Cyndi Williams' Where Are They Now?; regional premieres of Kidnapped by Craigslist by Katie Goan and Nitra Gutierrez and Trash Anthems by Dan Dietz; and original collaborations Cheater, Feast of Fools and Xmas Unwrapped.
About NNPN:
National New Play Network (NNPN) is the country’s alliance of non-profit professional theaters dedicated to the development, production, and continued life of new plays. Since its founding in 1998, NNPN has supported more than 250 productions nationwide through its innovative National New Play Network Rolling World Premiere program, which provides playwright and production support for new works at its Member theaters. Additional programs - its annual National Conference, National Showcase of New Plays, Travel banks and online information sessions - have helped cement the Network’s position as a vital force in the new play landscape. NNPN also strives to pioneer, implement, and disseminate ideas and programs that revolutionize the way theaters collaborate to support new plays and playwrights. Its most recent project, the New Play Exchange, is changing the way playwrights share their work and others discover it by providing immediate access to information on nearly 17,000 new plays by living writers. NNPN’s 30 Core and 80 Associate Members - along with the more than 250 affiliated artists who are its alumni, the thousands of artists and artisans employed annually by its member theaters, and the hundreds of thousands of audience members who see its supported works each year - are creating the new American theater. nnpn.org | newplayexchange.org
Alabaster has received generous support in the form of workshops, readings, and developmental funding from National New Play Network, Marin Theatre Company, Signature Theatre, Theater Alliance, Florida Rep, and Contemporary American Theatre Festival. 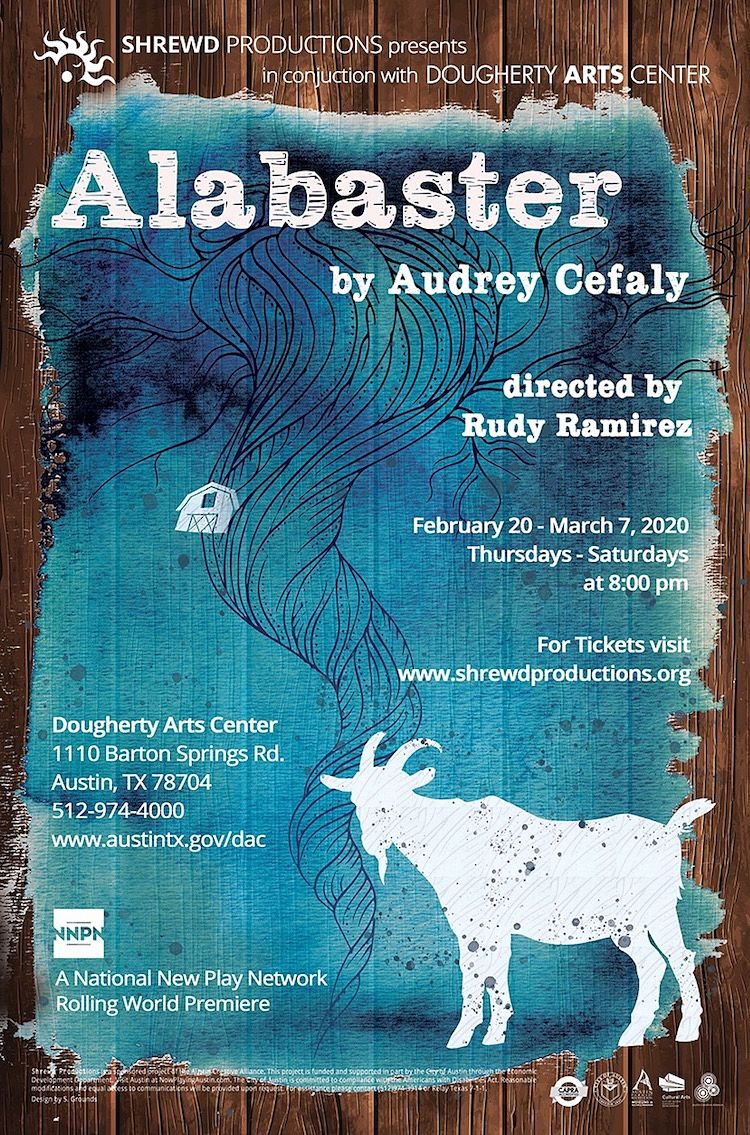