The Odyssey
by Austin Shakespeare

Six creative actors will bring to life scenes from the hero’s epic adventures in Austin Shakespeare’s new production of Homer’s The Odyssey at the Long Center’s Rollins Theatre.

Austin Shakespeare Artistic Director Ann Ciccolella promises an imaginative and entertaining 60-minute performance in the intimate Rollins theater, concluding in a Q&A with the director and actors.  “From fighting with cyclops to escaping the sirens’ song, the audience will share the trials of Odysseus, culminating in his homecoming,” Ciccolella, who adapted and directed the play, said. “This play will be suitable for students who have studied The Odyssey, as well as those who are new to it.”

Ciccolella said the play is appropriate for ages 10 and up when accompanied by an adult. “Kids will love this play – especially the sword fighting,” she said.

Homer’s The Odyssey stars Sam Grimes as Odysseus; Nancy Eyermann as his wife, Penelope; Justin Scalise as Zeus; Regan Goins as Athena, Matthew Wagner as his Odysseus’s son Telemachus; and Susan Myburgh as the nymph Calypso. Costumes designed by Benjamin Taylor Ridgeway, lighting by Patrick Anthony and sound by Matthew Smith. Stage combat directed by Riley Wesson, who was recently nominated for a Payne Award.

ABOUT AUSTIN SHAKESPEARE: Founded in 1984 and the only professional classical theater company in Central Texas, Austin Shakespeare presents theater of the highest quality with an emphasis on the plays of William Shakespeare, staging performances that are fresh, bold, imaginative, thought-provoking and eminently accessible -- connecting the truths of the past with the challenges and possibilities of today. In the fall and spring, Austin Shakespeare also produces plays with heightened language by writers such as Shaw, Schiller, and Stoppard as a resident company of The Long Center for the Performing Arts Rollins Studio Theatre. Austin Shakespeare’s “Artist’s Way” sessions invite new participants weekly and the company’s education program 20/20 sends professional actors into the schools to encourage love of language utilizing scenes from Tennessee Williams’s The Glass Menagerie. In 2018, Austin Shakespeare was honored with a grant from the prestigious Bloomberg Philanthropies’ Arts Innovation and Management (AIM) program.

The Odyssey
by adapted from Homer
Austin Shakespeare 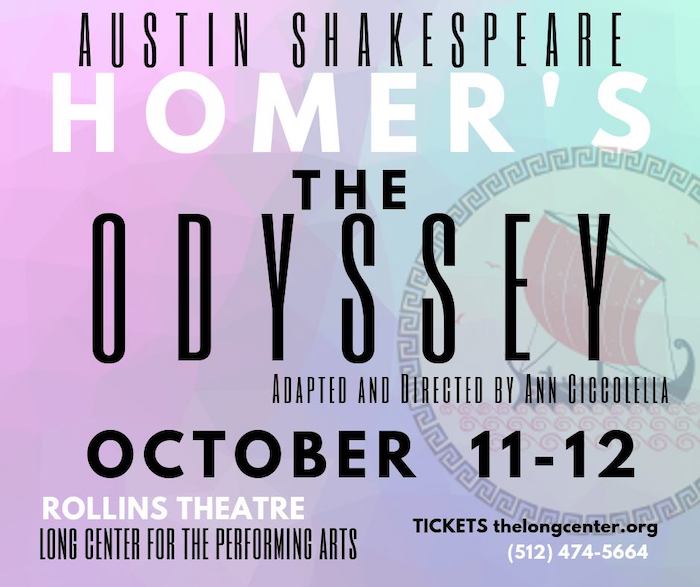