Sam Bass Theatre, the premiere theatrical venue for Round Rock, Texas, is pleased to present "Alice in Wonderland", a "theatrical marvel" that was created by famed American director Andre Gregory and the Manhattan Project, and re-imagined for the Old Depot Stage by director Ashley Zeh-Perez.

The original production was created by Gregory and his company through a months-long improvisation period based on Lewis Carroll’s "Alice’s Adventures in Wonderland", "Through the Looking-Glass", and "What Alice Found There". The end result is an avant-garde, exuberant and funny variant of Carroll's classic that is decidedly not the Disney-fied version with which most of us are familiar.

"I was really drawn to this version of 'Alice in Wonderland' because it has all the traditional things we love about the story, but is done in a newer, darker way", Perez says. "It is a very ensemble-driven show and we’ve been able to create a lot of super interesting moments that I’m excited for everyone to see."

Tickets for the opening night gala on April 5 are $20. For the remainder of the run, tickets are $13-$15, with discounts available for students and educators, teachers, military members and first responders. 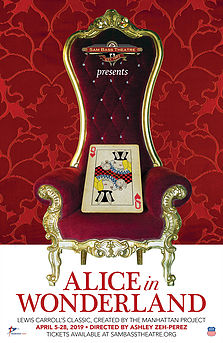