“To whom should I complain? If I told them who would believe me?” says the young Isabella in a new translation of Shakespeare’s Measure for Measure by Aditi Kapil.

Austin Shakespeare, in collaboration with the Harry Ransom Center, presents a staged reading of a new verse translation of Shakespeare’s Measure for Measure, which was commissioned by the Play On! Series of Oregon Shakespeare Festival.

Presented for one night onl, this Measure for Measure was translated into modern English by Aditi Kapil. It is one of 39 plays for which that Oregon Shakespeare invited diverse voices to translate Shakespeare’s works into contemporary language. After the show, Oregon Shakespeare Festival Associate Producer Taylor Bailey will host an audience “Talk Back” session.

“Measure for Measure celebrates glorious language, captivating characters and an ingenious plot in a world of lusty licentiousness,” said Artistic Director Ann Ciccolella. Young novice Isabella defies the seemingly puritanical government official Angelo when he attempts to seduce her. University of Texas theater faculty member Andrew Carlson stars as the Duke, who, in disguise, observes and devises the memorable conclusion. Carlson served as dramaturg in the transformation of Shakespeare’s original language to Kapil’s new script.

“The story examines the vicious abuse of power that leaders commit when they think no one is looking,” said Ciccolella, who worked on the play’s development during a UT workshop. “We are proud to bring this fresh look at a timely story to Austin.”

Aditi Brennan Kapil is a writer, actress and director of Bulgarian and Indian descent. Her play Love Person, a four-part love story in Sanskrit, American Sign Language and English, received the 2009 Stavis Playwriting Award. Kapil’s Displaced Hindu Gods trilogy consists of: Brahman/i: a one-hijra stand-up comedy show; The Chronicles of Kalki; and Shiv. The internationally produced plays, based on the Hindu trinity of Brahma, Vishnu and Shiva, premiered in repertory at Mixed Blood Theatre, and Brahman/i and The Chronicles of Kalki received an unprecedented double nomination for the James Tait Black Prize, University of Edinburgh, U.K. For the 2016-17 season South Coast Repertory (SCR) commissioned and premiered Kapil's play Orange at Mixed Blood Theatre as well as at SCR. Yale Repertory Theatre commissioned her play Imogen Says Nothing in the same season. She is currently working on a commission with La Jolla Playhouse.

From the Oregon Shakespeare Festival: “By seeking out a diverse set of playwrights (more than half writers of color and more than half women), we hope to bring fresh voices and perspectives to the rigorous work of translation.”

Performed with support from the Hitz Foundation.

Click for audio recording of dialogue between Aditi Brennan Kapil and Liz Engleman about recrafting Measure for Measure, at stateofshakespeare.com, October 17, 2017

Feature by Robert Faires in the Austin Chronicle, December 6, 2018 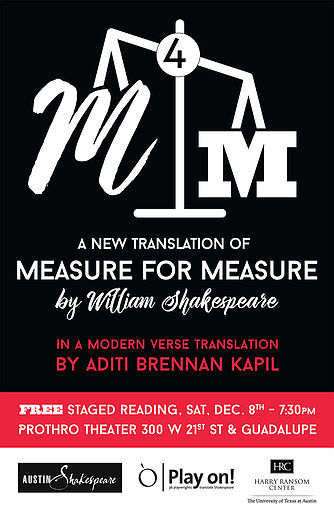