Sam Bass Theatre is thrilled to announce our upcoming production of A Streetcar Named Desire, Tennessee William’s classic drama about family relationships, the fragile mind, and survival in a difficult world. Sam Bass Theatre is also proud to kick off our 44th season on the Old Depot Stage making Sam Bass Theatre the oldest consistently running theatre in Williamson County, and one of the oldest in the state.

Originally produced in 1947, A Streetcar Named Desire is widely regarded as Tennessee William’s greatest piece of theatre. The play was well received upon its inception, winning Pulitzer Prize for Drama in 1948. The play opened on Broadway on December 3, 1947, and closed on December 17, 1949, in the Ethel Barrymore Theatre. A Streetcar Named Desire tells the story of Blanche DuBois, a fragile and neurotic woman on a desperate prowl for someplace in the world to call her own. After being exiled from her hometown for getting tangled up with one of her young students Blanche lands on her sister Stella’s front door. This, she claims, is the result of a series of financial calamities which have recently claimed the family plantation, Belle Reve. Stanley, a sinewy and brutish man, is as territorial as a panther. He tells Blanche he doesn't like to be swindled and demands to see the bill of sale. Blanche's efforts to impose herself between them only enrages the animal inside Stanley. Yet, as rumors of Blanche's past in Auriol begin to catch up to her, her circumstances become unbearable.

A Street Car Named Desire is directed by Olin Meadows, who serves on the Board of Directors for Sam Bass Theatre as Artistic Director. Mr. Meadows has directed the critically acclaimed Steel Magnolias, the ground-breaking Sam Bass production of “The Crucible” and most recently starred in the Sam Bass Theatre New Year’s Eve Show “An Evening in Storyville” as Saffire T. Stone a role that has earned Mr. Meadows many awards and accolades over the past 13 years.

“This play is so widely known, and for good reason,” said Mr. Meadows. “Tennessee created a story that so many people can relate to, the themes of sexual addiction, domestic violence, and mental illness make this a timeless tale.” Mr. Meadows goes on to explain “to expand on the timelessness of this story we are approaching Streetcar in a new way, incorporating technology and modern theatrical conventions into the show to create a new streetcar that will resonate with audiences in 2017.”

Sam Bass Community Theatre (SBCT) has been offering quality live theater to the Round Rock/Georgetown/Austin area for over forty years. Proud to be the first theatre company in Round Rock, SBCT strives to create thought provoking, entertaining, and enchanting live theatre all year long. We respect, value and celebrate the unique attributes, characteristics and perspectives that make each person who they are. We also believe that bringing diverse individuals together allows us to collectively and more effectively contribute to the development of the arts in Central Texas.

Performances are Fridays and Saturdays at 8:00pm and Sundays at 2:00pm. Pre-Sale tickets are available until August 25th for $18.00 for adults and $14.00 for Students and Seniors. 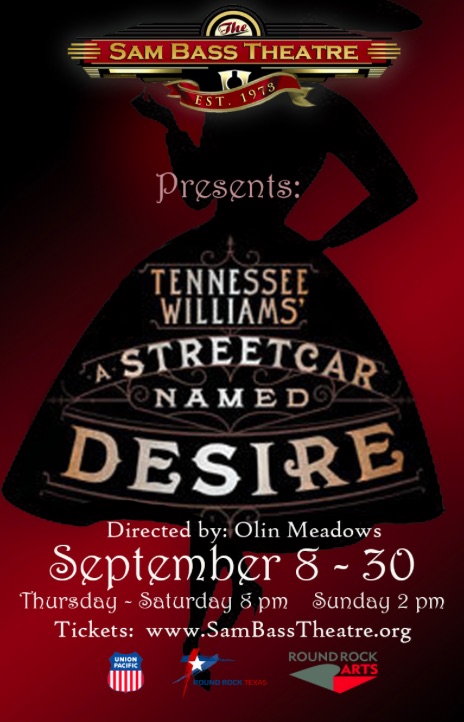