The Comedy of Errors
by Austin Shakespeare

Austin Shakespeare’s Free Shakespeare in the Park production is a rollicking and rambunctious fresh look at The Comedy of Errors from guest director, Robert Ramirez, head of the acting program at the University of Texas Department of Theatre and Dance. Produced in collaboration with the City of Austin Parks and Recreation Department for the 34th year, The Comedy of Errors will be performed under the stars at the Beverly S. Sheffield Zilker Hillside Theater from Thursday – Sunday at 8 pm, May 4 – May 28 with a preview performance on Wednesday, May 3.

Set in a colorful ancient world at the crossroads of cultures, The Comedy of Errors is a fast-paced tale of mistaken identities where two pairs of twins are reunited in a surprising turn of events! The comic twin Dromios are performed by Hannah Rose Barfoot, who also played a witch in last summer’s Macbeth, and Madison Weinhoffer, who is new to Austin Shakespeare. Their masters are Tony Salinas, who has performed in Shakespeare in the Park for the past two summers, and Toby Minor, who appeared in Present Laughter last fall at the Rollins Theater, where Austin Shakespeare is a resident company. Marc Pouhé, who played the title role in Macbeth, will play Egeon, the long-lost father.

New to the company are Katherine Lozano as Antipholus’s wife Adriana; Taji Senior as her sister Luciana; Catherine Grady as Duke Solinus; John Christopher as Balthazar; and Jesus Valles as Dr. Pinch, the conjuring schoolmaster. Other Austin Shakespeare Alumni include: Quinn Lara as the merchant; Kristofer Adkins as the goldsmith Angelo; Roxy Becker as the Courtesan and Alison Stebbins as the Abbess with a surprising secret.

Guest Director Robert Ramirez commented, “I see Ephesus as a port city: a sort of crazy crossroads and bustling marketplace for the exchange of goods and money, teeming with action and prone to mayhem. The open air theater in Zilker Park is the perfect setting for this quick-paced comedy of mistaken identities filled to the brim with both physical humor and snappy banter with a cast of very memorable characters.”

ABOUT ROBERT RAMIREZ: Robert has worked as Voice/Text/Dialect coach at a number of theaters including Illinois Shakes, American Players Theatre, and the Krannert Center for the Arts. Most recently he served as Voice and Text Director of The Yeoman of the Guard and the world premier of The River Bride at the Oregon Shakespeare Festival. He has performed as an actor with the New York, Utah, Illinois, Great River, Alabama, Baltimore and Wisconsin Shakespeare Festivals. Robert is the Head of the Acting Program in the department of theatre and dance at the University of Texas Austin. 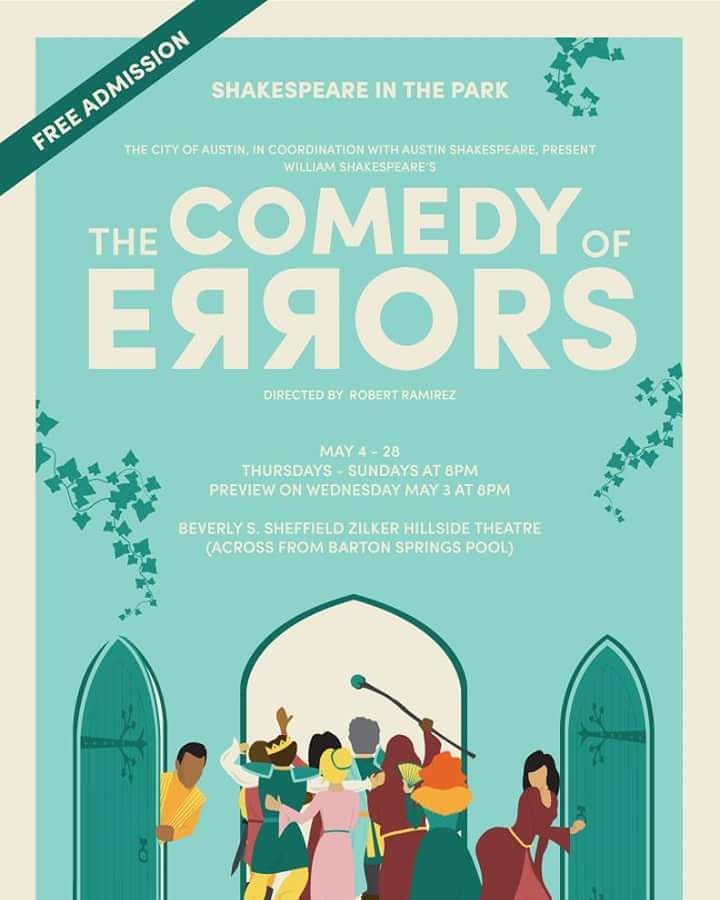