The Daughter of the Regiment
by Austin Opera

High comedy, romance and vocal fireworks. Marie (Rachele Gilmore), the adoptive daughter of 1,500 soldiers of a French army regiment, is the charming tomboy who has fallen in love with the handsome Tonio (René Barbera). Only by joining the regiment can the young local man be deemed fit by Marie’s “fathers” to win her hand.

Meanwhile, the Marquise of Birkenfeld (Cindy Sadler) knows the truth of Marie’s aristocratic birth and seeks to sweep the ingénue away from her regimental family and introduce her to high society and a marriage befitting her rank. Tonio must prevail over his lowly station if he and Marie are to find their way to love, against a backdrop of bel canto pyrotechnics, including Tonio’s famous tenor aria, “A mes amis,” marked by nine perilous high Cs.

The music of Donizetti’s masterpiece will be sung in French, mixed with a sparkling new English dialogue. Rod Caspers directs.

An opera in two acts, sung in French with English dialogue and English supertitles projected above the stage. 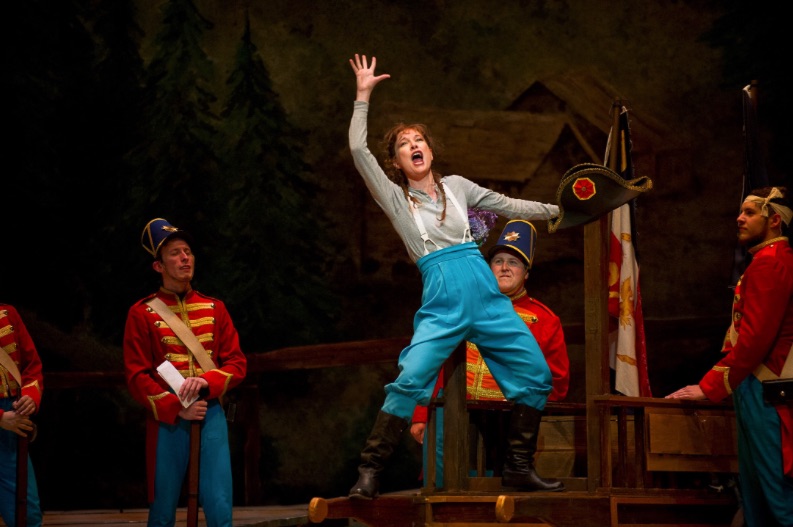 The Tyrolean mountains. On their way to Austria, the terrified Marquise of Berkenfield and her butler, Hortensius, have paused in their journey because they have found the French army blocking their way. When the marquise hears from the villagers that the French troops have at last retreated, she comments on the crude ways of the French people (“Pour une femme de mon nom”). Hortensius asks Sulpice, sergeant of the 21st regiment, to let the marquise continue on. Sulpice is joined by Marie, the mascot, or “daughter,” of the regiment, which adopted her as an orphaned child. When Sulpice questions her about a young man she has been seen with, she explains that he is a local Tyrolean who—though an enemy—once saved her life. Troops of the 21st arrive with a prisoner: this same Tyrolean, Tonio, who says he has been looking for Marie. She steps in to save him, and while he toasts his new friends, Marie sings the regimental song (“Chacun le sait”). Tonio is ordered to follow the soldiers, but he escapes and returns to declare his love to Marie. Sulpice surprises them, and Marie must admit to Tonio that she can only marry a soldier from the 21st.

The Marquise of Berkenfield asks Sulpice for an escort to return her to her castle. When he hears the name Berkenfield, Sulpice remembers a letter he discovered near the young Marie when she was found. The marquise soon admits that she knew the girl’s father and says that Marie is the long-lost daughter of her sister. The child had been left in the care of the marquise, but was lost on a battlefield. Shocked by the girl’s rough manners, the marquise is determined to take her niece to her castle and to give her a proper education. By now, Tonio has enlisted so that he can marry Marie (“Ah, mes amis”), but she has to leave both her regiment and the man she loves (“Il faut partir”).

The marquise has arranged a marriage between Marie and Scipion, nephew of the Duchess of Krakenthorp. Sulpice has joined the marquise at the Berkenfield castle, recovering from an injury. The marquise hopes he can help with her plans for Marie. The marquise gives Marie a singing lesson, accompanying her at the piano. Encouraged by Sulpice, Marie slips in phrases of the regimental song, and the marquise loses her temper (Trio: “Le jour naissait dans la bocage”). Left alone, Marie thinks about the meaninglessness of money and position (“Par le rang et l’opulence”). She hears soldiers marching in the distance and is delighted when the whole regiment files into the hall. Tonio, Marie, and Sulpice are reunited. Tonio asks for Marie’s hand, declaring that Marie is his whole life (“Pour me rapprocher de Marie”), but the marquise declares her niece engaged to another man and dismisses Tonio. Alone with Sulpice, the marquise confesses the truth: Marie is her own illegitimate daughter whom she abandoned, fearing social disgrace.

Hortensius announces the arrival of the wedding party, headed by the Duchess of Krakenthorp. Marie refuses to leave her room, but when Sulpice tells her that the marquise is her mother, the surprised girl declares that she cannot go against her mother’s wishes and agrees to marry a man that she does not love. As she is about to sign the marriage contract, the soldiers of the 21st regiment, led by Tonio, storm in to rescue their “daughter.” The noble guests are horrified to learn that Marie was a canteen girl, but they change their opinion when she describes her upbringing, telling them that she can never repay the debt she owes the soldiers. The marquise is so moved that she gives her daughter permission to marry Tonio. Everyone joins in a final “Salut à la France.”

The Daughter of the Regiment
by Gaetano Donizetti
Austin Opera

The Long Center for the Performing Arts 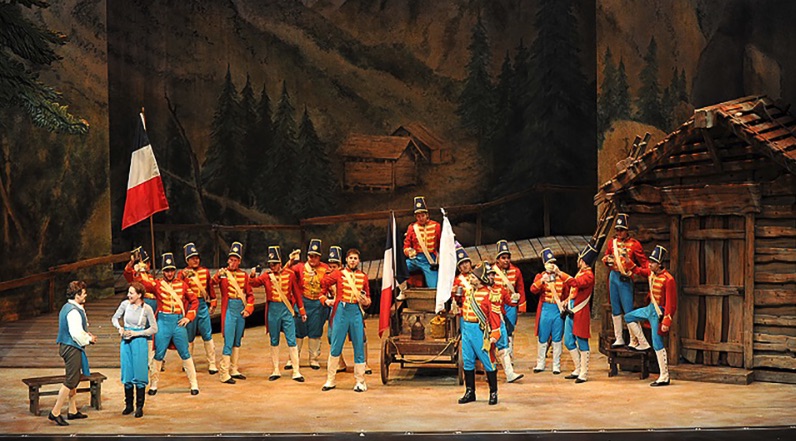 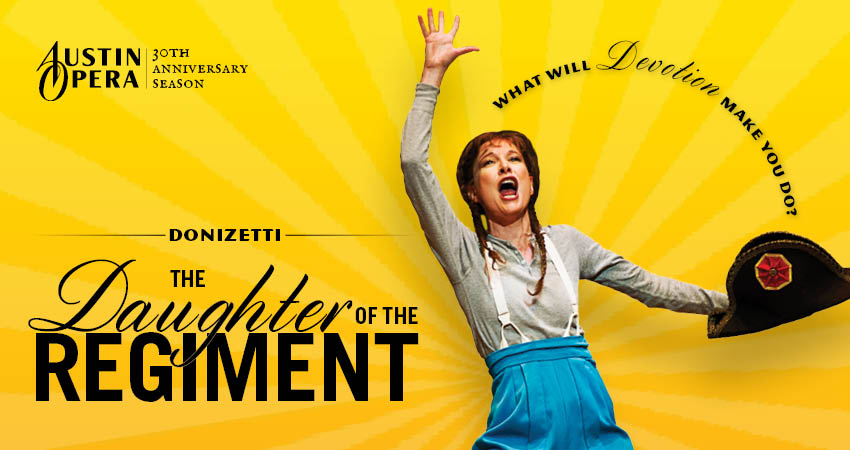